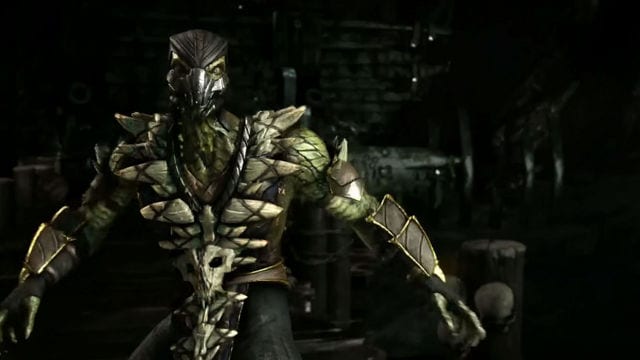 Reptile, taking halitosis to extremes since 1992.

Some of us remember back in the day when a new machine showed up at our laundromat, Pizza Hut, or airport. It stood there, emblazoned with intense looking characters and sending sounds of pain and conflict streaming out of it. That was Mortal Kombat. Now, over 20 years later, we’re still punching heads off, ripping out guts and tearing spinal cords in half in Mortal Kombat X.

What would Mortal Kombat be if it had a sluggish, unresponsive control set? No idea. MKX refuses to show us. Get ready to beat the crap out of your d-pad (using the left stick feels a bit sloppy, as it does with most fighters) and mash out some combos. Each face button has an attack assignment, each of which can be modified to strike a different “zone” of your opponent – i.e., a neutral standing block can be bypassed by a ducking opponent performing a low move.

Mortal Kombat has always had pretty daunting combo inputs, but here there are plenty of “low-tier” combos for less advanced players. With a bit of practice, however, it becomes almost second nature to trap an enemy in a brutal combo that robs them of half their health bar.

Of course, if your opponent is well prepared, they can perform a “Kombo Breaker” by holding the movement button toward their opponent while holding R2. If your super meter is charged at the bottom of your screen, you can enhance your special moves by pressing R2 while inputting the final button for the move sequence. This will consume one of your three meter segments. Pressing L2 and R2 at the same time brings about an X-Ray move, a high-damage attack that usually ends up with pieces of you piercing through pieces of them… in slow motion.

Damn! Mortal Kombat X is simply beautiful, even with all the viscera flying about the screen. Fighters shimmer with sweat while decorating the chosen arena with splashes and smatterings of blood of multiple shades — fights between Reptile and newcomer D’Vorah are particularly colourful!

Initially, Mortal Kombat gained its fame from how gory it was. In the latest release, we’re treated to some of the bloodiest, most disgusting and creative fatalities we’ve ever seen. One great example of the detail outside (and inside) each character is the Scorpion fatality in which he slices off his opponent’s face. After slumping to the ground, we can see severed nasal cavities, a twitching tongue, and a large portion of grey matter slide away from its casing. It’s horrendous and beautiful at the same time.

Animation sets are also detailed in the extreme, and the frame data of any given move is integral to fighting effectively as your chosen character. The various battle arenas are decked to the nines as well, featuring anything from snow falling down peacefully between blows to a flowing river reflecting the chaos above.

All of the flesh ripping, crunching of bones and yelps of pain are both effective and cringe-worthy. What is not cringe-inducing this time around is the voice acting during the story. Sure, there’s going to be some corny dialogue (to go with the corny story, corny characters, etc.), but it’s all performed with great gusto that engages you from the very beginning.

The musical score accompanying the punches and fireballs is pulse pounding and very well done, but it definitely takes a back seat while all the gore and particle effects sit up front.

Mortal Kombat X is a testament to the franchise’s will to exceed our expectations. We know that when a new Mortal Kombat title comes out, it’s safe to say that it’ll be fun, but not in a next-level kind of way. It’s hard to make a fighter like that.

What the folks over at NetherRealm did this time around was not only include a well written story, but also a wonderful addition called “The Faction War.” Upon beginning MKX, you must choose between one of five opposing factions, such as the Lin Kuei or Black Dragon. Everything you do after that will contribute to your faction’s score, and at the end of a week a winner is declared. If you’re part of the winning team, you’ll receive bonus Koins to spend in the Krypt for unlocks.

That’s not to say it’s easy to bust out a game-ending kombo, but noobs and veterans alike are going to find a deep experience that ultimately rewards practice and study. Sure, there are still some characters that haven’t really changed over the years (Sub-Zero, Scorpion, we’re looking at you), but we think it’s a good thing not to completely reinvent someone or something that’s fine the way it is. Plus, the series is known for having those two perpetually locked in battle!

It’s also worth bringing up that brutalities have made a comeback as well, and add extra tension to a fight. Back in Ultimate Mortal Kombat 3, performing a brutality was done at the “FINISH HIM!” screen. Now, brutalities are basically special moves timed just right.

For example, to do one of Raiden’s brutalities you must teleport him at least 10 times during the match and perform an enhanced version of one of your moves. For a Reptile brutality, you may have to land 10 acid spits and finish off the match with one. All in all, brutalities make a fun and intense return to the series.

Each character, old and new, has three distinct variants to choose from. For example, you select Sub-Zero. Now you can pick between the Grandmaster, Cryomancer, or Unbreakable variations. Grandmaster can create an ice clone, but inputting the same button combo while playing as Cryomancer will have Sub-Zero swing a giant ice mallet. Each of these have different special moves focusing on different play styles, so there’s a metric ton of variety added to the fights.

As it stands, Mortal Kombat X wears a large crown that’ll be difficult to knock off. It’s just a solid fighter, one that us hardcore fans both wanted and felt (selfishly) entitled to. Plus, as always, MKX is a great game for passing the controllers between friends in your own home, or testing your skills online against the world. Now get over here!

By Jeff Cater
Tags: D'Vorah, Mortal Kombat, Mortal Kombat X, NetherRealm, Pizza Hut, Reptile, Scorpion
This entry was posted on Thursday, April 30th, 2015 at 1:48 am and is filed under Jeff Cater, Video Game Reviews. You can follow any responses to this entry through the RSS 2.0 feed. Both comments and pings are currently closed.