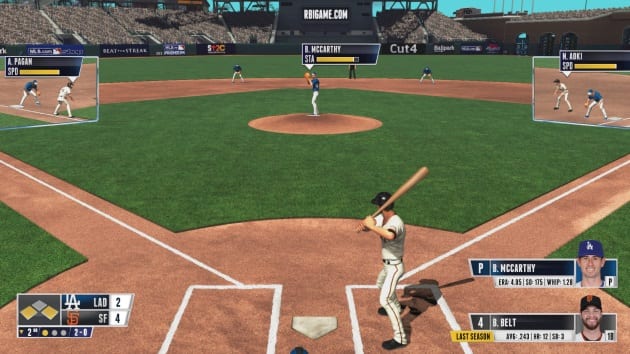 There is just one difference in these controls from last year: The option (key word being “option”… we’ll explain later) to throw to bases based off their buttons rather than holding a direction on the d-pad and the “X” button now exists. So circle throws to first base, triangle throws to second, etc. This is a significant improvement to base running and makes it far more enjoyable than before. Other than that, just go back and read last year’s review to understand the controls.

RBI Baseball 2014 had pretty good graphics for a downloadable title. It had nothing on The Show, but fans of the sport would enjoy how closely the visuals and noises match the ballpark for what they’re paying. And 2015 is basically more of that, but a little cleaner and more polished. To notice improvement to a forgettable title that quickly is a success in our book.

Honestly, we played this game a year ago and our review still describes it pretty well. There is only one notable change: As mentioned, there is now an option to map each base to a face button. Yet for some bizarre reason this is not the default option, and the game does nothing to indicate you can change the settings. In a title that focuses on simple, pick-up-and-play style gameplay, this is a huge issue.

Rather than rehash what we wrote a year ago, we’ll do something productive — discuss how the execution meshes so poorly with the intentions of the game. RBI Baseball ’15 is meant to be an arcade game, not a sim. It should be a game that you’re able to pick up and know how to play instantly, like how Mario sports games work.

Instead, RBI offers design choices that go against this. A fly ball, for instance, does not indicate in any way where you need to be to catch it other than a circle that gradually grows smaller as it gets closer to the ground. With a lot of practice, you’ll eventually become familiar enough with this, knowing exactly how far to run. Early on, however, it’s impossible to tell if you should be running as far back as possible, standing where you need to be, or just inching back a little bit. Guess wrong and the ball will drop.

Another example is the transition from pitching to fielding. It’s too immediate, giving no time to react to the ball if you’re an infielder. Practice can help with this, but the game has some very frustrating fielding options — especially when played against the computer, which has no issues with this issue.

These issues have nothing to do with difficulty, they are about accessibility. MLB: The Show has these hurdles as well, but its mechanics, physics and depth are geared more towards a sim type baseball experience. You’re meant to spend dozens of hours mastering the game, not immediately pick up a controller and know how to play it.

RBI Baseball lacks the depth and realism off The Show, and without gameplay decisions to complement this choice, it results in a frustrating, annoying game.

It’s one thing to make a first effort that misses, yet has good intentions. We’ll still critique the hell out of it, but only because we want improvement. When a sequel thinks it’s acceptable to just make minor tweaks to a flawed formula, however, that’s when we have a problem. Is RBI Baseball ’15 better than last year? Absolutely. But “better” and “good enough” are very different things.

By Casey Curran
Tags: Madden, RBI Baseball 15
This entry was posted on Sunday, April 12th, 2015 at 4:43 pm and is filed under BASEBALL, Casey Curran, Video Game Reviews. You can follow any responses to this entry through the RSS 2.0 feed. Both comments and pings are currently closed.