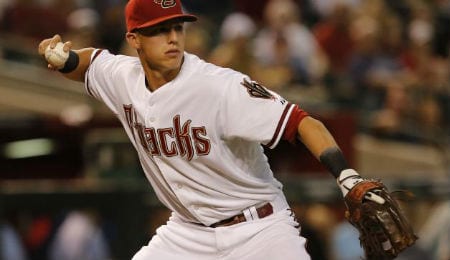 Welcome back for another season of Fantasy baseball and the Wire Troll, folks. It’s only April, but the boys of summer are back in full swing, which means it’s never too early to start scanning the waiver wire for some hidden Fantasy gems to get your team off to a hot start.

Jake Lamb, 3B, Arizona Diamondbacks (ESPN: 15.8 per cent; CBS: 43 per cent): Lamb is roasting opposing pitching (see video below) to the tune of seven RBI in his first three games. He will get ample opportunities for the young but potent D-back offense, even if his .857 slugging percentage is setting the bar a little high.

Jake Marisnick, OF, Houston Astros (ESPN: 0.2 per cent; CBS: 16 per cent): Former Marlin Marisnick got on the board in a big way Friday against Texas, tallying his first three hits of the season. He also has three RBI and a stolen base and could provide solid depth to your outfield rotation. There’s major upside here, kids.

Randal Grichuk, OF, St. Louis Cardinals (ESPN: 0.2 per cent; CBS: 4 per cent): Trust us when we say that this guy is one beam of daylight away from breaking out big time. After a tremendous spring, Grichuk is still crammed into a tight outfield squeeze in St. Louis, but has big-time power potential and should a Cardinals outfielder go down, he could post big numbers playing every day. Stash him if you’ve got the room.

Anthony Gose, OF, Detroit Tigers (ESPN: 19.7 per cent; CBS: 35 per cent): Expect these ownership numbers to spike quickly for Gose, whose playing time will only increase after taking full advantage of his platoon opportunities with Rajai Davis. Gose’s first three games were sparkling, and he can provide plenty in the way of speed, average and OBP.

Tommy Milone, SP, Minnesota Twins (ESPN: 0.3 per cent, CBS: 10 per cent): Milone has always had the skills, and he isn’t simply trying to survive in a stocked rotation as was the case in Oakland. He was nearly flawless in his first start of 2015 and he could build on last year’s 2-1 K-BB ratio. Ervin Santana’s suspension and Ricky Nolasco’s injury pretty much solidifies Milone’s job for at least half the season, too.

Junichi Tazawa, RP, Boston Red Sox (ESPN: 0.6 per cent, CBS: 5 per cent): We’re not quite sure why Tazawa wasn’t the closer all along with Koji Uehara still out for a few more games, but Tazawa could see some save situations with the struggles of Edward Mujica. Even when Uehara does return, Boston will likely reduce his workload, so strikeout machine Tazawa (who averaged better than a K per inning last year) should maintain value for a little while.

Jarred Cosart, SP, Miami Marlins (ESPN: 1.9 per cent; CBS: 25 per cent): We “bet” that Cosart will provide quality innings this year. After being fined for illegally gambling on sports, he posted a quality start on Saturday against Tampa Bay and last year gave up fewer hits than innings pitched.

Mark Canha, OF, Oakland Athletics (ESPN: 2.4 per cent; CBS: 16 per cent): Seriously, who is this guy? What a first impression this Rule 5 Draft pick has made for a team that is always uncovering gems that get zero credit nationally. Canha went 7-for-14 with a homer and six RBI in his first three games.

Michael Taylor, OF, Washington Nationals (ESPN: 0.9 per cent; CBS: 33 per cent): Taylor has shown some flashes filling in for the injured Denard Span. Taylor is not really a power threat (though he did go deep last week), but he’s got speed and on-base potential and, frankly, has been the only consistent bat for the offensively-challenged Nats so far.

Dillon Gee, SP, New York Mets (ESPN: 1.5 per cent; CBS: 26 per cent): Gee is the fifth starter for the Mets since Zack Wheeler’s injury and is looking to reinvent himself after being plagued by injuries and inconsistency.

Alex Avila, C, Detroit Tigers (ESPN: 42.6 per cent’ CBS: 43 per cent): Avila, who already has six runs and a dinger, should be fine as along as he can avoid concussions.

Dalton Pompey, OF, Toronto Blue Jays (ESPN: 10 per cent; CBS: 50 per cent): Pompey is shaking off a slow start with four runs in the past three games and his first career homer Sunday.

Jeurys Familia, RP, New York Mets (ESPN: 12.1 per cent; CBS: 43 per cent): Thanks to Jennry Mejia’s suspension, Familia is now the closer for the Mets and he recorded two outs for this first save Sunday.

Cody Asche, 3B, Philadelphia Phillies (ESPN: 0.4 per cent; CBS: 10 per cent): The former Nebraska star is getting on base 50 per cent of the time. What else does he have to do to secure the hot corner in Philly?

Jose Urena, SP, Miami Marlins (ESPN: unowned; CBS: 1 per cent): If Henderson Alvarez’s MRI shows any damage to his elbow, Urena could get the call from Triple-A. Urena’s first career Triple-A start was a walk in the park as he yielded just one run in six innings, whiffing five. He finished second in the Southern League with 121 Ks last year.

Aaron Barrett, RP, Washington Nationals (ESPN: 0.2 per cent; CBS: 3 per cent): Barrett earned his first win of the season Sunday with a perfect inning. He’s already whiffed five in 2 2/3 IP and is looking like he can be one of those very valuable non-closing relievers. Grab Barrett now before everyone else clues in.

By Michael Seff
Tags: Arizona Diamondbacks, Houston Astros, Jake Lamb, Jake Marisnick, Miami Marlins, Randal Grichuk, St. Louis Cardinals, Texas Rangers
This entry was posted on Sunday, April 12th, 2015 at 9:02 pm and is filed under BASEBALL, Michael Seff, The Wire Troll. You can follow any responses to this entry through the RSS 2.0 feed. Both comments and pings are currently closed.