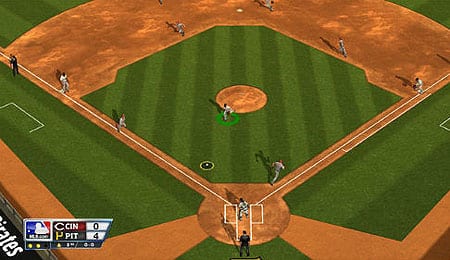 Not pictured: Empty stands while these two teams play.

It feels like just another day at Edison Field. Albert Pujols is striking out. Josh Hamilton is making error after error. Jered Weaver is… wait, why is Weaver throwing home runs at everyone? Why is Erick Aybar not tagging up during a pop fly? Why did Mike Trout just hit a ball only two feet in front of himself? Oh wait, this is just RBI Baseball 14, in which playing as my Angels is more painful than watching them.

RBI Baseball 14 goes retro in an attempt to induce nostalgia from fans of the NES original. Pitching and hitting are both based around using one button in combination with the left analog stick for fancy tricks, so don’t expect to bunt or see a button to pitch a slider here. The issue, however, is that the game never properly explains how either of these work. There is no tutorial while the control explanations from the menu simply show that the “A” button is used for pitching while the analog is used for “directional controls.”

While RBI Baseball 14 has nothing on the now-defunct 2K series, much less The Show, it captures the look of a baseball stadium as well as a budget game can. The crowds sound authentic, the stadiums look very much like their real world counterparts, and the developers even did a good job of capturing the builds of each player, right down to Pujols’ chubby frame. All things considered, it looks and sounds pretty great.

To see our favourite sport turned into… this. It just feels wrong. As soon as we fired up the game, we knew something was amiss. We started and one second in, before we had any time to get settled and react, a pitch flew right by us. After that, things did not get better as we struggled to tell the difference between a ball and a strike until it was too late to swing.

Once we took the field, things did not improve at all. We had no clue what trick the AI was pulling to ensure it could consistently pitch in the 90s and aim wherever it wanted to. Balls hit presented their own strange challenge. Due to the fast-paced nature of fielding, it is necessary to immediately move towards the ball. This presents trouble as it is also necessary to guess which player you will be controlling right away. If the ball is in an area where it could be either the shortstop’s or third baseman’s duty, for instance, it is easy to get confused and run in the opposite direction you need to.

When controlling outfielders, this was not an issue. However, the outfielders presented complications of their own. Whenever a ball was hit in the air, it showed where it was currently hovering over, but not how high it was (thanks to the bird’s eye view) or where it was heading. Again, this required guess work on whether to move back as far as possible or be more conservative and hope the ball would land nearby. To make matters worse, fielders run unbearably slow, so once we were committed, there was no going back.

Throwing the ball does not present a smooth transition from running. Throwing requires pressing towards the direction of the matching base with the “A” button (meaning throwing to second requires up and “A”). However, if we were running to our left and needed to throw to first base, we would often not be able to translate from run to throw soon enough and ended up throwing to third base.

We would like to say this game is an exception or that we still needed to adjust to a learning curve. But it was not. Every single game was more or less exactly like the first game we played. In the few instances when we managed to miraculously keep up with the other team, the rubber band AI would step in and pretty soon everyone was hitting home runs like they were singles. That we even managed to finish the games we played is nothing short of a miracle, as we were tempted to rage quit at least three times every single game. It made us glad the only other option was a season mode, which mostly just places a greater emphasis on pitcher management.

RBI Baseball 14 is a perfect example of getting what you paid for. It is cheaper than The Show, but it lacks the polish, depth, modes, fun, and, well, pretty much everything that makes The Show a great baseball sim. Oh, and its default choice whenever we pick a team is the Red Sox, making this game lucky we didn’t give it a zero (even though it’s RotoRob’s favourite team).

Now it’s your turn. Let us know in the comments below what your impressions of this game were.

By Casey Curran
Tags: Albert Pujols
This entry was posted on Saturday, May 24th, 2014 at 11:30 pm and is filed under BASEBALL, Casey Curran, Video Game Reviews. You can follow any responses to this entry through the RSS 2.0 feed. Both comments and pings are currently closed.