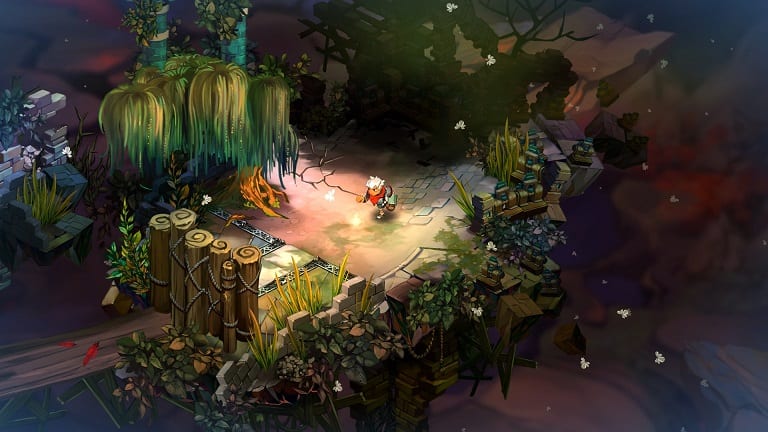 The Kid has never looked sharper.

Nearly four years have passed since SuperGiant Games released their debut title, Bastion, as part of Microsoft’s now-defunct Summer of Arcade. Its release on the PlayStation 4 serves not only as a chance for PlayStation loyalists to finally play the game, but also a reminder of just how far the balance of indie power has shifted on the current generation of consoles.

My least favourite aspect of the 360 release, Bastion’s controls don’t appear to have changed at all and still feel a little sloppy. Melee combat is much stronger than ranged as you’ll nimbly roll in and out of danger, mixing strikes with shield thrusts (L2 or right stick) to balance your attack and defense.

Distance fighting works as long as you get the proper lock, illustrated by a dashed line, but when there are a lot of enemies it can be cumbersome to manually cycle through targets via the shoulders. You can approximate free aiming with the right stick shield command, though that workaround is only viable versus stationary and/or long-range enemies — at which point it seems pointless.

One of the few differences between the PS4 and Xbox 360 versions is visual, as the game now outputs at 1080p at a steady 60 fps. Meanwhile, its art direction remains impressive with the effect of the environment rising up to form in front of your feet still a sight to behold. There’s a wonderful blend of colours, and the game somehow manages to keep everything easy to track even as the screen grows increasingly busy with enemies and their projectiles.

If your introduction to SuperGiant Games came from the excellent Transistor, you should be able to recognize where the musical groundwork began. Bastion features a wonderful, immersive soundtrack that consistently conveys the appropriate mood as you traverse the ruins of a once bustling world. The game’s narrator offers measured accompaniment to deliver the story along the way.

Bastion’s story doesn’t really cover new ground and is a bit lacking in comparison to its presentation. It’s also quite linear, essentially breaking down into “go here, defeat your enemies and grab a shard” with little deviation from the main path. Each time you return you’ll erect a new building to aid you on your quest. There are six in all, and you’ll eventually build/upgrade each of them, though you do have some control over what goes up first.

On the surface, Bastion plays like your typical action RPG with lots of hack n’ slash combat that doesn’t distinguish itself initially, leaving the unique setting and storytelling to rope you in. It picks up fairly quickly, however, as you begin to find additional weapons, each of which has its own strengths and weaknesses when going into battle.

For instance, the machete offers fast slashes and an option to throw the blade to take down smaller foes in large numbers, but it’s fairly weak so bigger enemies are tougher to handle. The hammer is the direct opposite with slow yet powerful blows. On the ranged front, you’ll have access to rapid fire guns (like dual-wielding pistols) as well as shotguns, long-range rifles and more. On top of that there are tonics that supplement your skills and the ability to upgrade each weapon up to five times with two options per upgrade, creating a lot of different combinations.

While the PS4 version adds Score Attack and No-Sweat Mode, Bastion primarily employs something similar to the skulls in Halo in which enemy attributes can be amplified to increase the challenge. They can be toggled on/off before missions and reward you with increased experience and fragment collection, which serves as in-game currency.

Expect to spend around six hours clearing the game the first time, which includes time spent on the proving grounds — specific challenges available for each weapon — as well as the dreamy “Who Knows Where,” which features 20 waves of challenging combat to test your mettle. This includes the more difficult Stranger’s Dream sequence, which was previously available as downloadable content and serves to provide a little more backstory on Rucks.

Once you’re finished you’ll be granted access to a new game-plus mode, allowing you to carry forward all your accumulated goodies for a second go round.

Although a few tweaks to the controls would’ve been welcomed, Bastion still holds up very well almost four years after its initial release. PlayStation owners that missed it the first time should make time to experience it for themselves.

By HC Green
Tags: Bastion, Spring Fever, SuperGiant Games
This entry was posted on Wednesday, April 8th, 2015 at 10:05 pm and is filed under Herija Green, Video Game Reviews. You can follow any responses to this entry through the RSS 2.0 feed. Both comments and pings are currently closed.