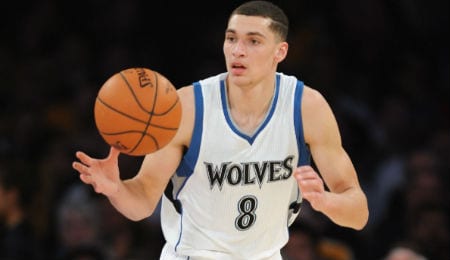 Zach LaVine has been blazing for the Wolves. (Probasketballtalk.nbcsports.com)

We only have two weeks left in the NBA season and just eight teams have clinched playoff berths. Both conferences have heated playoff races for the other half of the spots. The Warriors hit the 60-win mark and won their first division title since the ’70s while the Knicks lost 60 games for the first time in franchise history and the Lakers could be on their way to that feat as well.

Zach LaVine, PG, Minnesota Timberwolves (ESPN: 10.6 per cent; CBS: 33 per cent): We recommended LaVine in late-December and it was a great call as he was jacking up plenty of shots from downtown. He slowed down in January despite excellent FT shooting, and then did a better job on the glass in February. LaVine has been on fire lately, and has been shooting the lights out — especially from deep. With the Timberwolves having so many minutes to give out because of all their injuries (only seven T-Wolves played against the Jazz on Monday, with Kevin Martin only dressing because the league requires a minimum of eight players to be in uniform), LaVine is the must own pick up of the week. Don’t forget — this kid can throw it down (see the video below).

Ish Smith, PG, Philadelphia 76ers (ESPN: 14.6 per cent; CBS: 45 per cent): For a player that has played on eight teams in just four seasons, Smith might have finally found a home in Philadelphia. As a starter for the 76ers, he’s averaging 15 points and seven assists while shooting 47 per cent from downtown. Smith isn’t a flashy pick up, but could be an under the radar pick to help you win your league.

Chase Budinger, SF, Minnesota Timberwolves (ESPN: 3.7 per cent; CBS: 11 per cent): With almost everyone hurt in Minnesota, Budinger has stepped up. He has scored in double figures in eight straight games, and is 11-for-20 from beyond the arc in the last four. If you’re seeking a plug and play scorer and three-point help, look no further as Budinger is your guy.

Ryan Kelly, SF/PF, Los Angeles Lakers (ESPN: 0.6 per cent; CBS: 3 per cent): Kelly may not be worth a pick up in most leagues for this season, but has shown signs of improvement and is a nice sneaky add in dynasty leagues. He has shown he can shoot in the NBA and could have a solid career.

Tiago Splitter, C/PF, San Antonio Spurs (ESPN: 5.0 per cent; CBS: 18 per cent): Splitter is getting back into rhythm now that he’s back in the starting lineup. Over the last nine games, he’s averaged 12 points and has rebounded fairly well. Splitter is a sneaky plug and play the rest of the way.

Joey Dorsey, Houston Rockets (ESPN: unowned; CBS: unowned): This is a deep league special. Dorsey, traded from the Rockets to the Kings in the Tracy McGrady deal at the deadline in 2010, is back in Houston this season, and has seen a recent spike in PT. Dorsey even saw some starts at the four with Terrence Jones out. Dorsey has averaged seven points over the last three games, and he pulled down eight boards Sunday. If you’re desperate for a centre in a very deep league, give him a look.

By McCade Pearson
Tags: Golden State Warriors, Los Angeles Lakers, NBA, New York Knicks
This entry was posted on Sunday, March 29th, 2015 at 6:59 pm and is filed under BASKETBALL, McCade Pearson, The Wire Troll. You can follow any responses to this entry through the RSS 2.0 feed. Both comments and pings are currently closed.