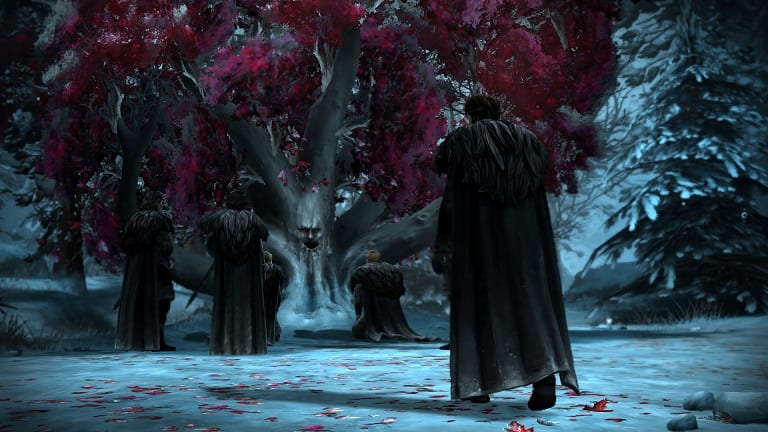 You knelt as boys…

As with the last episode, we start off across the Narrow Sea with Asher, Beskha and Malcolm trying to reach Meereen, where the Second Sons are camped. Their surprise encounter is pretty interesting — both as an action sequence and segue to future conversations (and perhaps alliances?) — and it offers us the first Walking Dead style “pick one to help” situation. It’s a great way to jump start the episode, and it lays some groundwork for potential issues down the road.

More significant than that, however, is how well The Sword in the Darkness salvages Gerard’s role. After last episode it was hard to see what the point of his storyline was, but a visit from his uncle Duncan weaves Gerard right back in as it seems the mysterious North Grove mentioned at the series’ start is actually located north of the Wall. No one’s sure exactly where, but it’s being left to Gerard to forsake his vows and strike out on his own the next time he’s sent ranging.

Duncan isn’t the only new arrival at Castle Black, either, as the man who killed Gerard’s father has been sentenced to live out his days on the Wall. While it does feel more than a little convenient he’d end up there with you — after all, he was backed by the Whitehills and, by extension, the Boltons, so we’re not sure why he’d be punished or by whom — it does offer a chance to gain revenge, which is decidedly rare for the Game of Thrones universe.

It’s worth noting that the segments at the Wall inadvertently show the limitations of choice with the TellTale series. Even though there are dialogue options to the contrary, you literally can’t choose to honour your vows and stay at the Wall. There’s a similar feel to interactions with your father’s killer as well. Add that to how easily the fallout from last episode’s big conflict at Castle Black is brushed aside and Gerard’s tale, while fun, feels very pre-determined.

Mira’s story, on the other hand, seems to be brimming with major decisions with tangible fallout from those choices. Your position of being caught between Cersei, Tywin and Margaery seems to be a true no win situation, and it’s an interesting balancing act trying to stay on their respective good sides while still attempting to help your family’s tenuous position. More than any other arc, Mira’s political machinations feel grounded in the Game of Thrones style of storytelling.

Speaking of House Forrester’s fragile state, by far the weakest elements of The Sword in the Darkness take place when controlling Rodrik. Here we’re introduced to Gryff Whitehill, the fourth-born son of Lord Whitehill, who continues the humiliation and mistreatment of the family and the people of Ironrath. At this point we’ve received the message that the Whitehills are scum loud and clear, and Gryff comes off as nothing more than a placeholder for his father in doling out indignities.

There is one major reveal on the Ironrath front that keeps that storyline from being completely stagnant, but still, we’d like to see things start progressing a little more substantially with Rodrik.

After stumbling a bit in Episode 2, The Sword in the Darkness gets things headed in the right direction with at least three of the four storylines. With a couple good action sequences and meatier choices on offer, TellTale’s Game of Thrones is gaining momentum.

By HC Green
Tags: Asher, Game of Thrones, House Forrester, Iron from Ice, King's Landing, Mira
This entry was posted on Wednesday, March 25th, 2015 at 5:24 pm and is filed under Herija Green, Video Game Reviews. You can follow any responses to this entry through the RSS 2.0 feed. Both comments and pings are currently closed.