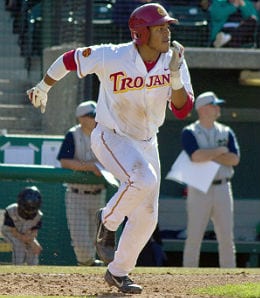 The University of Southern California Trojans can apparently beat any college team in the country — except UC Santa Barbara and UC Irvine.

On Tuesday, the Trojans were whipped soundly 6-2 by UC Irvine to drop to 0-2 against them and UC Santa Barbara, while going 15-0 against everyone else.

Next up, conference play begins as the Trojans face Washington State for a three game series this weekend.

The Trojans, who had risen to ninth in the rankings, were burned for four first inning runs, and never recovered.

It was unclear how good USC would be this season given the loss of its two best hitters from 2014 — Jake Hernandez (signed as an undrafted free agent by the Yankees) and Kevin Swick (22nd round pick by the White Sox).

It was up to some returnees to make up for that lost offense. Junior outfielder Timmy Robinson, who paced the team with 30 RBI last year, was one of the keys to the Trojans having enough hitting.

After scoring the game-winning run against TCU on the weekend (see video below), Robinson got the Trojans on the board Tuesday with a two-out RBI single in the third inning. It was his team-leading 15th RBI of the season, and he’s now batting .286 with one homer, a .381 SLG and six walks against 11 strikeouts. Robinson has only been caught stealing once in nine tries.

He played in the Cape Cod League last summer, but didn’t see much action because of injury. A 31st round pick by the Twins in 2012, Robinson scored 24 runs with one homer in 199 at-bats last year. He was caught stealing four times in 11 tries while fanning 40 times, so there was definitely room for improvement.

Robinson was nearly a full-time starter as a sophomore and was considered one of the top newcomers in the Pac-12 when he arrived in 2013 — a prognostication he’s beginning to prove accurate.

Another player the Trojans were counting on for more offense this season is junior third baseman Blake Lacey. And has he ever delivered. One of five regulars batting .323 or better, Lacey enjoyed a tremendous freshman season in 2013, but suffered a bit of a sophomore slump last season as he played less and managed just 39 hits, 15 runs and 19 RBI in 139 at-bats. He only attempted five steals, and while he did show improved patience with 11 walks, hit BA dipped to .281.

This year has been a completely different story for Lacey so far. He’s not hitting for much power, but is 21-for-65 with nine runs, one double and four walks. Lacey has already matched last year’s total with five attempted stolen bases.

He played in the Cape Cod League last summer, but only managed a .214 mark in 34 games. Lacey did show some pop and productivity, though, with eight two-baggers and nine RBI. A shortstop in high school, he was considered a superb defender, drawing comparisons to Adam Everett.

Now it’s your turn. Which Trojan hitters have you been tracking this season?

By RotoRob
Tags: University of Southern California Trojans
This entry was posted on Wednesday, March 11th, 2015 at 9:55 pm and is filed under BASEBALL, College sports, RotoRob, Scouting Report. You can follow any responses to this entry through the RSS 2.0 feed. Both comments and pings are currently closed.