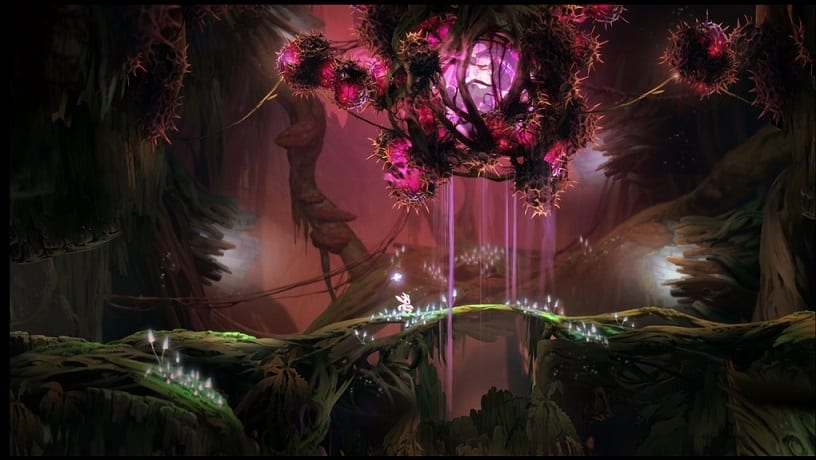 Graphically, Ori and the Blind Forest is amazing.

It’s not hard to make a game look compelling in a two-minute trailer, but there was something about the one we saw for Moon Studios’ Ori and the Blind Forest that hooked us. It wasn’t clear what the game was about or how it would play, but it piqued our interest like few others have nonetheless. Now that the debut collaboration between Moon and Microsoft Game Studios is here it’s time to find out if our excitement was justified (Spoiler Alert: It was.).

As Ori, a guardian spirit, you’re initially very weak when setting out on your own, with jumping as your lone skill. You quickly meet Sein, however, a blue orb that serves as your guide and protector thanks to its ability to fire bolts of energy at your enemies. Those core attributes will be developed and expanded as you progress, both by locating the remains of other spirits and by employing the game’s skill tree where you can buy new abilities (or upgrade existing ones) via ability orbs.

Most of the time it works brilliantly, creating a rush as you launch yourself off a series of enemies and projectiles to ascend higher and higher before ultimately gliding to safety. There are moments, however, when the game seems to betray you, typically when the stomp ability is involved. It’s supposed to be executed by simply pushing down on the analog stick, but dozens of times Ori would land harmlessly instead and expose us to quick deaths.

Despite those occasional frustrations, most of the time things handle marvelously. And once Ori has a full complement of skills (triple jump, grappling, breathing underwater, etc.) it can be a blast to simply race through the beautiful world in a series of deft, practiced movements.

Dark and foreboding. Beautiful and vibrant. Ori and the Blind Forest is all of those things and more (sometimes simultaneously) thanks to an incredible hand-painted style that employs unique art for every area and creature throughout the vast forest of Nibel.

Moon Studios has created a world that feels old and diverse as you travel to the different sections while still maintaining continuity as each piece still connects with every other piece. It’s impossible to oversell how fantastic the game looks.

Although the visuals will receive the yeoman’s share of the praise, and deservedly so, the soundtrack is excellent as well. The way it builds for intense moments and shrinks away during quieter times — allowing you to reflect on what happened — is perfect. There’s no spoken dialogue, but the otherworldly language of the “narrator,” as well as Sein, fits — though it does create a Twilight Princess flashback to Midna.

During a violent storm, Ori falls from his home and is rescued and raised by a forest dwelling creature named Naru. As Ori grows, the forest falls into decay, and Naru eventually takes ill. To the game’s unending credit, this proves to be one of the more emotional moments in gaming we can remember, creating the type of reaction so many big budget titles try (but fail) to manufacture — and it’s done here in a matter of minutes.

That prologue sets the stage for Ori to venture out into Nibel in an effort to heal the sickness that has infected it. At the heart of the corruption is Kuro, a massive owl that destroyed the light and now hunts Ori to prevent him from completing his quest. There’s more depth and intrigue to the story than you might expect, but we’ll stick with the broad strokes lest we ruin any of the surprises.

As previously mentioned, Ori and the Blind Forest uses the Metroidvania style of exploration, which encourages backtracking and revisiting areas to reach previously inaccessible sections. It also features some minor RPG elements courtesy of the skill tree as you’re free to focus your growth as you see fit since — though there are abilities you can only acquire from orbs — all the skills you need to proceed along the main path will be discovered through natural progression.

Platforming takes centre stage, and the pace at which the game introduces new skills and then starts to blend them together is excellent. There are a few moments when something significantly different just sort of appears — gravity bending in the Forlorn Ruins, for instance — that can be a little confusing, but for the most part things unravel smoothly before being reshuffled to test your ability to string together Ori’s various skills.

Combat and light puzzle solving are also present, though you could categorize the latter as an extension of the platforming since obstacles are overcome by moving objects or performing a series of actions. As for fighting, it’s probably the game’s weakest element. It isn’t bad per se, but with all the flashing effects of your energy strikes combined with enemy projectiles it’s easy to lose track of where you are in relation to threats. This is particularly true when taking on more than one foe.

Stunning presentation, wonderful level design, intense platforming and a surprisingly touching story are just some of the highlights of Ori and the Blind Forest. It’s a wonderful game that people should go out of their way to experience.

By HC Green
Tags: Microsoft Game Studios, Moon Studios, Ori and the Blind Forest
This entry was posted on Wednesday, March 11th, 2015 at 7:12 pm and is filed under Herija Green, Video Game Reviews. You can follow any responses to this entry through the RSS 2.0 feed. Both comments and pings are currently closed.