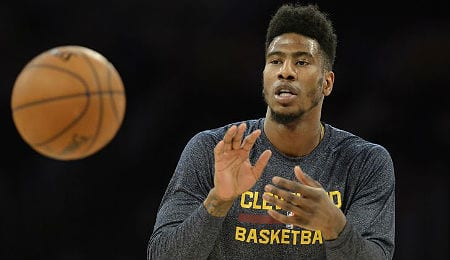 Welcome back to another week of Fantasy basketball action. This week, Derrick Rose went under the knife and will miss at least four weeks; both LeBron James and Kyrie Irving were MIA for the Cavs on Friday as the King got some rest and Irving’s shoulder is barking, requiring an MRI; and Rajon Rondo says everything is back to normal after his blow up with Coach Rick Carlisle and the subsequent one-game suspension.

Iman Shumpert, SG, Cleveland Cavaliers (ESPN: 7.3 per cent; CBS: 20 per cent): Shumpert, who dislocated his shoulder in mid-December and was then dealt to the Cavs at the beginning of January, finally returned to action about six weeks ago, and lately has been getting tons of burn off the Cleveland bench. With Irving currently out, those minutes are only getting bigger as on Friday, Shumpert played at least 30 minutes for the fourth straight game, responding with a double-double and two blocks. Shumpert had been struggling to score lately, so don’t overreact to this game, but clearly his conditioning is no longer a factor as he looked fantastic at both ends of the court Friday — especially on offense when he split the D for a massive slam (see video below).

Matthew Dellavedova, SG, Cleveland Cavaliers (ESPN: 0.2 per cent; CBS: 1 per cent): Another guard that’s benefiting from Irving’s absence is Dellavedova, tabbed to replace him as the starting PG Friday. When Irving was out in late-March, it was Dellavedova we recommended at the time, and sure enough he saw bigger minutes in April, although he struggled with his shot. Keep a close eye on Irving’s MRI results, because Dellavedova — who also double-doubled on Friday with five assists and two treys — could become a nice short-term option. Dellavedova scored seven points in the first quarter, but managed just seven for the rest of the game. Still, there was a reason this youngster was picked for the Rising Stars Challenge at the All-Star Game earlier this month.

Jae Crowder, SF, Boston Celtics (ESPN: 2.7 per cent; CBS: 22 per cent): About six weeks ago, we recommended Crowder, yet he’s actually more widely available now despite the fact he keeps getting better — at least month by month. But in reality, he really slid for about 10 games after somehow stealing the starting SF job shortly after arriving in Boston in the Rondo deal in mid-December. Now that Crowder is back to being a bench player, he’s picked it up. Over the last four games, he’s played at least 28 MPG, scoring at least 12 points, nailing 12 treys (11 in the last three), pulling down at least six boards and recording four steals (all over the last three). Yes, Crowder is undersized at the four — and not exactly big for a SF, either — but now that he’s getting his chance, he seems to be seizing it, so give him a long look in all formats.

Luis Scola, PF, Indiana Pacers (ESPN: 3.3 per cent; CBS: 23 per cent): We slotted Scola 36th in our Power Forward Rankings but he’s only played at about a top 65 level so far even though he’s getting more chances to start, more PT and more touches. Last month, his consecutive game streak ended just a couple of games past the 225 mark as the Pacers decided that periodic rest was more important than a streak. Certainly, Scola has been very productive in limited minutes, making him a nice option in leagues of 14 or more teams. Over the last five games, he’s only played between 18 and 23 minutes, yet has at least seven points and five boards in every game as he continues to flirt with double-doubles in limited PT. This veteran is capable of a big game every now and then, and if David West gets hurt (which isn’t a rare thing), Scola’s value will soar.

Bernard James, Dallas Mavericks (ESPN: 0.1 per cent ; CBS: unowned): Veteran James, who earlier this season was relegated to playing in China, suddenly finds himself about to be signed by the Mavericks for the remainder of the season once his second 10-day contract runs out shortly. With Tyson Chandler (hip) currently out, James flashed a little something-something on Wednesday, pulling down 11 boards with seven points, three assists and two blocks in 27 minutes. Chandler practiced Friday, so he may be back in action Saturday, which would render James useless again. However, James has shown he’s worth consideration when he gets his chance, so if it looks like Chandler won’t play, consider James a nice plug and play option.

Reggie Evans, C/PF, Sacramento Kings (ESPN: 0.2 per cent; CBS: 1 per cent): Evans, slotted 41st in our Power Forward Rankings, has barely been a top 120 player at the position so far as he’s missed time (knee and hip), has made just a handful of starts and even his rebounding is down. But right now, the veteran is getting PT and as long as DeMarcus Cousins (ankle) is out, that’s sure to continue. In both game since returning from his latest knee woe, Evans has pulled down 11 boards. On Friday, he had 11 of the 21 rebounds the King bench contributed. Evans does almost nothing else, so this is definitely a one-trick pony, but if you need a push to win rebounding in your H2H league, he’s a solid choice.

By RotoRob
Tags: Derrick Rose, fantasy basketball, LeBron James
This entry was posted on Saturday, February 28th, 2015 at 2:35 pm and is filed under BASKETBALL, RotoRob, The Wire Troll. You can follow any responses to this entry through the RSS 2.0 feed. Both comments and pings are currently closed.