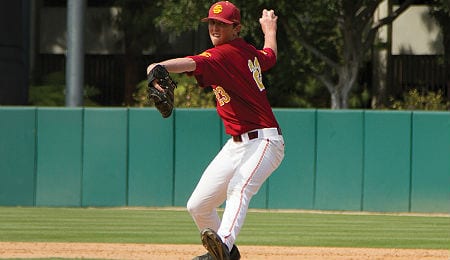 It has now been a decade since the University of Southern California Trojans have made the NCAA Baseball Tournament. However, with the team winning its first seven games at home and then another two on the road to fuel a 9-0 start, there’s excitement building early on this season for the Trojans.

Sure, it’s hard to gauge how good this team is until Conference play begins, but if the Trojans keep winning, sooner or later, the NCBWA will begin to take note and elevate this squad into the top 30.

Tuesday, in his first start of the season, junior righty Brooks Kriske held Fresno State to three hits and a run over five innings. He fanned 10, but walked four in a no-decision. During his first two seasons at USC, Kriske has been used mostly out of the bullpen, making just five starts combined. He was easier to hit last year, yet went undefeated as he lowered his ERA substantially. Coming out of high school (see video below), Kriske was considered someone that would throw strikes, but he needed work on his secondary pitches.

USC wound up winning the game Tuesday 3-2 in 10 innings as Fresno State (3-5) lefty Ricky Thomas again struggled, giving up three hits and three walks in just 2 1/3 IP before getting the hook. The freshman actually managed to lower his ERA with this outing, but it’s been a rough start to his college career.

For the Bulldogs, Austin Guibor continues to rake, going 2-for-4 with an RBI. The sophomore outfielder established himself as a solid leadoff option last year, and is doing the same in 2015, batting .471 with a .761 slugging percentage and more walks than strikeouts. Guibor is someone to pay attention to in the 2016 MLB Draft.

For Fresno State, Tuesday marked its fifth straight loss after a nice start to the season.

Senior catcher Garrett Stubbs is the team’s biggest bat, raking at a .500 rate through nine games with one double, six RBI and four walks. He’s swiped seven bags on eight tries already. Stubbs was a full-time starter as a Junior, but has taken his game to a new level early on in 2015. His relatively small stature (5’10”, 165) will likely hold him back from excelling at the next level — at least as a catcher.

Now it’s your turn. Let us know in the comments below whether you think the Trojans can make it to the tourney this year.

By RotoRob
Tags: University of Southern California Trojans
This entry was posted on Friday, February 27th, 2015 at 12:30 pm and is filed under BASEBALL, College sports, RotoRob. You can follow any responses to this entry through the RSS 2.0 feed. Both comments and pings are currently closed.