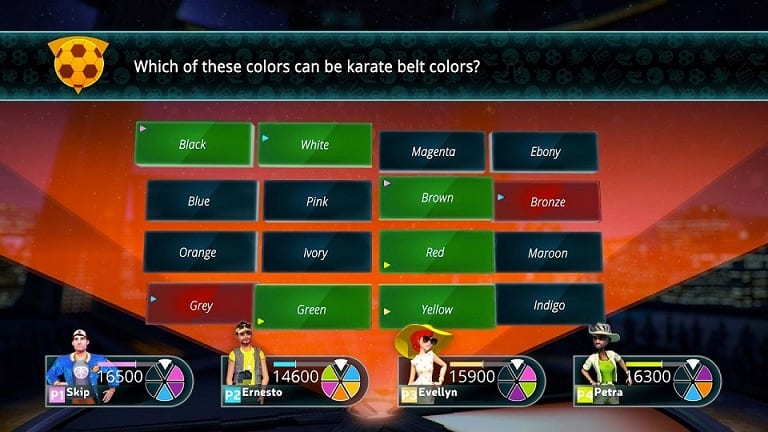 Gotta catch ’em all! The wedges, I mean…

Not much can top a tried-and-true classic. The Trivial Pursuit franchise dates back to 1979, when it was just a mere board game. As of 2015, the game has undergone numerous incarnations, ranging from Star Wars themes to an adaption for the ill-fated Sega CD. Trivial Pursuit Live, the latest version for PlayStation Network and Xbox Live Arcade, strays a bit from the original formula, so let’s have a look.

For those who may not have played Trivial Pursuit before, the goal is to correctly answer as many questions as possible. After answering a certain number of questions correctly, the player will be awarded a wedge. The first person to fill their circle with six wedges wins! Simple as that.

The first difference players may notice is the length. While the board game was infamous for its hefty duration, Live players may choose between either a three- or five-round game, neither of which lasts particularly long.

Live allows up to four players or teams to join a game, with any number of AI characters available. If you don’t have enough controllers, fear not! A setting at the beginning makes allowances for a shared controller. Although passing around a single controller can be a little awkward, it’s certainly better than not getting to play at all.

At its core, Trivial Pursuit Live is the game we all know and love, but some aspects may surprise you. Each round takes a different question form (Quickstarter, Switchagories, Close Call, Close Call Blitz, Grab Bag, Grab Bag Blitz) which is randomly selected. The last round, however, is always Final Round. This format lends itself much better to the video game medium than a more traditional approach.

All round types offer lots of fun, but Final Round feels like an attempt to shorten the game, as wedges are deliberately awarded quickly. This Blitz version have many similarities to the regular types, but it requires speed, which makes things much more exciting.

Graphically speaking, Live could use some extra love. The entire game is plagued by low frame rates and stuttering. The character avatars are especially bad, with their awkward victory poses and lifeless eyes. Luckily, you don’t need good graphics to make a good trivia game.

The soundtrack mostly consists of various cheering noises from the “live” studio audience, and a friendly announcer narrates all action. This voice actor does a nice job emulating the TV game show style.

One of the best parts of Live is the region select. In addition to selecting the desired language, Live tailors its questions to best fit people from those countries. For example, Brits won’t be stuck answering American history questions and vice versa.

Trivial Pursuit Live! sports a hefty amount of questions. We never encountered repeats on our playthrough. As for the questions themselves, they range from ridiculously easy to real head scratchers. Although the variety in difficulty is nice, the easy questions can get a little boring.

The only feature conspicuously lacking in this game is online capability. Although a leaderboard is available to view high scores, social games like this cry out for an online multiplayer experience.

Trivial Pursuit Live! takes a classic game and polishes it for the next generation. Although the graphics may not be up to modern standards, the gameplay is as solid as ever with the new round types serving as welcome additions. The only thing holding Live back from a higher score is the lack of online multiplayer, but the flexibility of the local multiplayer’s control options certainly helps. For a game filled with fun for all ages, its price tag is well worth it.

By Matthew Striplen
Tags: Star Wars, Trivial Pursuit
This entry was posted on Saturday, February 28th, 2015 at 6:25 pm and is filed under Matthew Striplen, Video Game Reviews. You can follow any responses to this entry through the RSS 2.0 feed. Both comments and pings are currently closed.