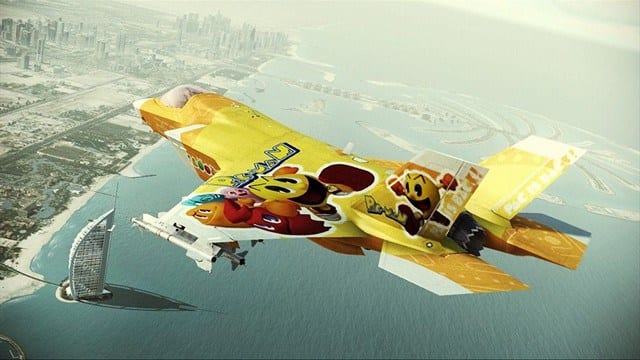 We know what we’re buying if we win the lottery.

First off: A little disclosure first. We never played the original version of Ace Combat: Assault Horizon or any other entry in this series. We have looked into the changes for the game, but we feel without playing the original, we cannot give a fair critique of the changes and will judge Ace Combat Assault Horizon Legacy+ solely on its current merits. And based on these merits, it succeeds in providing some very fun dogfights.

Our only real complaint is not even with the game, but rather that the 3DS’ nub is not as precise as a real analog stick and can make controlling your ship feel like you’re fighting against it. It doesn’t ruin the game by any means, just gets in the way every now and then.

As with most 3DS games, it’s natural to not expect the visuals to dazzle, especially for a game without any stylized graphics. And here, you get exactly what you expect. Plane models don’t have much detail, environments provide nothing exciting or interesting and explosion effects are obviously just 2D effects crammed in a 3D space. There is nothing really ugly about this game, but it sits just slightly above average.

Music falls somewhere between hard rock and heavy metal, which is very fitting for a game based around blowing up planes and anti-aircraft weaponry. It makes these dogfights even more exciting while complementing the gameplay very well. Explosions and machine gun fire do not sound spectacular, but they get the job done while the game does a good job of making you feel like your plane is moving fast.

The structure to AC:AHL+ works very well for a portable game. Missions are bite sized and excellently tailored for gaming on the go while there are both challenge and survival modes, which provide incentive to replay and give the game some meat.

Meanwhile, the missions themselves do a good job of keeping things fresh, whether by mixing the types of enemies you face or offering twists to the core gameplay. For instance, the enemy could turn on their transmission jamming, ruining any efforts to lock on your missiles or easily spot enemy planes.

There are also a decent amount of unlockables, including other planes and extra weapons. These are not necessarily about superiority over the others, but different planes and weapons work better against different enemies. Therefore each has its own missions in which it excels at. This is a nice approach to spending your funds, as it’s about giving options rather than progression, which offers the gameplay some extra depth.

Ace Combat: Assault Horizon Legacy+ succeeds as both a flight combat game and a portable title. The gameplay is plenty addicting while there is a good amount of content to keep you coming back. If you want some nice action on your 3DS, then it’s well worth your time and money.

By Casey Curran
Tags: Ace Combat: Assault Horizon
This entry was posted on Thursday, February 26th, 2015 at 3:48 pm and is filed under Casey Curran, Video Game Reviews. You can follow any responses to this entry through the RSS 2.0 feed. Both comments and pings are currently closed.