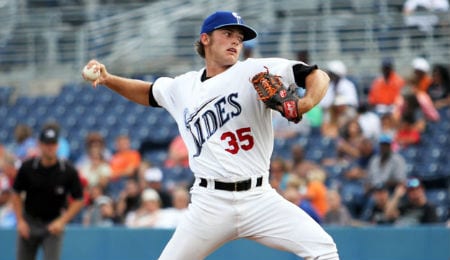 Tyler Wilson broke through as the 2014 Orioles Minor League Pitcher of the Year. (Les Treagus/Norfolk Tides)

On Tuesday, we examined the Baltimore Orioles’ starting pitching options for 2015.

One pitcher we didn’t mention was unheralded prospect Tyler Wilson, Baltimore’s 10th round pick from 2011. The 25-year-old righty may not have the upside of Kevin Gausman, Dylan Bundy or Hunter Harvey, but after a 2014 season in which he was among the minor league leaders with a combined 14 wins between Double-A and Triple-A, Wilson has definitely put himself in consideration as a future major leaguer.

“There’s probably not a plus-plus pitch in a guy like Wilson, but when you put the repertoire together, you win baseball games. He locates his fastball. He’s got a good delivery. He fields his position. He holds runners. He’s athletic. He’s smart,” Showalter said.

Small wonder the Orioles added Wilson to the 40-man roster this season to avoid losing him in the Rule 5 draft. The former Virginia Cavalier has been a consistent winner in the minor leagues, managing to compile a sub-4.00 ERA through his first four professional seasons.

Wilson is not someone that will blow hitters away or light up the radar gun, but he always seems to rack up the Ws wherever he goes (his 25 career wins ranks third all-time at Virginia). The fact that his command did not really suffer in the move from Double-A to Triple-A was a great sign.

Wilson racked up 10 wins and one Eastern League Pitcher of the Week award during his time at Double-A last year before moving to Triple-A just after the halfway mark of the season (check out his first Triple-A win in the video below).

With the Norfork Tides, he didn’t pitch quite as deep into each start, and he may have benefited slightly from a somewhat low .280 BABIP — although it was nothing that would suggest a drastic shift in his bottom line numbers.

Wilson, penned for a $20,000 signing bonus, isn’t the kind of hurler that pops up on Top 10 prospect lists, hence his arrival at Triple-A in relative obscurity. But with a career WHIP of 1.16, this dude knows how to limit baserunners — and that will spell success at any level. Wilson did have some issues with the long ball, surrendering 13 in 16 starts in his first try at Double-A in 2013. But he cut that to just 10 dingers allowed in 16 Double-A starts last year before the promotion. At Triple-A, Wilson’s homer rate was up only slightly.

At this stage, Wilson probably ranks below only Ubaldo Jimenez among starters that aren’t projected to break camp in the B-More rotation, so there’s a very good chance he’ll make his MLB debut at some point this year.

Long-term, Wilson may wind up in relief, but the fact that he’s made it this far as a starter is a good sign.

Now it’s your turn. Let us know in the comments below what kind of future you envision for Wilson.

By RotoRob
Tags: Baltimore Orioles, Tyler Wilson
This entry was posted on Wednesday, February 25th, 2015 at 1:40 pm and is filed under BASEBALL, Prospects, RotoRob, Scouting Report. You can follow any responses to this entry through the RSS 2.0 feed. Both comments and pings are currently closed.