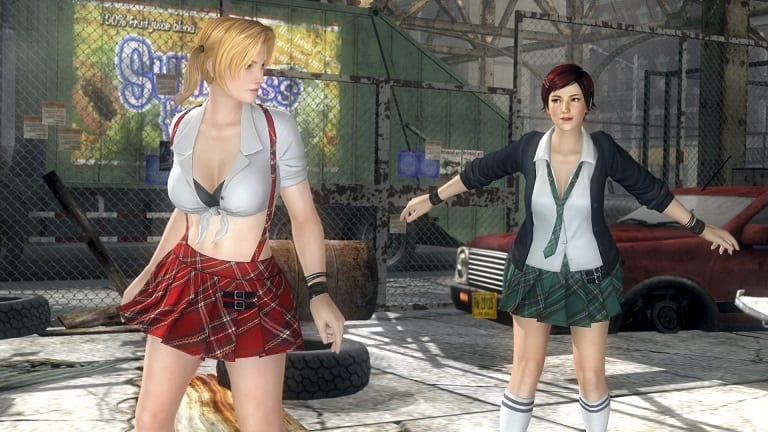 Private school… Worth. Every. Penny.

If it seems like we’ve written about Dead or Alive 5 before, well, that’s because we have… on more than one occasion. With two consoles releases (three if you count Arcade) and a handheld version already available, Tecmo-Koei has decided to bring its brawler to the new generation with Dead or Alive 5 Last Round for the Xbox One and PlayStation 4. So put on your bunny suit and most sensible pair of stilettos, it’s fighting time.

Rather than rehash the game’s triangle fighting system and modes, all of which can be read about in detail in our previous coverage, we’ll focus on what’s been added (characters, locations, outfits) and what’s been upgraded (graphics).

A deep selection of fighters is always a welcome sight, and Last Round has a whopping 34 characters to choose from. This includes the Ultimate DLC lineup (Marie Rose, Nyotengu and Phase-4) along with two newcomers in Raidou, the boss from the original Dead or Alive game, and Honoka. None of these additions are likely to be fan favourites, at least for their fighting styles, particularly given the recycled feel of Phase-4 (another clone of Kasumi) and Honoka.

During our time with the online component we rarely bumped into anyone playing the new blood with the exception of Nyotengu, who found her way into a match now and then. Speaking of which, the game’s online performance was all over the map, ranging from very smooth to nearly unplayable. For whatever reason it seemed to fare better during the game’s “throw downs” than actively selecting the online option and finding a lobby.

In addition to new fighters, Tecmo-Koei has also added a couple of new stages, bringing the total on that front to 31, and loads of new outfits to unlock. The new costumes are sure to get a rise out of long-time fans with little left to the imagination in many of them — some were even designed by fans themselves — and new options to adjust fighters’ hair style and even underwear. There are silly costumes as well, such as Tecmo Bowl uniforms, and it’s all done in the name of fan service.

Visually, Last Round doesn’t do a whole lot to separate from its last-gen predecessors. Of course, it was one of the better looking games on those systems, so that’s a non-issue. The move to current consoles does bring an uptick in performance as the game now outputs 1080p at 60 frames per second, making the already fluid animations buttery smooth.

Our other issue is the continued presence of paid DLC. While it’s offered at a somewhat discounted price (US$39.99), this is still the third full-fledged release of the game, so to ask fans that made the financial commitment to shell out more seems at odds with the purpose of this version — to be fair, though, it should be pointed out that previously purchased DLC (and game progress) can be brought forward so you needn’t re-purchase content.

At its core, Dead or Alive 5 Last Round is still the same enjoyable fighter it’s always been with an expansive roster, lots of modes and tons of unlockable content. Hardcore fans and those seeking a fighter on their new console should take note, assuming they patch the launch issues.

By HC Green
Tags: Dead or Alive 5
This entry was posted on Tuesday, February 24th, 2015 at 6:39 pm and is filed under Herija Green, Video Game Reviews. You can follow any responses to this entry through the RSS 2.0 feed. Both comments and pings are currently closed.