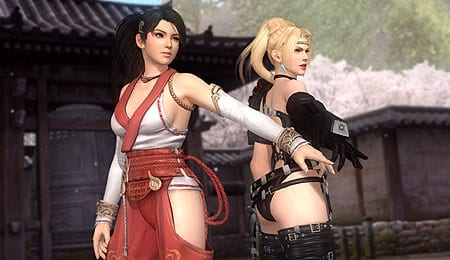 That qualifies as conservative attire in DoA5U.

First released a little more than a year ago, Dead or Alive 5 has already seen one enhanced version hit store shelves (Plus for the PS Vita). Now, Team Ninja is back again with Dead or Alive 5 Ultimate on the Xbox 360 and PlayStation 3. The latest version adds new characters, costumes and other refinements, but is it worth investing in?

Assuming you did not play the previous release, there is a significant learning curve associated with Dead or Alive 5 Ultimate. That being said, the game is structured so that even novice players can pull off powerful combos and generally whip the computer on lower difficulty settings. You need only use the analog stick (or d-pad) and face buttons to pull off any attack in the game — the bumpers and right trigger serve as alternate input methods for multiple button presses. For instance, hitting the left bumper is the same as pressing punch and kick simultaneously.

Beyond the basics, however, lies a deeper, timing-based layer to give the fights some meat. Blocks and counters, referred to as holds, become an essential part of combat once you start mixing it up with capable human opponents or crank up the difficulty. It’s no easy task considering you not only have to time your counter precisely but also correctly predict where the blow is being aimed (high, middle, low) for your efforts to be successful.

There’s a “rock-paper-scissors” priority method (known as the triangle system) operating beneath the surface that makes matches between skilled players a battle of wits as well as reflexes. Here, strikes cancel throws, throws defeat holds, and holds counter strikes. It really is a lot to digest, and even after playing through a story mode that introduces and explains many of the core concepts, you can still expect to take some serious lumps online.

A couple of changes have been made from the original, starting with a switch to tag throws. Previously, pressing the usual throw button would cause tandem actions to be triggered automatically. Now you have to press forward twice along with the tag button. It’s not as precise, and I often ended up just tagging in my partner without executing the move. A new power launcher attack has been added as well, which opens up some juggling options.

Visually, Dead or Alive 5 Ultimate takes a backseat to nobody. Characters are beautifully rendered and look absolutely fantastic in motion. Watching moves flow into one another and then be abruptly countered mid-steam is a seamless experience that allows fights to feel fresh. Interactive stages have long been a staple of the series, and those are back in all their glory. In fact, the envelope has been pushed even further as the multi-layer environments house more over-the-top action than ever.

In typical fashion, there is no shortage of eye candy aimed squarely at the loins of male gamers, either, courtesy of a roster overflowing with buxom ladies. Cut scenes frequently linger on jiggling breasts or other assets, and there’s no shortage of suggestive attire to unlock with many of the female fighters boasting more than a dozen costumes. Unfortunately, some of those unlocks remain in the form of paid DLC, which seems shaky given this is already an expanded edition.

Characters are fully voiced during the game’s story mode, and while the dialogue can be painfully cliché in any number of departments, the voices themselves are fine. Blows are delivered with impact, and the satisfying smacks reinforce that nicely. The soundtrack is standard, up-tempo fare, which is to say eminently passable and instantaneously forgettable.

Most of the actual game modes in Dead or Alive 5 Ultimate were seen in the original release. This includes an identical story mode and a returning trio of secondary offerings with arcade, time attack and survival (which now features item drops after defeating a fighter). For more in-depth thoughts on those, along with the fights themselves, please check out our full review of DoA5.

What’s new is an expanded, and quite exhaustive, training mode that shames the tutorial found in last year’s version. There’s also a combo challenge feature for each of the included fighters that I’m not sure I could finish if I spent an hour playing it each day for the rest of 2013. Rounding out the new modes is Team Battle, which plays out like a massive elimination match in which up to seven fighters per side do battle with the rosters depleting until one team has had every member knocked out.

Perhaps the biggest addition, though, is the inclusion of five new fighters. Ninja Gaiden vets Mojimi and Rachel, Virtua Fighter’s Jacky, and DoA returnees Ein and Leon comprise the newcomers. The group is a mixed bag with some feeling unique when compared to the existing roster while at least one of the others feels almost like a re-skinned version of another fighter. Alpha-152 is also immediately playable this time around as opposed to being an unlock.

Beyond that, Dead or Alive 5 Ultimate features a number of tweaks and under-the-hood adjustments, such as improving the net code and enhancing tag bouts. I played a lot of multiplayer fights, and with few exceptions it held up quite well — another nice addition is the ability to simulate the online input lag into offline fights, which does help with the timing.

There is no doubt Dead or Alive 5 Ultimate is a superior version of the game… but, of course, it is still the same game. Thus, deciding whether or not to drop another US$40 for some new characters and more stable online becomes a matter of how much more time you want to spend with it. If you didn’t play it last year and are at all interested, this is a good pick up. If you already had your fill, there’s nothing here that’s likely to change your outlook.

By Herija Green
Tags: Dead or Alive 5
This entry was posted on Thursday, September 19th, 2013 at 12:41 pm and is filed under Herija Green, Video Game Reviews. You can follow any responses to this entry through the RSS 2.0 feed. Both comments and pings are currently closed.