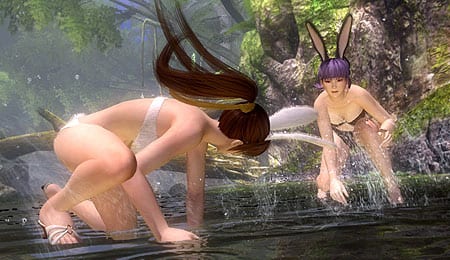 When my old roommate and I bought our Xbox, the (mandatory) bundle came with three games of our choosing. One, of course, was Halo, while the others were Max Payne and Dead or Alive 3. I always enjoyed Team Ninja’s titillating brawler, so even though my interest in fighting games has waned over the years I was definitely ready to check out its recently released Dead or Alive 5. Is this series alive and well? Or is this latest installment dead on arrival? Read on.

It would be disingenuous and inaccurate to suggest there isn’t a significant learning curve associated with Dead or Alive 5. However, the game is structured so that even novice players can pull off powerful combos and generally whip the computer on lower difficulty settings from the get go. You need only use the analog stick (or d-pad) and face buttons to pull off any attack in the game; the bumpers and right trigger serve as alternate input methods for multiple button presses — for instance, hitting the left bumper is the same as pressing punch and kick simultaneously.

Beyond the basics, however, lies a deeper, timing-based layer to give the fights some meat. Blocks and counters, referred to as holds, become an essential part of combat once you start mixing it up with capable human opponents or crank up the difficulty. It’s no easy task considering you not only have to time your counter precisely but also ascertain where the blow is being aimed (high, middle, low) for your efforts to be successful.

There’s a “rock-paper-scissors” priority method (known as the triangle system) operating beneath the surface that makes matches between skilled players a battle of wits as well as reflexes. Here strikes cancel throws, throws defeat holds, and holds counter strikes. It really is a lot to digest, and even after playing through a story mode that introduces and explains many of the core concepts you can still expect to take some serious lumps online.

Visually, Dead or Alive 5 takes a backseat to nobody. Characters are beautifully rendered and look absolutely fantastic in motion. Watching moves flow into one another and then be abruptly countered in mid-steam is a seamless experience that allows fight after fight to feel fresh. Interactive stages have long been a staple of the series, and those are back in all their glory. In fact, the envelope has been pushed even further as the multi-layer environments house more over-the-top action than ever.

In typical fashion, there is no shortage of eye candy aimed squarely at the loins of male gamers, courtesy of a roster overflowing with buxom ladies. Cut scenes frequently linger on jiggling breasts or other assets, and there’s plenty of suggestive attire to unlock.

Characters are fully voiced during the game’s story mode, and while the dialogue can be painfully cliché in any number of departments, the voices themselves are fine. Blows are delivered with impact, and the satisfying smacks reinforce that nicely. The soundtrack is standard, up-tempo fare, which is to say eminently passable and instantaneously forgettable.

I’m not exactly sure when it was decided that fighting games needed a campaign, but after playing through Dead or Alive 5’s disjointed soap opera of a storyline I’d like to have a word with them. So many times cut scenes opened with “a few days later” that I ended up with almost no idea what was going on as I bounced all over a timeline shuffling between various fighters. About the best I can do to sum things up is that there’s another tournament, which is actually a pseudo front for some nefarious plan of the mysterious MIST that involves cloning and/or cyborgs.

As nonsensical as the story elements are — and to be fair, there are only so many different ways you can get to, “Hey, let’s spar,” — the campaign does hold value in that it helps introduce various aspects of the game by adding a challenge to each of the mode’s one-round fights. They start extremely simple, asking you to land a set number of kicks or throws, and get more complex as you advance. You don’t need to fulfill them to advance, and if you just concentrate on winning fights and skip the cut scenes you should complete the entire thing in under an hour.

In addition to the campaign, there are a number of other offline modes to sink your time into. There’s a traditional arcade mode, where you fight your way through a portion of the roster, a time attack that challenges you to win as quickly as possible, and survival where fighters pour into the ring one after the other with only a finite amount of your health regenerating after each win. Each mode has multiple difficulty settings to tackle and only the best will be able to persevere on the higher ones.

Completing challenges in the campaign, finishing runs through the other modes and winning fights will unlock additional outfits and titles. It’s not the greatest carrot for the hours needed to amass all the various goodies, but at least it’s something.

Of course, the real long-term appeal of fighting games is competing against other people, and that’s where Dead or Alive 5 is at its best. Outside of a few emerging exploits, any strategy you run into can be countered by outthinking and outmaneuvering your opponent. And DoA 5 even offers an incredibly in-depth training area where you can work on pulling off the fighters’ expansive move sets along with the option of detailed feedback from the game. If you’re truly invested in becoming proficient, the game is designed to help you get there.

While some will be able to take advantage of local bouts, the game does feature a well designed online mode. Bouts are split into three different types of matches (ranked, simple and lobby) and can range from one-round contests all the way up to best of nine. You’ll run into the occasional bad connection, but for the most part the game runs smoothly, which is critical for the timing-based counters.

A deep roster of fighters, tons of moves and intense matches that are accessible to both the hardcore and casual sects alike make Dead or Alive 5 a strong entry in the series. If you’ve got an itch to whoop ass and look good doing it, this will scratch it for you.

By Herija Green
This entry was posted on Tuesday, October 2nd, 2012 at 11:02 am and is filed under Herija Green, Video Game Reviews. You can follow any responses to this entry through the RSS 2.0 feed. Both comments and pings are currently closed.