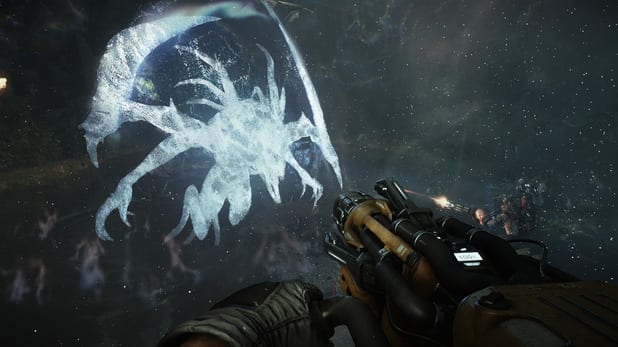 Birds fly off in the distance, and the tracks lead that way. The monster could be anywhere, tricky bastard. The fresh path of broken trees and half-eaten carcasses are a good indication that it’s near. And then you hear the bottomless growl behind you. The team that gave us Left4Dead has set players on a unique four-against-one hunt in which strategy and wits are critical with Evolve. Turtle Rock Studios has baited the trap for you, now all you need to do is survive.

Even though the game features drastically different styles of gameplay, first-person view for the hunters and third-(monster, tee hee) while playing as the monster, the two factions control identifiably. Moving and looking around as the hunter or monster is done with the left and right sticks, and activated abilities are assigned to face and shoulder buttons. Depending on your chosen type of hunter or monster, those buttons will trigger different abilities, though usually with similar effects.

For example, Medic hunters will cycle to your medical support device, be it a healing grenade gun or a resurrecting glove, whereas a Support hunter will unleash a shield generator or gun turret. As hunter a button press will activate your jetpack, while as a monster the same button will allow you to perform leaps or even take to the skies. The only real issue with the controls is that, while the default look sensitivity for the hunters is perfect, it seems to be really slippery as the monster.

The uninhabitable world of Shear features a wide variety of terrain and weather effects, not to mention plenty of hostile flora and fauna that blend perfectly into the environments. In this alien world, the evidence that colonization has failed is all too apparent with overgrown buildings and construction equipment becoming one with the ground beneath it.

Every creature in Evolve, from the main characters to the simple creatures skittering about, is full of life and looks appropriately at home or alien to their surroundings. The rich detail of the environment is crucial to the gameplay as well, because if you happen to lose sight of the monster’s tracks, taking a quick glimpse around and finding some destroyed trees can allow you to give chase once more.

The frame rate clocks in at a constant 30 frames-per-second with an output of full 1080p, and we noticed very few dips, which usually occurred during a monster’s transformation phase. My only nitpick with the graphics department at Turtle Rock is that the puddle reflections are all mirroring the same thing. See? Not a major issue, just picking nits.

The soundtrack was composed by Jason Graves, who worked his ass off to provide players with music that evolves (no pun intended) and changes as frequently and as drastically as the gameplay. While tracking the monster, the sound bed is a muted up-tempo tribal beat that ramps up in intensity upon contact with the beast.

The banter between all of the characters before and during the hunt is often hilarious, very well performed and completely useful. It’s not rare to hear Val point out some tracks or hear Markov ask the robotic character, Bucket, about his own inner workings.

The concept of Evolve is very simple: four hunters work together to track down one monster. That one monster must avoid the hunters’ tracking skills in order to feed enough to develop to their next level. Once the monster reaches level three the rules of engagement change dramatically, as the hunters must now defend a Power Relay station from being destroyed. And that’s only the Hunt mode!

There’s also Nest (hunters destroy monster eggs), Rescue (monster tries to eat colonists), and Defend (hunters defend a ship while it is being repaired). Rounding things out is a mode called Evacuation, which sets up five rounds that change depending on the victor of the previous round.

For example, if the hunters win the first hunt, the next level could have sentry drones flying about that can point out the monster. Conversely, had the monster won previously there might be an overabundance of food for him to eat in the next area.

Evacuation is one of the most enjoyable modes to play, but finding a group that’s willing to sit for five consecutive matches — that could last more than 30 minutes a piece — can be quite difficult. Nevertheless, drop-in and drop-out features will look to fill in the gaps in your roster.

With the unique cast of characters, their superb fulfillment of roles, and some pretty damn scary monsters to play as, Evolve pits team play and cooperation versus survival instinct — and that is something has never truly been captured in a game before.

Pick this up! People bitched and moaned that 2k Games released a bunch of day-one downloadable content that was all completely cosmetic and optional to the point that they had seemed to forget that there is a damn good game underneath all the knee-jerk reactions. If you’ve got a couple friends that are looking for an unforgettable gaming experience, get Evolve… seriously.

By Jeff Cater
Tags: Evolve, Left4Dead
This entry was posted on Thursday, February 19th, 2015 at 12:30 am and is filed under Jeff Cater, Video Game Reviews. You can follow any responses to this entry through the RSS 2.0 feed. Both comments and pings are currently closed.