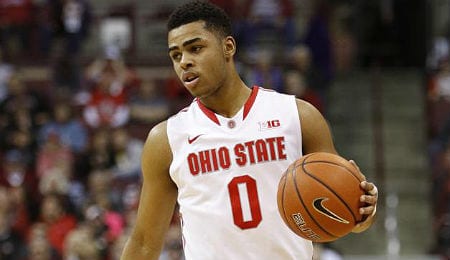 D’Angelo Russell has burst onto the national stage this season. (Paul Vernon/Associated Press)

Some players have proven they’re exactly who we were expecting them to be this season. Jahlil Okafor has dominated. Frank Kaminsky could beat Okafor for the Wooden Award this season. And junior Willie Cauley-Stein is the elite defender we knew he was when the season started. But who else has stepped up and could sneak into the NBA lottery picks in the 2015 NBA Draft?

D’Angelo Russell, PG/SG, Ohio State Buckeyes: Nobody saw Russell coming this season, but they certainly know his name now. The Ohio State freshman guard has exploded for averages of 19.1 points, 5.8 rebounds and 5.5 assists while shooting better than 43 per cent from beyond the arc and accumulating some of the finest highlights from college hoops this season (see video below). According to CBS, Russell is now the third-best prospect in the NCAA. This kid’s draft stock is on the rise, baby!

Kevon Looney, PF, UCLA Bruins: Looney has also come out of nowhere to be a top-ranked prospect, should he declare as expected, in the 2015 NBA Draft. The 6’9” freshman has drawn a variety of comparisons to a top 10 pick from last year’s draft, Noah Vonleh. Vonleh’s Charlotte Hornets are listed at +10,000 at TopBet to win their conference, but the big man’s rebounding and blocking continue to look promising for a Hornets team that is playing the long game at this point. Looney would provide a similar value to one of the teams tanking out the rest of their NBA schedules at the moment. This dynamic young star should be a top 10 pick in this year’s draft — unless he shocks the world by opting to return to Westwood.

Jerian Grant, PG, Notre Dame Fighting Irish: Notre Dame is having a resurgence in the ACC and that starts and ends with its explosive point guard. As the leader of one of the best offenses in the country, Grant is averaging 16.8 points and 6.3 assists after missing a season on academic suspension, so there is an upside-downside to his age (23). As a late bloomer, his window will be shorter in the NBA, but the way he’s playing now, and with the added maturity of an extra couple years, he may be able to produce sooner than later under basketball’s brightest lights.

Now it’s your turn. Which top NBA prospects will you be watching as we head towards March Madness?

By Perry Mills
Tags: 2015 NBA Draft, Frank Kaminsky, Jahlil Okafor, March Madness, NCAA
This entry was posted on Thursday, February 19th, 2015 at 11:51 am and is filed under BASKETBALL, College sports, Guest post, Prospects. You can follow any responses to this entry through the RSS 2.0 feed. Both comments and pings are currently closed.