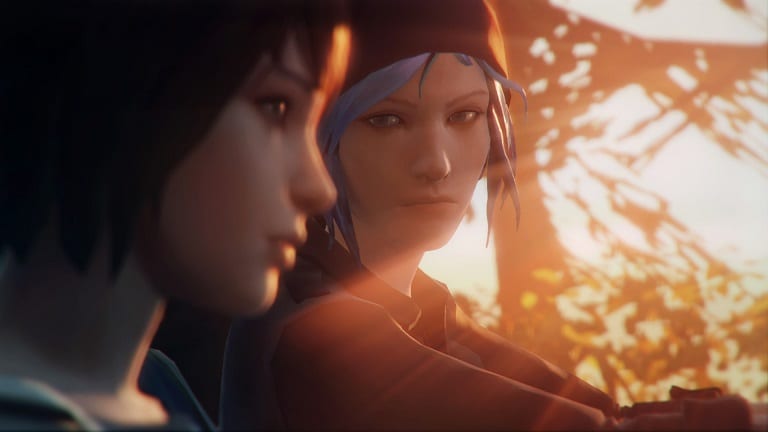 Nothing says “rebel” like a chick with blue hair.

When gamers think branching, episodic titles, there’s little doubt which company comes to mind: TellTale. In fact, the developer behind the critically acclaimed Walking Dead series, as well as the ongoing Game of Thrones and Tales from the Borderlands titles, seem to have all but cornered the market on it. Square-Enix hopes to change that with the launch of Life is Strange, a five-part interactive drama that begins with the arrival of Chrysalis.

One area where Life is Strange makes TellTale’s offerings feel outdated is the controls. Granted, we’ve never really complained about it in Walking Dead or the others, but that’s because precision and speed aren’t necessary 99 per cent of the time. Gliding smoothly through the Blackwell Academy while boxes to interact with objects pop as you look at them is a much cleaner setup, however, and it shows the problems with TellTale still working off a point-and-click system.

Some minor issues do arise from this method, primarily when objects are very close to one another, which can make it tough to target the right one. The time travel mechanic also feels a little loose in regards to how fast you move along the timeline — maybe it was us, but it sure seemed like the option to travel back in time at a faster rate didn’t always function properly.

Made with the Unreal engine, Life is Strange has a clean, inviting look. Character models look good without being photo realistic, and there’s plenty of attention to detail in areas like the dorms and your friend’s house. Viewed as still images it may not seem dramatically superior to what TellTale has been producing, but in action there’s really no comparison. Choppy animations and dips in the frame rate have long plagued TellTale’s efforts, whereas here things move fluidly throughout.

Although we hate to keep comparing everything to TellTale, their position within the genre makes it only natural to keep coming back to it. And on the subject of voice acting, they’re still the king. That’s not to suggest Chrysalis is bad. It’s just uneven. The dialogue isn’t as smartly written, which leads to some, dare I say, “hella” awkward phrasing and conversations. Your internal monologue sounds odd from time to time as well, though that’s hardly unforgiveable considering Max shares thoughts about seemingly every single object in the game. The soundtrack is enjoyable with a few standout moments.

Max Caulfield has come unstuck in time. Alright, so it isn’t exactly Slaughterhouse-Five, but the game starts you off with Max having a vision of a massive tornado only to awaken in class. She’s your typical 18-year-old artsy type, except that she can manipulate time — a fact that Max finds both exhilarating and frightening, and one that immediately differentiates Life is Strange from TellTale’s offerings. While they’re all built on decisions and consequences, developer Dontnod has created the central mechanic of limited time travel and structured the entire game around it.

We say limited because once you move from one section of the chapter to another your decisions become locked into place. Put another way, you’re only allowed to rewind and change the moment you’re actively in. You can’t go back 30 minutes (or a previous checkpoint) to alter a consequence. The game gives you fair warning when you’re about to move on, and in fact one of its  more annoying traits is how it always has Max second guess herself.

Time travel isn’t just used as a chance to rethink decisions, either. It’s also necessary to solve the game’s various puzzles. For instance, at one point you need to recover a flash drive that’s in another girl’s dorm room, but it’s being blocked by another student for boy-related reasons. A conversation between the two of you may go nowhere initially, however you’ll pick up information that can be used in a second attempt at the same chat, which gets to the root of the issue.

One of the more impressive things about Life is Strange is that it doesn’t shy away from controversial topics with things like teen pregnancy and illicit drug use shown in the first episode. It helps give these new characters some depth, and it’s nice to be given a chance to spend time with them in regular situations to create familiarity and an emotional connection. The game does stumble with the execution at times, but that doesn’t change the intent.

Much of who Max is as a person revolves around her love of photography, and that passion is smartly implemented into the gaming side by offering the chance to take optional pictures. These situations aren’t readily apparent in most cases, which means you’ll need to explore and talk to other students to locate them — all but one of Chrysalis‘ trophies/achievements are earned via these hidden photo ops, so it’s a clever way to encourage players to explore the world.

Things have a tendency to move pretty slowly here, which won’t appeal to everyone. Keep in mind, however, that Dontnod is creating a world from scratch (not adapting a known commodity) so it’s important to lay the groundwork for the four remaining episodes. Just be ready to wade through more teenage angst than you’re accustomed to.

It’s exciting to see Square-Enix stepping into a genre that has become synonymous with TellTale as they display different strengths and ideas. Chrysalis is a strong opening salvo in the Life is Strange episodic series, and we’re looking forward to seeing where it goes from here. If you’re a fan of what TellTale has been doing these past several years you should absolutely give this a chance.

By HC Green
Tags: Telltale Games, Walking Dead
This entry was posted on Sunday, February 1st, 2015 at 5:00 pm and is filed under Herija Green, Video Game Reviews. You can follow any responses to this entry through the RSS 2.0 feed. Both comments and pings are currently closed.