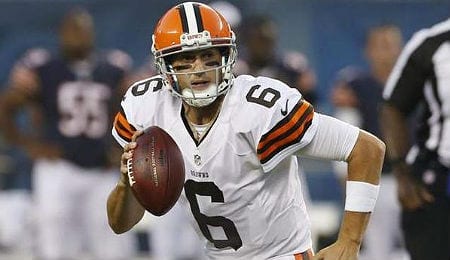 With the season’s first month’s stubble gaining some length, the bye weeks probably have you going full beard. While it’s okay to get cute or creative with your lineup, remember not to gamble on word of mouth. You must read and research for yourself and that’s why we are here for you, so without further ado we give up our Wire Troll picks for Week Seven.

Brian Hoyer, Cleveland Browns: It would seems the vast majority of NFL nuts had Johnny Manziel starting by now for the assumed sub .500 Browns. Yet, Hoyer has inked his own Brian Sipe-like script. Some dramatic comebacks were followed by mature game of keep away vs. Steelers on Sunday. Cleveland drafted the silver-spooned Manziel to be its future but Hoyer is certainly its blue collar present. With just one INT to seven TD passes, he is a quality Fantasy backup rather than a must-start. Oh yeah, did we mention the Browns get Jacksonville this weekend, then they host Oakland, followed by Tampa Bay. Clearly, Hoyer has been better in real life than he’s been in Madden NFL 15 (see video below).

Isaiah Crowell, Cleveland Browns: Even with starter Ben Tate doing a pair of end zone celebrations, Crowell got a TD of his own on Sunday. The Browns nickel-and-dime-you-to-a-slow-boring-death offense isn’t actually that conducive to Fantasy owners that search for the bell cow. Crowell had a quiet Week Five as Cleveland needed to claw its back from large deficit. However, with the lead vs. Pittsburgh the ground and pound burned many a worm. Rookie Crowell, who we didn’t think was worth discussing in our post draft coverage, has four TDs and is averaging 5.4 yards per rush. Oh yeah, did we mention they are playing Jacksonville in Week Seven?

Theo Riddick, Detroit Lions: The Lions apparently asked Riddick to do his best Reggie Bush impression and he listened. Five catches for 75 yards and TD later, Riddick had filled the role in solid fashion. Some put stock in George Winn and for that we are sorry. Riddick proved to be the Bush clone and the Lions should use him as such with the fragile former Heisman trophy winner nursing a pesky ankle injury. Dynasty alert: Now that Motown has seen Riddick make a difference, his future in silver and blue could brighter.

Antone Smith, Atlanta Falcons: As one of the many preseason Devonta Freeman pimps, we viewed Smith — the five year-pro from Florida State — as an afterthought. The fellow former-Seminole Freeman has had a murky to non-existent season so far and Smith has found the end zone four times. Many experts have been screaming for Smith to take over as RB1 in Atlanta. While Steven Jackson remains healthy, Smith seems to be relegated to RB2 for time being. What is certain is that Smith will get his touches even though he sees under 14 per cent of the team’s total offense snaps.

Jarvis Landry, Miami Dolphins: Landry got his own party started on Sunday as he gashed the Packers for Miami’s first TD. His total stat line of 6/75/1 wasn’t Fantasy gold, but those of you dealing with injuries to super studs Calvin Johnson and A.J. Green should have your ears tuned in to Landry moving forward. Our NBA editor/resident Dolphin homer J.R. Anderson calls Landry “Juice” and we see him aging into a fine wine. Landry is growing and adding him now will save you some bucks later. Dynasty owners, we are talking to you especially.

Robert Woods, Buffalo Bills: The thing with second-year WRs is that we love them. And Woods has this distraction named Sammy Watkins and a running back duo that future opponents need to game plan for. Given the addition of Mike Williams this offseason, Woods seemed to be a forgotten man in the Bills scheme. Now after recording at three least receptions in every game but one so far Woods dropped a line of 7/78/1 in Sunday’s loss vs. New England. He has seen action in 91 per cent of the team’s offensive snaps and that spells opportunity for a repeat performance. Trust him as a low-end WR3.

By Josh Johnson
Tags: Brian Hoyer
This entry was posted on Tuesday, October 14th, 2014 at 11:38 pm and is filed under FOOTBALL, Josh Johnson, The Wire Troll. You can follow any responses to this entry through the RSS 2.0 feed. Both comments and pings are currently closed.