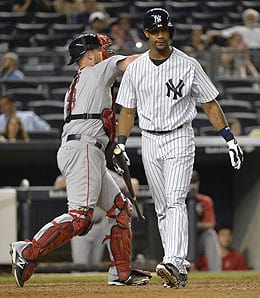 Like countless others have done, Chris Young has gone from one team’s trash to the Yankees’ treasure. The latest Bronx hero has regained his power stroke, while in Baltimore, just hit the rewind button two months and you will notice we recommended the then-Chicago White Sock (the “x” in Sox always makes life complicated) Alejandro De Aza, and he’s back in business in Charm City. A look now at this week’s Wire Troll recommendations.

Chris Young, LF, New York Yankees (ESPN: 8 per cent owned; CBS: 10 per cent): Bonnie Tyler sang “I Need a Hero,” and now it’s clear Young was listening. The former Met has three homers in just over a week since donning Pinstripes, including a walk-off three-run shot (see video below) and a go-ahead blast in extra innings. Young’s average with the Bombers (.429) is more than double his .205 mark with their cross-town rivals. Ride the hot hand while you can.

Alejandro De Aza, OF, Baltimore Orioles (ESPN: 33 per cent owned; CBS: 26 per cent): De Aza has experienced a rebirth, not to mention a 16 percentage point spike in ownership over the past week. All he’s done since joining the Orioles is go 13-for-33 (.394) with five extra base hits, including two homers. With Chris Davis now suspended for the season, De Aza’s bat will come in even handier for the playoff-bound O’s.

Josh Fields, RP, Houston Astros (ESPN: 7 per cent owned; CBS: 6 per cent): Fields has been solid in the closer’s role, with saves in his last two appearances after some shaky outings by veteran Chad Qualls. The Astros don’t exactly provide their relievers with a plethora of save chances, but Fields might be good for the rare ones that he has.

D.J. LeMahieu, 2B, Colorado Rockies (ESPN: 11 per cent owned; CBS: 27 per cent): Speaking of reliable infielders, the hard-to-spell LeMahieu is putting up De Aza-like numbers in September, going 13-for-35 (.371) with a homer and five RBI. LeMahieu and every other Rockie will be using September as an audition for 2015, so he might be worth a look.

Donovan Solano, 2B, Miami Marlins (ESPN: 2 per cent owned; CBS: 2 per cent): Okay, we promise, just one more second baseman to pump up here… Solano has come up with some clutch hits this season and one of his biggest games came last week against Atlanta when he racked up four hits, his second such occurrence against the Bravos this season.

Daniel Corcino, SP, Cincinnati Reds (ESPN: unowned; CBS: 1 per cent): Corcino gave the Reds an outstanding spot start in place of Mat Latos, allowing just two runs on two hits in six innings against the Brewers on Friday. The youngster just may get another look from the Reds… and Fantasy owners.

Nathan Karns, SP, Tampa Bay Rays (ESPN: unowned; CBS: 2 per cent): Another potential one-hit wonder worth taking a flyer on is Karns, who blanked Toronto over seven innings on just two hits Friday with eight strikeouts. Drew Smyly has been shut down for the year, so Karns will have a chance to prove his worth here in September.

Daniel Nava, OF/1B, Boston Red Sox (ESPN: 1 per cent owned; CBS: 9 per cent): Nava was Mr. Clutch last season but regressed so badly early on that he was sent to the minors. But he may be finding his groove again at the end of a lost season in Beantown, as he has three multi-hit games in September with a homer and six RBI. With David Ortiz and Allen Craig getting occasional breathers, Nava will find his way into the lineup just about every day down the stretch.

By Michael Seff
This entry was posted on Sunday, September 14th, 2014 at 8:35 pm and is filed under BASEBALL, Michael Seff, The Wire Troll. You can follow any responses to this entry through the RSS 2.0 feed. You can skip to the end and leave a response. Pinging is currently not allowed.