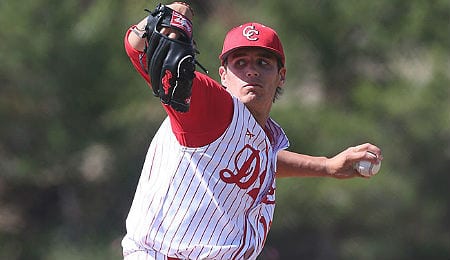 Today, we continue our analysis of each division’s Draft haul with the American League West.

The Skinny: What once appeared to be an embarrassment of riches for the Astros has turned into flat-out embarrassment. Aiken will not don an Astros uniform after a failed post-Draft physical sent everything spiraling and the Astros never got him signed before the deadline. That will put more significance on the development of their other top picks, including Fisher, a fast-improving hitter who was a sixth-round pick by the Rangers in 2011. He’s already showing why some projected him as a top 10 pick before a wrist injury this year, as he’s raking at Low-A, including a four-hit effort on Wednesday (see video below). Expect him to move fast, as it’s clear he’s already too advanced for the NYPL. Reed, a 25th rounder in 2011 by the Mets, was Kentucky’s top pitcher, and he still has room to develop at the plate. Mengden began his collegiate career as a two-way player before focusing on pitching. He has a wide array of pitches and could develop into a solid starter down the road.

Bottom Line: Ultimately, this draft will be remembered for the botched Aiken deal, which is somewhat of a shame considering that the overall haul for the Astros was pretty solid, particularly Fisher (who slipped unfairly because of the wrist). Still, the miscommunication and subsequent failure to bring Aiken on board makes the draft mostly a flop, because Aiken was its crown jewel, and supposed to be the top player available in the entire draft.

The Skinny: The Angels front-loaded their Draft with pitching and overloaded on college players, tabbing hurlers with each of their first five picks before finally switching gears with Abbott. All told, they took just three high school players. Newcomb (6’5”, 240 pounds) joins Jeff Bagwell as the only Hartford players picked in the first 10 rounds after setting a school record this year with 92 strikeouts in 72 innings. Gatto, who comes from a school that has never had a player drafted, has room to improve his secondary pitches, but his mid-90s fastball has good sinking movement. Ellis (6’5”, 205 pounds) had a stellar junior year, going 10-1 with a 2.16 ERA. Abbott, 20, was offered a scholarship to the University of Florida. He is a lefty-swinging outfielder/first baseman with solid raw power.

Bottom Line: The Angels may have overloaded on pitching, but Newcomb is a very strong pick in the mid-first round. Los Angeles also focused on experience by taking primarily college players, which is a savvy move if its goal was to immediately improve the system depth at the higher levels. There seems to be some margin for error here.

The Skinny: In Chapman, Oakland got the 64th-ranked prospect by Baseball America. He’s a two-way player who can actually touch 98 mph with his fastball but was tabbed to be a third baseman. In fact, Chapman is the self-proclaimed best defensive third baseman in college. Well, at least he doesn’t lack confidence. Whether Chapman’s power develops remains to be seen. The A’s went pitching with picks two through five, including Gossett and Graves. Gossett averaged a strikeout per inning in a dominant junior year for Clemson, while Graves projects as a solid starter down the road with a mid-90s fastball and evolving slider.

Bottom Line: The A’s added some nice depth to their farm system without making a major splash in this year’s Draft. If Chapman’s offense follows his defense, he could turn out to be a steal at No. 25.

The Skinny: Jackson, whom we profiled at the end of May, slid to six, which was actually a little surprising, meaning the Mariners got themselves a player at least some considered to be the top position player in this year’s Draft. Morgan (6’4”, 220 pounds) was the second of three consecutive outfielders the M’s took at the top of their Draft and projects as a right fielder. Cousino is a defensive wizard whose future could hinge on whether his bat follows suit. Yarbrough is a bit of a project the 6’6” southpaw has a lot of upside. He was taken in the 20th round by the Brewers last year.

Bottom Line: Jackson and Morgan are both highly-touted youngsters, and despite the fact that Cousino has to work on the offensive side of his game, his defensive skills are elite. Seattle reached on a number of its pitchers, but scored big at the top of its Draft.

The Skinny: Texas was like a kid in a candy store when it came to picking pitchers in this Draft. With 27 arms, the Rangers are hoping that their throwing-a-bunch-of-picks-at-the-wall-and-seeing-what-sticks strategy will work. That very well could be Ortiz, who helped Team USA to a gold medal at the 18-and-under World Cup in Taiwan in September. He has a smooth delivery and a fastball that can touch 97 mph, but a forearm injury dropped his stock. Forbes has plenty of room to grow into his 6’4” frame, but he brings excellent speed and a strong infield arm to the table. Martin has only thrown 134 2/3 innings over the last three years, but posted impressive strikeout numbers last season. Texas may have reached on him considering he did not crack Baseball America’s Top 500 prospect list.

Bottom Line: The Rangers’ main priority was pitching, and they got a lot of it. Whether quality matches quantity remains to be seen. Ortiz and Forbes have great potential, but there are some legitimate concerns as well.

Now it’s your turn. Let us know in the comments below how you think your favourite AL West team did in the 2014 MLB Draft.

By Michael Seff
Tags: 2014 MLB Draft, Houston Astros
This entry was posted on Saturday, August 2nd, 2014 at 4:38 pm and is filed under BASEBALL, Draft report, Michael Seff, Prospects. You can follow any responses to this entry through the RSS 2.0 feed. Both comments and pings are currently closed.