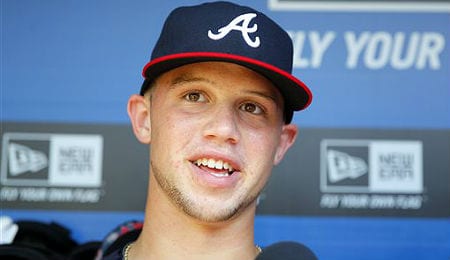 Our recap of the 2014 MLB Draft rolls on with an analysis of how the National League East teams fared.

The Skinny: Davidson not only brings power to the table (listen to the sound the ball makes off his bat in the video below), but quite an arm as well – he can reach over 90 mph on the mound, giving him a real weapon in the outfield. In the Tournament of Stars, he clobbered two home runs in one game, including one shot over 500 feet. Povse is a behemoth on the mound at 6’8”, 220 pounds, and complements a low-to-mid 90s fastball with an above-average slider. Dykstra brings name recognition in being the son of former Major Leaguer Lenny Dykstra, but holds his own with a similar tenacity and a .403 average in 99 career high school games.

Bottom Line: Following Davidson the Braves nabbed three pitchers, including Garrett Fulenchek (second) and Chad Sobotka (fourth), but all come with question marks. Davidson, though, could be quite a find if his power continues to develop.

The Skinny: Kolek, a hurler we profiled prior to the Draft, appears to be the real deal. Powerful and polished, the burly righty can touch 100 mph with his fastball and buckles knees with a powerful 12-to-6 curve. One day, he’s going to combine with Jose Fernandez to form a hell of a one-two punch at the top of the Marlin rotation. Anderson, committed to Southern Miss, is more of a defensive catcher at the moment, but could develop his power if he adds some bulk to his 6’3”, 180-pound frame. Twine is a rather intriguing prospect. He was considered one of the best Texas high school running quarterbacks, once rushing for 534 yards in a single game. Also a track star, Twine has premier speed and athleticism, and now needs to find a way to translate that into stardom on the baseball diamond.

Bottom Line: The Marlins selected 23 pitchers to continue stockpiling arms to a farm system that already has plenty of flash and substance, but after Kolek, their next four picks were all position players. Including a supplemental pick in the third round, Miami got five players prior to round four.

The Skinny: Conforto brings a left-handed power bat to the Mets’ organization, and led the Beavers to the College World Series during a 2013 season in which he was the Pacific-12 Player of the Year. There are questions about the rest of his game, but his long ball potential is quite enticing. Ramos, on the other hand, is a defensive ace. A Florida Atlantic commit, his glove skills override concerns about his bat. Prevost, a 6’8”, 225-pound pitcher who also played basketball in high school, had a breakout senior campaign at Seton Hall, going 12-2 with a 1.62 ERA. In his first two college seasons, Prevost only appeared in 12 games.

Bottom Line: The Mets, who did not have a second-round pick, took 23 pitchers with their 39 selections, including several big bodies (Brad Weick, seventh round, 6’9”; James Duff, 20th, 6’6”). Conforto’s power will be essential in defining this Draft class because there are big concerns about his overall skill set.

The Skinny: Nola’s stock skyrocketed throughout a season in which he spearheaded a dominant LSU rotation. He is already off to a solid start in the Phils’ system, going 2-3 with a 3.16 ERA in six starts (seven games) with High-A Clearwater before making his Double-A debut in early August. Nola is very polished even by college pitcher standards and entered the 2014 season as Baseball America’s fifth-ranked college prospect. Imhof (6’5”, 220), a southpaw complement to Nola, is also pretty advanced, featuring solid cutting action on his low-90s fastball. Brown is intriguing in that he was a two-way player for the Waves, armed with a low-90s fastball and the athleticism to play the outfield. He will be a project either way but represents the versatility the Phillies got out of this Draft. And in an era of uncertainty surrounding long-time Phillies first baseman Ryan Howard, Hoskins (equipped with the same initials, ironically) could be a potential successor. He has terrific raw power from the right side.

Bottom Line: Given that Nola is already impressing in the minors, the Phillies have to be pleased given that they are enduring a rebuilding period (even if they haven’t quite admitted that yet). As a whole, the Phightin’ Phils addressed some areas of need with solid young players in this year’s Draft.

The Skinny: The Nationals were unable to sign their second-round pick, southpaw hurler Andrew Suarez out of Miami, so Fedde’s success is all the more critical to how this Draft is ultimately judged for Nats GM Mike Rizzo. Fedde, a former high school teammate of current National Bryce Harper, has a great arm, throwing in the low-to-mid-90s. However, he fell to No. 18 because he is recovering from Tommy John surgery in May. Reetz is more of a line-drive hitter, but is a terrific athlete that could excel at other positions if catching doesn’t pan out. Dickey (no relation to R.A.) is an overachieving type who averaged 10.6 K/9 IP last season in leading his school to its first Junior College World Series in 22 years. He can touch 97 mph with his fastball and also features an improving slider and changeup.

Bottom Line: Given Washington’s inability to lock up Suarez and Fedde’s recovery from Tommy John, the Nats have a long way to go to convince anyone this was a successful Draft. There is little flash, so for Nationals fans, here’s hoping there’s at least some substance.

Now it’s your turn. Let us know in the comments below how you think your favourite NL East team did in the draft.

By Michael Seff
Tags: 2014 MLB Draft
This entry was posted on Saturday, August 23rd, 2014 at 12:59 pm and is filed under BASEBALL, Draft report, Michael Seff, Prospects. You can follow any responses to this entry through the RSS 2.0 feed. Both comments and pings are currently closed.