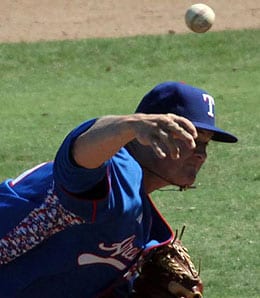 Today we continue our coverage of the upcoming MLB 2014 Draft with a look Tyler Kolek, a Texas high school righty projected to go as high as No. 2 overall. The 18-year-old is considered the top high school arm in the draft.

One of the first things you notice about Kolek is his mechanics (see video below). They are consistent but not particularly polished, especially the finish in his delivery. He comes across his body to the third base side of the mound, which makes you wonder if his command could be hindered. Kolek’s stuff is potentially dominant, with a fastball that hovers around 99 mph, and his 6’6”, 250-pound frame is imposing. His curveball and slider are works in progress, but of course, we love the fastball (who doesn’t?), as it can hit as high as 102, which is unprecedented for a high-schooler.

Baseball America feels that there is enough support among scouts to project Kolek as a front-of-the-rotation power pitcher down the road, and noted that he cleaned up his delivery over the spring. MyMLBDraft.com stresses that his secondary pitches all need improvement as he has yet to develop a real feel for them, and there is also concern whether he will consistently throw strikes. In fairness to his three-quarters, cross-body delivery, Baseball Prospectus feels that Kolek brings a bit of deception to the table, especially when hitters are trying to spot the release of the ball. The fastball is a little straight, but yes, it’s fast.

The Astros sent the ultimate flame-thrower (Nolan Ryan) to check out Kolek, but don’t count on the them tabbing the righty with the No. 1 pick. John Manuel of Baseball America has Kolek going to Philadelphia at No. 7 in his Mock 2.0, while Keith Law of ESPN Insider expects the Chicago Cubs to grab the burly hurler at No. 4. MyMLBDraft.com is the most complimentary, with Kolek going No. to the Miami Marlins.

As of right now, it’s hard to imagine Kolek falling below the top five. He’s simply too physically gifted and in a draft rich with power arms, there may be none more powerful than his. Fellow hurlers Brady Aiken and Carlos Rodon could be taken ahead of him, as could catcher/outfielder Alex Jackson, so as things stand currently, the Cubs at No. 4 seems like the most plausible destination for Kolek.

Kolek is built to throw a lot of innings, and it’s hard to envision him not winding up at the very least as No. 2 or 3 starter. Could he be the next great big Texas arm in the mold of Roger Clemens, Josh Beckett and Shelby Miller?

Now it’s your turn. Let us know in the comments below where you think Kolek winds up.

By Michael Seff
This entry was posted on Sunday, May 25th, 2014 at 4:07 pm and is filed under BASEBALL, Draft report, Michael Seff, Player profile, Prospects, Scouting Report. You can follow any responses to this entry through the RSS 2.0 feed. You can skip to the end and leave a response. Pinging is currently not allowed.