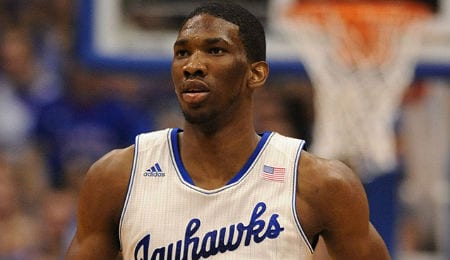 Joel Embiid slipped in the draft because of his injury. (USATSI)

Joel Embiid may have been the third overall pick in the draft, but popular opinion suggested if not for the injury, he would have gone first. The 76ers have just been down this road with Nerlens Noel, and elected to take a second trip. In his 15 games at Kansas, Embiid showed raw talent and something that one can never be taught — size.

Obviously the centre will need to bulk up while recovering from surgery on his fractured right foot, in which two screws were placed in his navicular bone — a procedure expected to sideline the big man for up to eights months. The back injury Embiid suffered at the end of last season already made teams pessimistic about signing the 7’0″, so this injury ultimately crushed his chances of going number one. Let’s just hope he’s not the new Greg Oden.

Aside from that, he certainly did not make a name as a scorer — only putting up 11.2 points per game. As for rebounds, Embiid averaged a meager 8.1, which is just not going to cut it for a big man. There is already one Roy Hibbert, no need to saddle the NBA with another.

Philadelphia seems to be taking a page out of The Spurs’ cookbook by implementing a twin towers situation, with scoring guards (if Tony Wroten ever gets the memo), mixed with role players who can get the ball up the court at a serious pace. This approach makes sense considering Coach Brett Brown branched out from Gregg Popovich’s camp. Brown is putting together a team for the future and Embiid should have a huge role in their plans moving forward.

Embiid’s shot blocking prowess will be a much-welcomed asset, especially when you consider that playing beside him will be Noels — another shot blocker, and that gives Philly a huge advantage on D. For the Sixers, we think this was the right pick — for other teams, maybe not so much. There is no reason to believe they will be any good this season, so the chances of deciding to rush him back are negligible. Embiid will most likely miss all 82 games.

Assuming he can get some work in this season, we should get our first glimpse of him as a pro at the Summer Leagues in Orlando or Las Vegas next July. In the meantime, we can keep up with Embiid’s cyber stalking of Rihanna (see video below). Hey, at least the dude has a sense of humour!

Choosing to take Embiid also lowers the normal expectations set forth by the media for top rookies. We’re sure questions about how the team feels it benefit from his presence will be a constant theme, but other than that, he can just continue to recover. Once he’s healthy, Embiid has a chance to claim and lock down a starting job for many seasons to come — if he produces at the standard to which the Sixers will hold him to.

Taking a chance like this for the second year in a row (remember that the Sixers gambled on Noels in the 2013 draft) shows some real stones, so it will be interesting to see if it pays off. Regardless, it shows Philly is serious about building a contender — and they very well should be after last years ghastly performances. Embiid could really shine under Brown, who assisted in the development of Tim Duncan — who actually had a similar experience to Embiid before entering the league.

Obviously you cannot draft Embiid for the upcoming season in any re-draft leagues. In a keeper league, it all depends on how many players you are allowed to retain for next season, as well as how many IR spots your league permits, and where you are in your stages of rebuilding. If you are starting fresh, we do not see how you could draft him unless you are able to keep about eight guys.

There are a bunch of young centres that have already developed that can help you stuff your stats immediately. If your season does not prove to be successful, you can always add Embiid if he’s available, or trade for him if you have a piece someone might be interested in. He could be a real sleeper starting in the 2015-16 season, but for this season, you might want to let someone else deal with the dead spot. Injuries pile up — as we all have experienced — so there’s no sense in limiting your options, in our opinion.

Now it’s your turn. Let us know in the comments below what you’re expecting out of Joel Embiid long term.

By RotoRob
This entry was posted on Monday, August 11th, 2014 at 8:09 pm and is filed under BASKETBALL, Player profile, Scouting Report, Steve Krebs. You can follow any responses to this entry through the RSS 2.0 feed. You can skip to the end and leave a response. Pinging is currently not allowed.