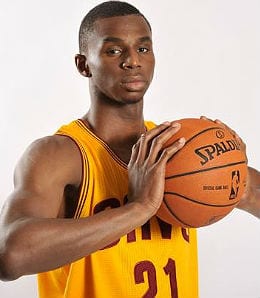 The first pick in 2014 NBA draft, Andrew Wiggins could have the most questions ever for a top rookie about to turn pro. Whether it is finding minutes amongst all the other wing players — which seem to keep coming with every Cleveland signing, — or trade rumours sending him to Minnesota for Kevin Love, it’s been anything but a smooth transition into the NBA for the Kansas product.

Before the 2013-14 season started, magazines, websites and social media outlets were dubbing Wiggins one half of the next LeBron James and Kevin Durant. If that is to be, some doors really need to start opening up.

The lanky, 6’8″, 200-pound Canadian showed there is something very special about his game, posting a 20.8 points, 7.9 boards line per 40 minutes at the University of Kansas. Wiggins’ length and speed made it very easy to break down defenders, and get to the basket. In Summer League action, he seemed to show the same kind of explosiveness getting to the basket with confidence and seemingly with ease. In four games, Wiggins averaged 15.5 points, 3.5 rebounds and 0.3 assists, shooting 40.7 per cent from the field.

The way he can step back at any time and spot up for a 20-footer will confuse defenders at times, but his shooting from beyond the arc is severely in need of improvement. With excellent dribbling skills, a penchant for high volume scoring and his bursting agility, he seems like more of a Jamaal Crawford kind of player, so maybe coming off the bench will suit him just fine.

A deal for Love seems to be high on the priority list for the Cavs and, to be honest, both parties have a strong amount of interest in this scenario. At the other end of this spectrum is the fact Wiggins would have to be included for Minnesota to agree to this trade. Frankly, this could hold a strong bearing over the kind of career Wiggins is in store for.

On one team, he grows under the tutelage of the best basketball player on the planet. All the nuances, hard work, desire and skills can be at Wiggins’ disposal for how ever long James decides to stay. On another team, Wiggins has only Shabazz Muhammad, Ricky Rubio, Corey Brewer and Nikola Pekovic to learn the game from, in other words, it’s not a bright outlook. Sure Wiggins would be the main scorer there, but that necessarily does not mean much (see Evan Turner). We have to give Wiggins a lot of respect for the way he is handling it. Obviously, he’s been listening to Boomer (see video below).

This is a very vital moment in this young man’s career. There are analysts and coaches all over the league who can tell you the importance of landing in the right situation (see Mateen Cleaves, for instance).

In regards to Fantasy, we would think the aforementioned trade would not have much effect on Wiggins’ numbers on a large scale. If he plays for Minnesota, he will have more points, but this will lead to really poor shooting percentages, high turnovers, few assists, and maybe as few as four boards per game — he wouldn’t even be a top 100 player with those kind of stats. If Wiggins plays for Cleveland, less minutes will mean less shots as he’ll probably only be the fourth or fifth option for the Cavs. As a result, he’ll have to do a lot more with his limited minutes than score as the shots won’t be there. So expect more assists and boards, as the Cavs are very much going to be a run and gun team, and a hell of a lot fewer turnovers.

We think you should be tempering expectations either way for the up coming season. On luster alone, Wiggins will be drafted anywhere from the fifth to the ninth round in 10- or 12-team standard leagues, depending on whether it’s a keeper format or not. We are going to be passing on him all together because in Roto, we need diverse production. Even if Wiggins becomes a prolific scorer, he still has at least four categories more to win our affection. The waiver wire is littered with one trick ponies.

There is a lot of work to be done to get Wiggins on the right side of the Fantasy street, and ultimately he may even wind up as one of those players that’s simply better in the real world. Having great skills, and an impressive maturity in dealing with the constant questioning about the looming deal is definitely a good start. However, his true value remains to be seen is all we can really say. Obviously, we do not believe he will be anything near a superstar anytime soon, and from what we’ve seen, Wiggins will more likely become an All-Star down the line.

By Steve Krebs
This entry was posted on Wednesday, August 6th, 2014 at 10:58 pm and is filed under BASKETBALL, Draft report, Player profile. You can follow any responses to this entry through the RSS 2.0 feed. You can skip to the end and leave a response. Pinging is currently not allowed.