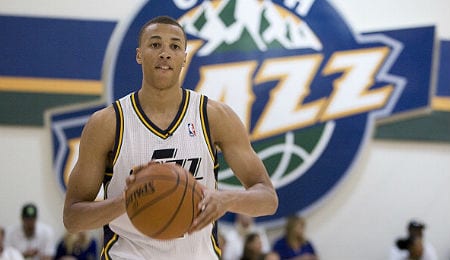 Dante Exum is likely to be exposed in the NBA. (Redrockbasketball.com)

With the fifth pick in the draft, the Utah Jazz selected Australian guard Dante Exum. The 19-year-old begins his transition to the NBA with high praise from certain top scouts who specialize in uncovering foreign talent — and we are really wondering if that’s about it.

Tabbed as a Russell Westbrook type of player that can play either the point or shooting guard, Exum was the first guard taken of the five chosen within the first 20 picks. Obviously that’s a pretty tough comparison to live up to, and it’s really hard to imagine a scenario with success being the end result, unless you count a series of cute Footlocker commercials a success (see video below).

Obviously, this strategy proved to be quite effective considering where he was drafted and the fact that only 60 openings are available.

In the 2013 draft, the Jazz selected Trey Burke, hoping to cement a high calibre point guard for many years to come. One sub par rookie season later, and it’s possible selecting Exum is the backup plan for hopes that never materialize.

The problem with that is strength is essential to any point guard’s success and being listed at 190 pounds (allegedly), does not bold well for Exum. The Western Conference is home to some of the toughest competitors at the one — length would have to be his equalizer. Saying his jump shot needs work is a highly generous assessment — stating it flat out sucks would be a more adequate description.

Exum’s abysmal 30 per cent field goal percentage over the course of five Summer League games certainly did nothing to alter that perception.

His game does supposedly possess one skill that the league is desperately starved for and that is ability to get the ball in the hands of others, but a mere 14 assists in 133 minutes against players with little to no NBA experience would suggest otherwise. We do not anticipate Exum averaging 26 minutes per game during the season, so it’s not a stretch to envision a very low assist total.

To go along with painful shooting numbers (16.7 per cent three-point shooting; 64.3 per cent FT shooting),  the 18.2 points averaged in the 2013 FIBA Junior Team Events seem to be nothing more than dominating at a C level. From any outlook, it would be to tough to not assume Exum is in way over his head, resulting in a bench role at best.

From a Fantasy standpoint, we can see owners taking a late round flier on him — those with a smaller sense of sanity or a higher enthusiasm for risk will stretch hoping for honestly, we have no idea what. Frankly, we’re avoiding him like a fat kid shuns yogurt. There will be so many more options available that will help your teams achieve prosperity.

The fact that Exum will have a coach (Quin Snyder) that has worked everywhere from Russia to being an assistant for Atlanta last season, could offer him an opportunity for minutes early on, but that just might be the kind of rope Exum needs to hang himself in Fantasy and for the Jazz.

Now it’s your turn. Let us know in the comments below what you think of Exum’s chances, both short-term and long-term.

The lanky, 6’8″, 200-pound Canadian showed there is something very special about his game, posting a 20.8 points, 7.9 boards line per 40 minutes at the University of Kansas. Wiggins’ length and speed made it very easy to break down defenders, and get to the basket. In Summer League action, he seemed to show the same kind of explosiveness getting to the basket with confidence and seemingly with ease. In four games, Wiggins averaged 15.5 points, 3.5 rebound and 0.3 assists, shooting 40.7 per cent from the field.