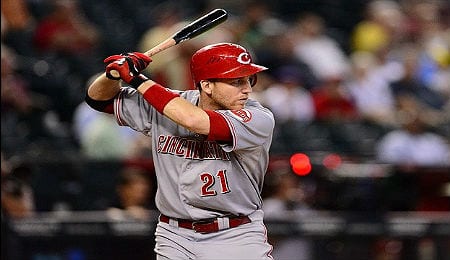 The strategy behind our “Peakers” team was to find guys that played on regular basis in 2013 that we believe could top their total homer output. There is plenty of youth on this team as well as some guys who have underachieved in recent years. We placed 225th for the month of July with 94 totals points. On the season, we are 390th overall with a point total of 437. Anthony Rizzo (32 points): With 25 bombs on the season Rizzo has been solid part of this otherwise fledgling team. His eight homers in July were nice but 23 strikeouts erased any meaning from the 15 RBI he put up. And no, getting him hit by a pitch (see video below) didn’t help us.

Freddie Freeman (minus one point): Besides April (six homers, 17 RBI and 19 Ks) Freeman has been disappointing and his July numbers (two homers, 16 RBI and 27 strikeouts) represent an earthly regression. Jedd Gyorko (14 points): Compared to Freeman, Gyorko has been toilet much of the season (six homers, 29 RBI and 57 Ks). An injury limited him to just seven games played in June and July combined. The good news is he looks healthy with two homers and six RBI in 15 July at-bats. Todd Frazier (one point): After a red-hot June, Frazier slowed considerably with just three homers and nine RBI in July, totals that got almost completely buried by 24 whiffs. Carlos Santana (40 points): This season marked a new chapter for this once offensively promising catcher. Santana became a corner infielder, so of course, his numbers would rise, right? It took a while, but July was very good to him. Santana’s eight homers and 18 RBI did a great job of engulfing his 20 strikeouts. Troy Tulowitzki (10 points): The injury bug infested Tulo again in July. In just 45 plate appearances he did have three jacks, but 10 strikeouts dented their value. Yasiel Puig (seven points): The “Wild Horse” has decent numbers on the season, but July saw his power evaporate. Two homers and 10 RBI mean basically nothing after his 14 whiffs. Giancarlo Stanton (minus one point): Four homers and 12 RBI aren’t a down month for too many MLBers but when your name is Giancarlo and you strike out 33 times you are not a RotoDerby stud. Bryce Harper (minus 14 points): The oft-injured Harper managed an amazing three RBI on two homers in July. But, perhaps even more impressive was the 27 strikeouts he collected. Will Venable (six points): Perennial 20-homer tease Venable entered July with just two homers on the season. The good news is he that he hit three in July. The bad news was the 16 strikeouts for this inevitable forth outfielder.

Now it’s your turn. Let us know in the comments below whether you’ve tried RotoDerby yet and what you thought. RotoRob Fantasy Baseball Weekly Podcast Crave more in-depth Fantasy analysis? Then join us every Thursday at 9 p.m. EST for RotoRob Fantasy Baseball Weekly Podcast on Blogtalkradio as we entertain and edify you for an hour or more each week. This week, RotoRob’s guest is Tim McLeod. Tune in here. Save $1 on the 2014 Fantasy Football Guide Have you picked up your copy of the 2014 Fantasy Football Guide yet? Buy it online here, and save $1 by using Promo code RotoRob14.

By Josh Johnson
This entry was posted on Tuesday, August 5th, 2014 at 10:17 pm and is filed under BASEBALL, Fantasy Leagues, Josh Johnson. You can follow any responses to this entry through the RSS 2.0 feed. You can skip to the end and leave a response. Pinging is currently not allowed.