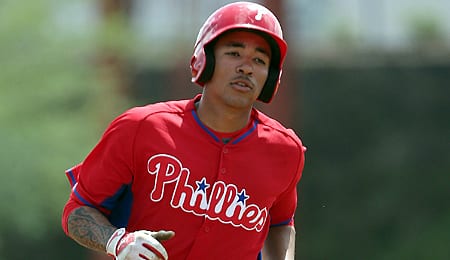 J.P. Crawford will be one of the key attractions at the Futures Game. (Yong Kim/Philly.com)

This week on RotoRob Fantasy Baseball Weekly Podcast, heard every Thursday at 9 p.m. EST on Blogtalkradio, RotoRob was joined by Fantasy Insiders main man Joel Henard, and despite yet another BTR technical issue, we had an awesome time as always.

Among the based we covered:

To hear the Fantasy baseball goodness just ooze from the pores of your speakers, click the play button below.

Now it’s your turn. Let us know in the comments below what you thought of our Fantasy baseball spewings.

By RotoRob
This entry was posted on Friday, July 11th, 2014 at 9:42 pm and is filed under BASEBALL, Joel Henard, Podcast, RotoRob, RotoRob's Fantasy Baseball Weekly. You can follow any responses to this entry through the RSS 2.0 feed. You can leave a response, or trackback from your own site.