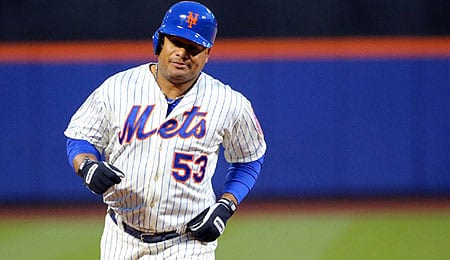 Bobby Abreu still has something left in the tank. (Metsmerizedonline.com)

Bobby Abreu, RF, New York Mets: Is it 2009 again? Abreu, a Wire Troll recommendation early on this season, has rediscovered his stroke of late for the Amazin’s, earning him a 0.1 percentage point boost to a whopping total of 0.3 per cent ownership in ESPN leagues to go along with his one per cent ownership in CBS leagues. But the 40-year-old could be worth a look in NL-only leagues after a 7-for-16 stretch in his last five games, including a 4-for-4 performance on Friday. It’s not a fluke either as Abreu, getting a chance to play regularly, is hitting .308 with 12 RBI for the season. Best of all, the old dude still knows how to work the count (see video below).

Ryan Ludwick, LF, Cincinnati Reds: Clearly, Ludwick did not take kindly to being designated to a part-time role. That could change given his torrid June, in which he has gone 11-for-28 (.393) with two homers, including a 4-for-5 showing Sunday. Keep an eye on the proud veteran’s playing time because if Ludwick gets back to playing every day, his numbers could sneak up on you — or at least the 0.3 per cent of people that own him in ESPN leagues and eight per cent that have him in CBS leagues.

Neil Ramirez, RP, Chicago Cubs: Okay, so a Cubs closer generally doesn’t get as many save opportunities as you’d hope, but Ramirez is getting his chance with Hector Rondon on the shelf, and he seems to have the stuff for the late innings. Ramirez has three saves in June and has allowed just one earned run in his last 14 appearances, so someone (that’s what we’re here for) should alert his Fantasy owners to spread the word. He’s owned in five per cent of ESPN leagues (up 4.4 percentage points in the last seven days) and 12 per cent of CBS leagues.

Drew Stubbs, CF, Colorado Rockies: Come on, people, wake up. Stubbs may be up to 10.2 per cent (up 5.6 percentage points) in ESPN leagues and 21 per cent in CBS leagues, but this isn’t his first rodeo. The former Indian is heating up in June with a 12-for-40 (.300) pace and four multi-hit games, not to mention some run production with a homer and seven RBI. Throw in seven stolen bases on the year and it’s a wonder more people haven’t caught on to Stubbs-mania.

Robinson Chirinos, C, Texas Rangers: Chirinos is unowned in ESPN leagues and only held by five per cent of CBS owners, but he’s shown some occasional pop with five home runs and is 7-for-23 in June with three multi-hit games. His respectable 680 OPS makes him worth a look in AL-only leagues.

Sergio Romo, RP, San Francisco Giants: Owned universally in ESPN leagues and in 94 per cent of CBS leagues, Romo let his Fantasy owners down this weekend with consecutive blown saves. If giving up five runs in the ninth on Saturday wasn’t bad enough, he surrendered a two-out, two-run inside-the-park home run on Sunday, giving him four squandered chances on the year and pushing his ERA to 5.08.

Jean Segura, SS, Milwaukee Brewers: Segura is another universally owned product in ESPN leagues (95 per cent in CBS leagues) who is having a rough month. He is 9-for-54 (.167) with a 374 OPS in June. Segura’s season numbers have plunged as a result, with his batting average flatlining to .247 during his recent slide.

Michael Bourn, CF, Cleveland Indians: Bourn is owned in 82.4 per cent of ESPN leagues and 55 per cent of CBS leagues and has not only slumped at .203 in June, but his stolen bases have plummeted, with just two since May 23. The speedy outfielder somehow has just six on the season despite a .264 average and .306 OBP. If Bourn isn’t bagging steals, he doesn’t offer much value.

Dustin Pedroia, 2B, Boston Red Sox: Pedroia is only 4-for-28 (.143) in his last eight games and his .264 season average makes us wonder if injuries are still pestering him and preventing him from being a pest to opposing pitchers. Despite a Pedroia-like .340 OBP, he has just three long balls in 2014.

Brett Lawrie, 3B, Toronto Blue Jays: Lawrie’s June mirrors his season for the most part, as he is hitting .235 this month and .238 for the year, so his Fantasy owners (100 per cent in ESPN leagues, 88 per cent in CBS leagues) can’t be too shocked, but an early-month power surge has shorted recently. His last nine games not only haven’t netted a homer but also have resulted in just six hits in 31 at-bats (.194), and even with the three dingers earlier in the month, Lawrie hasn’t notched a double or triple since a two-bagger on May 27.

Now it’s your turn. Let us know in the comments below who is rising and who is falling in your books.

Crave more in-depth Fantasy analysis? Then join us every Thursday at 9 p.m. EST for RotoRob Fantasy Baseball Weekly Podcast on Blogtalkradio as we entertain and edify you for an hour or more each week. RotoRob will be joined by Joel Henard this week. Tune in here.

By Michael Seff
This entry was posted on Monday, June 16th, 2014 at 11:05 pm and is filed under BASEBALL, Diamond Stocks, Michael Seff. You can follow any responses to this entry through the RSS 2.0 feed. You can leave a response, or trackback from your own site.