Podcast: Derek Jeter Back Where it all Began 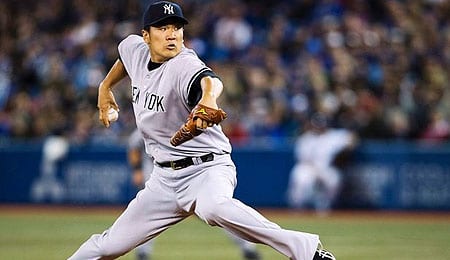 Masahiro Tanaka continues to dominate for the Yanks. (Itsaboutthemoney.net)

RotoRob Fantasy Baseball Weekly Podcast, heard every Thursday at 9 p.m. EST on Blogtalkradio, was back in action as RotoRob’s guest once again was RotoRob.com writer Michael Seff. Other than a typical BTR technical glitch, the show went swimmingly.

Among the issues we broached were:

Click the pointy thingy below to bask in pure Fantasy baseball goodness.

Now it’s your turn. Let us know in the comments below whether you agree or disagree with our dialogue.

By RotoRob
This entry was posted on Saturday, June 14th, 2014 at 3:17 pm and is filed under BASEBALL, Michael Seff, Podcast, RotoRob, RotoRob's Fantasy Baseball Weekly. You can follow any responses to this entry through the RSS 2.0 feed. You can leave a response, or trackback from your own site.