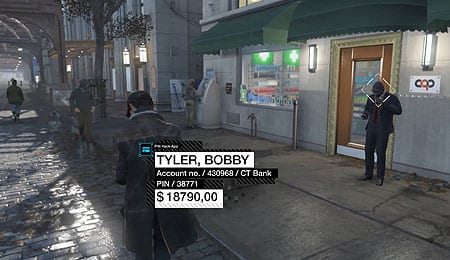 In Watch Dogs, nearly every NPC is a source of data and hacking.

[Note: This game was reviewed using the PS4 version.]

Hyped for years and delayed by months, Ubisoft’s Watch Dogs has finally landed across a range of consoles. The company’s biggest franchise since Assassin’s Creed, it’s a litmus test to see if the development team learned from that series’ growing pains. Don’t forget that at the start of the PS3/Xbox 360 generation, the similarly hyped Assassin’s Creed landed with impressive technical presentation but stifled gameplay, only to be fully fleshed out when the sequel arrived. While Watch Dogs isn’t as tech demo-esque as the first Assassin adventure, it has growing pains of its own — however, underneath is an innovative paradigm shift for sandbox gaming. It’s just too bad that protagonist Aiden Pearce isn’t nearly as engaging as many of the anti-heroes we’ve seen in recent years.

When you assume the controls of Watch Dogs, you’ll find that your muscle memory will flex to other games. The overlying GUI is straight out of the Assassin’s Creed series, and many of the controls come with it. Things like a weapon wheel trigger, the run trigger, aiming, and firing are all standard. Unlike Assassin’s Creed, though, you won’t automatically parkour over obstacles. Instead, a face button is used whenever an icon appears, allowing Aiden to vault or climb over the environment. However, he’s not nearly as nimble as any Assassin, and you’ll find that on-foot movement is often a lumbering experience.

When you’re not on foot, you’ll be driving around virtual Chicago and your instinct will be to commandeer and use vehicles a la Grand Theft Auto. Unfortunately, the developers at Ubisoft havn’t refined the driving controls as much as they needed. Turning is often overresponsive while the vehicles generally feel plodding and weighted except for the motorcycles. (Side note: Aiden is apparently an invulnerable motorcycle rider in the universe, so in addition to motorcycles being the most maneuverable vehicles in the game, they’re usually your best bet for safety.)

Of course, hacking is the biggest hook of the game. It starts with whipping out your phone, so if you hate seeing people constantly staring at their phone, Watch Dogs will get on your nerves. With Aiden’s phone out, you’ll get a graphical overlay with information about every passing person, along with hacking opportunities across the environment. Hacking is as simple as hitting a button, so much so that you can do it while driving — which is key since you can’t fire a weapon while driving.

Virtual Chicago looks great, particularly with next-gen lighting and environmental effects. It’s not the best this young generation has produced, but it’s certainly impressive and — more importantly — immersive. Individual character models don’t fare nearly as well, particularly the faces. We’re guessing this is due to the immense amount of information the game is constantly loading, from NPC details to hacking opportunities to vehicles and buildings at far drawing distances. You’ll notice this particularly in two areas: cut scenes that feature a lot of facial expressions and the info icons over NPCs, as their headshot shows with their data, such as where the person works, what their hobbies are, and how much money they make.

Watch Dogs’ character visuals pale in comparison to standout graphical games from the previous generation such as Beyond: Two Souls, and perhaps this is because the game was released across all current consoles.

In general, the voice acting in the game is strong from the bulk of the supporting cast, though it suffers from a bland protagonist in Aiden. Aiden’s story feels cookie-cutter, and his voice actor (Noam Jenkins) isn’t given much to work with other than speaking in moody gravely tones. Aiden’s generic outfit doesn’t help, and it comes with some strange design choices. Why is his logo on his hat, jacket and face-covering bandana? Isn’t he supposed to be more focused on stealth than branding?

The premise of Watch Dogs was built on the idea of hacking. In the game, Chicago is connected by the CtOS Network, which allows Aiden to pretty much get into anything and everything with his phone. Hacking is done through a single button and you’re constantly prompted to do this — with people passing by on their phone, with street lights, with power grids, with security cameras, and so on.

At the core of the game, you’re using hacking to achieve your goals (for the most part). Trying to drive away from someone? Hack the street lights to block their passage with traffic after you cross the intersection. Need some cash? Hack someone’s phone to transfer money into your bank account. Need a closer look inside a high-security facility? Hack a series of cameras on the grid to get what you need without ever stepping foot into the building.

You don’t always have to hack as part of a goal or mission, though. If you have a voyeuristic itch, you can eavesdrop on phone calls, chats, and home security to catch a glimpse of what’s going on. In addition, NPCs display all sorts of connected data (randomly generated, but amusing nonetheless), giving you the moral decision of whether to take what you need from someone who is in a dire situation or go out of your way to stop a suspected criminal. This quandary is only superficial though, as the game doesn’t really reward or punish you for stealing from the unemployed or cancer-ridden.

Hacking is done simply and intuitively, and it achieves its goal of creating a new mindset towards problem solving. It also gives you multiple paths to finishing goals. This creates the foundation for the biggest change to the sandbox genre in years. Unfortunately, Watch Dogs often deviates from what it does best, and that’s a problem.

In many ways, Watch Dogs stands on its own as a unique entry into the sandbox genre. On the other hand, it’s like GTA-lite, with chase/elude missions factoring in way too often. The lack of strong driving controls and strange in-game physics make these parts of the game. Shooting is a large part of the game, though it feels like it should have been de-emphasized — why would Ubisoft want to create yet another gritty crime open-world experience when it has something special on its hands, particularly when its execution pales to the competition? This especially falters when the game’s police are after you. They’re relentless and sharp, applying a frustrating five-star level of difficulty when you’ve only warranted half of that. (Our personal tip: getaways are easiest to do when you can get to water.)

Watch Dogs also introduces a new type of multiplayer experience, an always-on world where competitors can hack into your game and run by you in real time for various purposes. This is turned on by default, but you can opt out of it. However, this unique type of cat-and-mouse is an innovative distraction and it brings plenty of rewards for your character building.

Various mini-games (such as card games) are available to take up your time, though the amount you partake in that really depends on how much you really want that sort of thing in your campaign. When you factor in all of the random encounters, minigames, side quests, multiplayer, and exploration on top of the 20-to-25 hour campaign and you could easily spend 100 hours with Watch Dogs.

Perhaps it sounds like we’re being hard on the game, but we really did enjoy it and think that it’s innovative in many ways. The problem is that Watch Dogs is a shining example of “too many cooks” syndrome. Had Ubisoft focused on its many strengths, it would have come out better. Instead, Watch Dogs is half-innovation and mediocre GTA clone. In this case, less surely would have been more.

Watch Dogs succeeds in bringing together various open-world genre tropes with an innovative new mechanic. Its shortcomings are forgivable, but hold the game back from living up to years of hype. Since a sequel is inevitable, the bar is raised for a major leap forward — something Ubisoft very successfully did when jumping from the first Assassin’s Creed to the second one.

Now it’s your turn. Let us know in the comments below what you think of Watch Dogs.

By Mike Chen
Tags: PS4, Ubisoft, Watch Dogs
This entry was posted on Tuesday, June 10th, 2014 at 11:00 pm and is filed under Mike Chen, Video Game Reviews. You can follow any responses to this entry through the RSS 2.0 feed. Both comments and pings are currently closed.