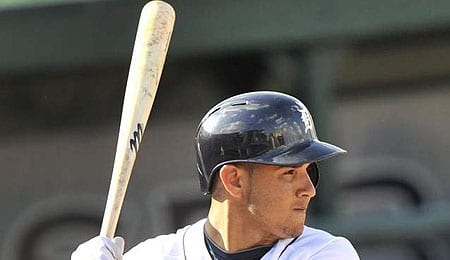 In last week’s Wire Troll, we featured Kendrys Morales as the time to pick him up had arrived. Surprisingly, the Twins have signed the former Mariner to a pro-rated one-year $12-million deal. Who saw this one coming? Morales’ ownership levels are currently at 46 per cent in CBS and 16 per cent in ESPN, so there still is an opportunity to grab some solid power numbers for the second half. If he’s available in your league he should be the top FAAB priority this week.

Without further ado, let’s give this week’s picks of the litter their due accolades.

Eugenio Suarez, SS, Detroit Tigers (CBS: 3 per cent owned, ESPN: unowned): Andrew Romine has struggled badly in attempting to replace Jose Iglesias as the everyday shortstop in Detroit and now that we know for certain that Iglesias is done for 2014, it was time for some changes. The Tigers have turned to young Suarez for some relief. He hit six homers with 27 RBI and swiped seven bags in 155 at-bats at Double-A Erie and didn’t skip a beat when promoted to Triple-A. He even homered for his first career hit in his big league debut (see video below). What’s not to like?

Corey Dickerson, OF, Colorado Rockies: (CBS: 41 per cent owned, ESPN: 21 per cent): Dickerson is going to be the beneficiary of regular playing time for at least the next two weeks as Carlos Gonzalez spends time on the DL resting his ailing finger. In the past week, Dickerson has smacked two long balls and driven in five runs. We think he’s up for the challenge and have been touting him for some time.

Joba Chamberlain, RP, Detroit Tigers (CBS: 13 per cent owned, ESPN: 4 per cent): The good news for Joe Nathan owners and the Tigers is he didn’t cost them the win Saturday. The bad news is that he entered the ninth with a four-run lead and proceeded to allow four hits and two runs in making a game of it. Nathan has allowed 10 earned runs in his past five appearances. Someone else is going to be getting saves in that bullpen sooner rather than later with Chamberlain (who has pitched quite effectively in a setup role) likely to get the first crack.

Derek Holland, SP, Texas Rangers (CBS: 29 per cent owned, ESPN: unowned): Holland is chomping at the bit to return and the time is growing closer every day. One last workout Monday and he should be cleared to head out on a rehab stint. The southpaw, who had a strong 2013, fanning 189 in 213 IP to go along with a solid 3.42 ERA and 1.29 WHIP, will be a welcome addition to both the Rangers and your Fantasy squad.

Kevin Gausman, SP, Baltimore Orioles (CBS: 29 per cent owned, ESPN: 1 per cent): In his second start this season, Gausman was flat out nasty, displaying the skills that made him a top prospect. Against a very good Oakland squad he tossed seven innings of four hit, one-run ball and added six punchouts for good measure. Don’t let this young phenom slip under the radar as a big second half could be in the cards.

Eddie Butler, SP, Colorado Rockies (CBS: 26 per cent owned, ESPN: 2 per cent owned): Butler had a rather inauspicious debut last week. In 5 1/3 IP, the 23-year-old allowed 10 hits, three walks and six earned runs in getting spanked by the Dodgers. The skills are there as evident by his solid season at Double-A Tulsa and the fact that he passed another top prospect in Jon Gray on the Rockies depth charts. But is Butler ready for prime time? Bid cautiously and keep him on your bench for now, pending the results of his next matchup against the Braves.

Pedro Strop, RP, Chicago Cubs (CBS: 5 per cent owned, ESPN: 1 per cent): Neil Ramirez earned the save Thursday. Hector Rondon, who appeared to have the title of closer came back from paternity leave and imploded Friday, allowing four hits and three earned runs against the Fish. Strop got the call Saturday and had a one-two-three ninth to earn the save. This situation is a mess, but a cheap speculative bid could get you a sprinkling of saves from any one of these guys moving forward.

Junior Lake, OF, Chicago Cubs (CBS: 26 per cent owned, ESPN: 6 per cent): After a late-May/early-June slump, Lake has started to heat up again. Saturday he smacked a pair of solo shots against the Marlins. A hot Lake offers both power and speed, so is a worthy add in all formats while he’s swinging a hot stick.

Rusney Castillo, OF, Free Agent (CBS/ESPN: not listed): Castillo’s paperwork is finally in order, so the 26-year-old Cuban veteran is ready to roll. Castillo defected in December 2013 after racking up 21 homers, 84 RBI, 101 runs and 27 stolen bases in 448 at-bats in his last full season in Cuba. In another interesting development, he’s acquired Jay-Z’s Roc Nation Sports to represent him. Castillo will likely to need at least a month or two to get back into game shape but his intriguing mix of power and speed shouldn’t be ignored in Dynasty leagues.

Jeff Locke, SP, Pittsburgh Pirates (CBS: 3 per cent owned, ESPN: unowned): Gerrit Cole has shoulder fatigue which could force him to the DL. The Pirates called up Locke to start Sunday so we’ll all have a chance to judge his performance before setting our lineups. Bid accordingly.

Nick Castellanos, OF/3B, Detroit Tigers (CBS: 45 per cent owned, ESPN: 12 per cent): On Saturday, Castellanos slugged his first homer since May 4 and has now accumulated nine hits in his last three games. Obviously, the slump has ended. Third base is not a deep position this year so when there’s an opportunity like this, it shouldn’t be ignored.

By Tim McLeod
Tags: Kendrys Morales
This entry was posted on Sunday, June 8th, 2014 at 2:31 pm and is filed under BASEBALL, The Wire Troll, Tim McLeod. You can follow any responses to this entry through the RSS 2.0 feed. Both comments and pings are currently closed.