Podcast: Are the Rockies For Real? 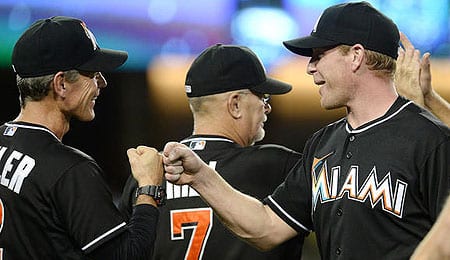 Randy Wolf (right) has a tough act to follow for the Fish. (Jayne Kamin-Oncea/USA Today Sports)

This week on RotoRob Fantasy Baseball Weekly Podcast, heard every Thursday at 9 p.m. EST on Blogtalkradio, RotoRob was joined by RotoRob.com NBA Editor Bob Raymond, back on the show for a fifth time, joining the coveted five-timers club.

Among the issues we addressed:

Simply press the play button below to fill the room with pure Fantasy baseball goodness.

Now it’s your turn. Let us know in the comments below whether you agreed with our ramblings or not.

By RotoRob
Tags: Colorado Rockies
This entry was posted on Friday, May 16th, 2014 at 11:56 pm and is filed under BASEBALL, Bob Raymond, Podcast, RotoRob, RotoRob's Fantasy Baseball Weekly. You can follow any responses to this entry through the RSS 2.0 feed. Both comments and pings are currently closed.