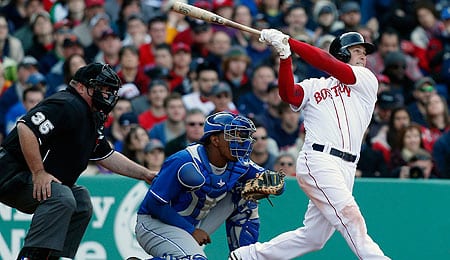 The Red Sox are tired of relying on Daniel Nava. (AP)

After taking a week off for the NHL Playoffs, RotoRob Fantasy Baseball Weekly Podcast, heard every Thursday at 9 p.m. EST on Blogtalkradio, returned this week with a special episode. Not only was RotoRob reunited with RotoRob.com NFL Editor Vaney Hariri, but they were joined by guest Bob Kendrick, President of the Negro Leagues Baseball Museum.

A spirited discussion ensued, covering topics as diverse as:

Now it’s your turn. Let us know in the comments below whether you agree or disagree with our assessments.

By RotoRob
This entry was posted on Friday, April 25th, 2014 at 3:51 pm and is filed under BASEBALL, Podcast, RotoRob, RotoRob's Fantasy Baseball Weekly, Vaney Hariri. You can follow any responses to this entry through the RSS 2.0 feed. You can leave a response, or trackback from your own site.