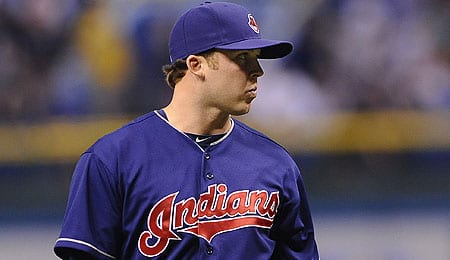 Cody Allen could be earning saves for the Tribe before long. (Brian Blanco, Associated Press)

The 2014 RotoRob MLB Draft Kit continues today with another top 10 list. So while you wonder whether Miguel Cabrera is worth nearly $300 million, let’s examine the top 10 sleepers.

Is there such a thing as a sleeper in the age of instant information? We don’t know if sleepers is the right terminology, so let’s try “undervalued.” A lot of the players listed below are known, but their potential upside — and return on the investment — could be sky-high.

1. Cody Allen, RP, Cleveland Indians: John Axford has been tipping pitches this spring, and while the world seems to have anointed him closer, this battle might not be cut and dried. Last year, Allen posted some truly great numbers — 88 Ks in 70 1/3 IP with an ERA of 2.43 and a 1.25 WHIP — all of which bode well. Consider him a great insurance policy should Ax struggle and gold in deeper formats and holds leagues. Does Allen have what it takes to close? Take a look at the video below for a good analysis of his mechanics.

2. Oswaldo Arcia, OF, Minnesota Twins: In less than 100 games as a rookie, Arcia smoked 14 homers (more than any other AL freshman), drove in nearly 45 runs and held his own with a .251 BA. He won’t turn 23 until May, so there’s plenty of upside here and given his 36 doubles with 17 homers in 469 at-bats in 2012, his success last year was not out of the blue. In fact, Arcia has done well at every level and there is no reason to believe after last year that his batting average won’t improve given that he consistently hit over .300 in the minors. Expect this kid to be an asset for many years to come in the Twin Cities.

3. Kole Calhoun, OF, Los Angeles Angels: Calhoun has consistently produced in the minors, but last year he took it a to a new level at Triple-A (85-for-240, with 15 doubles, 12 homers, 10 steals and massively improved strike zone judgment), necessitating a promotion to the majors. He has little to no competition for a job, and will likely bat leadoff for the Angels, assuming Manager Mike Scioscia doesn’t go squirrely as usual and decide that Erick Aybar is a better option. Calhoun may especially be valuable in OBP leagues, while his double-digit power and speed potential will intrigue all owners. In 195 at-bats down the stretch last year, he hit eight homers, drove in 32 runs and recorded a splendid OPS of 808.

4. Drew Hutchison, Toronto Blue Jays: Hutchison’s recovery from Tommy John surgery is complete. We liked what we saw in the AFL last fall and he’s continued to gain strength while enjoying a great spring. Hutchison claimed the No. 2 spot in the Jays rotation and will look to build on the fine start to his career that he showed us before blowing out his elbow. Just 23, this kid has plenty of upside.

5. Erik Johnson, Chicago White Sox: In drafts this spring, Johnson has going very late for a starter that could be the No. 3 hurler on the South side. Last year, split between Double-A and Triple-A, he went 12-3 with a 1.96 ERA, giving up 140 hits with 40 walks against 131 strikeouts in 142 IP, and he actually posted better numbers at the higher level, which is obviously a great sign. A 3.25 ERA over five late-season starts suggests he was far from overmatched in the bigs. Johnson’s success allowed the White Sox to move Hector Santiago in a three-team deal that landed them Adam Eaton.

6. Casey McGehee, 3B, Miami Marlins: Did McGehee learn anything while taking a one year break to ply his trade in Japan? The numbers (150 hits, including 30 doubles and 28 homers, in 144 games) seem to indicate he did, and the Marlins will give him every opportunity to prove it back in the majors, signing him to a one-year deal. McGehee was very productive in his year in Japan, but more noteworthy was the improvement he showed in his batting eye (70 walks against 119 strikeouts). Considering he walked a total of 74 times over two seasons and 864 at-bats before his Japanese adventure, maybe he did learn something.

7. Dioner Navarro, C, Toronto Blue Jays: Now that Navarro has moved to Toronto, the veteran backstop could surprise as a second catcher for your Fantasy team. Last year, in just 240 at-bats with the Cubs, he smoked 13 homers, and we all know how friendly the Rogers Centre is to power hitters.

8. Chris Owings, SS, Arizona Diamondbacks: Is Didi Gregorious the long-term answer? We don’t think so, and believe that Owings has a great chance to break camp as the D-Backs starting shortstop. Although Arizona management is insisting Gregorious is the favourite after last year, we wonder if he has the bat to get it done.

9. Marcus Semien, 2B/SS/3B, Chicago White Sox: Let’s face it, there could be opportunities in the White Sox infield this year, especially with long-time starting (and disappointing) second baseman Gordon Beckham nursing a strained oblique that quite possibly could see him starting the season on the DL. Third baseman Matt Davidson, acquired from Arizona in the Addison Reed deal this offseason, has been shipped off to Triple-A for more seasoning and Conor Gillaspie is far from a household name. Meanwhile, between Double-A and Triple-A last year, Semien racked up some impressive numbers (19 homers, 66 RBI, 24 thefts, .284 BA and 110 runs in 518 at-bats). A hot start could guarantee full-time employment for Semien.

10. Jonathan Villar, SS, Houston Astros: In 549 at-bats between Triple-A Oklahoma City and the majors, Villar swiped 49 bases last year. The biggest question will be his D or lack thereof, but given that his nearest competitor is Marwin Gonzalez, the job should be his. When you’re looking for speed options late in the draft, Villar should be near the top of your list Yes, he’s only keeping things warm for uber prospect Carlos Correa, but for now, Villar looks like a nice play.

Now it’s your turn. Let us know in the comments below who your favourite sleepers for 2014 are.

By RotoRob
Tags: Miguel Cabrera
This entry was posted on Friday, March 28th, 2014 at 3:51 pm and is filed under 2014 RotoRob MLB Draft Kit, BASEBALL, RotoRob, Sleepers, Tim McLeod. You can follow any responses to this entry through the RSS 2.0 feed. Both comments and pings are currently closed.