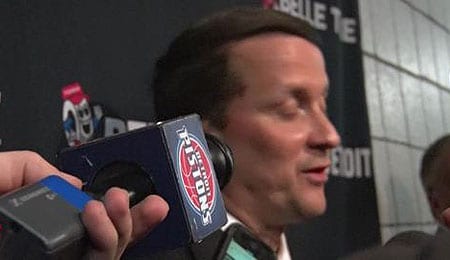 Poor John Loyer is stuck with a mic in his head and a crappy team to coach. (Detroitnews.com)

Less than two weeks ago, the Detroit Pistons were very much alive in the Eastern Conference playoff race. But five straight losses have dropped them to 11th in the conference, making a lottery pick much more likely than postseason action.

Of course, the fact that things have gone so badly in Motown yet the Pistons are still favoured by a point in the latest NBA betting lines for Monday’s game — which is on the road — speaks to how awful a year it’s been for the Utah Jazz.

While Detroit looks to avoid a season high tying sixth straight loss, the Jazz just put the brakes on a six-game skid of its own by barely beating woeful Orlando. Still, Utah is in a tight battle with the Lakers to avoid being the worst team in the Western Conference. It’s been a huge disappointment for a Jazz team that barely missed the playoffs last season, but will sit on the postseason sidelines for the third time in four seasons.

Further reasons that make it amazing Detroit is favoured in this game include the fact that the Pistons have dropped 13 straight road games (worst skid since losing 19 in a row in 1980-81) and that they have failed to win any of their last 10 games in Utah.

Interim coach John Loyer hasn’t exactly turned the team around since taking over for Maurice Cheeks, who was fired six weeks ago. Since then, Loyer has guided the Pistons to a 4-15 mark — all but ensuring a fifth straight season out of the playoff mix. Remember how excited he sounded when he took the job (see video below)? Uh, yeah. Smart money would be on Loyer looking for a new job this summer.

Detroit power forward Jonas Jerebko, who has been off our Fantasy radar since late last season, finally showed us a little something-something on Saturday. In a season-high 27 minutes, he got red hot from downtown (5-of-7) en route to a career high-tying 22 points with nine boards, two steals and two assists. It was a reminder of what the Swedish big is capable of, but he’s been buried on the bench all season and is unlikely to duplicate his strong finish of a season ago. Still, keep an eye on Jerbko’s PT on Monday and the rest of the week. If he can at least garner, say, 20 MPG, he’ll be worth a look in deeper formats. Besides, if Loyer has any designs on saving his job, he might want to stick with the hot hand. Just sayin’…

Utah PG Trey Burke, who received consideration as the 2014 RotoRob Fantasy Basketball Rookie of the Year, has had a pretty inconsistent freshman campaign. Still, we’re expecting the former Michigan star to again lay a beating on Detroit. The first time Burke faced he Pistons, he went off for 20 points and 12 assists, and it wouldn’t surprise us if he spent the rest of his career punishing Detroit for not drafting him.

Burke has shown a better touch from downtown lately, averaging two treys over the last five games, including the game-winner on Saturday vs. the Magic. He got to the line six times in that game — well above his season average, but hopefully the start of a trend that will help him become a more consistent scorer.

Now it’s your turn. Let us know in the comments below what you think will happen in this game.

By RotoRob
Tags: Detroit Pistons
This entry was posted on Monday, March 24th, 2014 at 1:13 pm and is filed under BASKETBALL, Game Preview, RotoRob. You can follow any responses to this entry through the RSS 2.0 feed. Both comments and pings are currently closed.