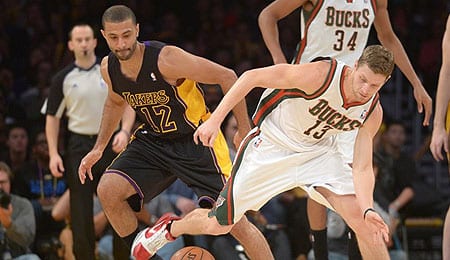 The Lakers’ backcourt of attrition is now led by Kendall Marshall (12). (Regrit.com)

Last week, RotoRob issued a unique challenge to us to also recommend players that can assist those participating in deeper leagues. These leagues typically consist of  more than 12 teams, with 16 roster spots or greater, so free agent findings can be slim in such formats. This week, a majority of our recommendations are based on this criteria as we kick off the New Year.

Kendall Marshall, PG, Los Angeles Lakers: Okay, last week we highly recommended acquiring Jordan Farmar. Oops. Sorry about that. How were we to know that he’d take to the court and re-injure his hamstring even worse this time around? With Farmar expected to miss four weeks or more, Coach Mike D’Antoni had no choice but to institute the “Marshall Plan,” which in this case meant handing the starting point guard job to a dude that only two weeks earlier was playing for the Delaware 87ers of the D-League. Marshall, the former Tar Heel and first round pick of the Phoenix Suns, made the most of his opportunity on Friday, scoring 20 points, dishing out 15 assists and hitting two treys with six boards. It remains to be seen whether this type of production will continue but the opportunity and playing time is there for the taking. Of course, we recommended Marshall in late-March when he finally got a shot to play some serious minutes in his rookie season for the Suns, but it wasn’t a great call, as his PT didn’t rise as much as we expected and had even fewer touches in April. This time, we’re more confident in his role, if for no other reason than the Lakers don’t have any other healthy options at the moment. Besides, it was nice to see Marshall give Tar Heel Nation some love in his post-game interview (see below).

Darren Collison, PG, Los Angeles Clippers: Like Marshall, Collison has a terrific opportunity in front of him because of the shoulder separation suffered by star guard Chris Paul on Friday. Coach Doc Rivers has already indicated that Paul is likely to miss at least 3-to-5 weeks. Enter Collison, who has experienced brilliant Fantasy moments while a member of both the New Orleans Pelicans and Indiana Pacers. Now the point guard position is all his for the next several weeks and owners will certainly reap the dividends.

Luke Ridnour, PG/SG, Milwaukee Bucks: Coach Larry Drew certainly leads the league in lineup changes and Ridnour is flying “under the radar” right now. Less than one per cent owned in ESPN leagues, Ridnour has a chance to stick in the starting unit for Fear The Dear (Bucks). He statistically does a little bit of everything well (scoring, assists, treys, shooting percentages) and may actually surpass the assist totals of backcourt mate Brandon Knight. By the way, Knight has evolved into a scoring machine for Milwaukee and should mold well with Ridnour as his backcourt mate.

Ramon Sessions, PG, Charlotte Bobcats: At a mere two per cent ownership rate, Sessions can help your team in the way of points, assists and steals. Over his last several games, he’s averaging 11.3 points, 3.3 assists and one steal as the key man off the bench for the Bobcats. It seems every season Sessions is overlooked, yet is valuable for those participating in deep leagues.

Trevor Booker, PF, Washington Wizards: Booker has made the most of his new role as the Wizards starting power forward. He’s averaging nine points and 11 boards and is shooting .526 from the field over his last five contests, including a 10-point, 19-rebound performance on New Year’s Day versus Dallas. At slightly less than three per cent owned in ESPN leagues, Booker is a widely available player capable of providing great value.

Iman Shumpert, SG/SF, New York Knicks: Are the last two games a mirage or is Shumpert going to become a prominent piece of the Knicks offensive attack? In back-to-back road games with the Spurs and Rockets this week, Shumpert registered 27 and 26 points respectively, including six treys in each game. On top of that, Shumpert has always been a steal machine with rebounding skills. If this offensive production continues, Shumpert can be a huge Fantasy factor, so he’s worth a speculative pick to see how this plays out.

Andrei Kirilenko, SF, Brooklyn Nets: Not a week goes by when we don’t recommend the Brooklyn Nets’ “flavour of the week.” This time around it’s Russian veteran Kirilenko who recently returned from a back injury. AK-47 has always been a valuable Fantasy performer, especially while playing for the Utah Jazz, and only needs sufficient playing time to make that happen in Brooklyn.

Corey Brewer, SF, Minnesota Timberwolves: Like the aforementioned Sessions, Brewer is another player that contributes in the way of points (including threes), assists and steals, yet is overlooked. While Brewer will never be a Fantasy star, his production in several categories will only benefit your squad.

Ed Davis, C/PF, Memphis Grizzlies: At less than one per cent owned in ESPN leagues, Davis represents the best centre value on the board for those in deep leagues. Over his last five outings, he’s averaged 11.5 points (.643 FG percentage), 4.5 boards and 1.5 steals. The former North Carolina standout (it’s Tar Heel Alumni week!) has the ability and potential to improve as the season progresses.

Tyler Zeller, Cleveland Cavaliers: With the Andrew Bynum experiment now doomed in Cleveland, Zeller (another former UNC boy) will see productive minutes at centre behind the always fragile Anderson Varejao. We wouldn’t get overly excited about Zeller just yet, but he’s capable of being a contributor especially if Sideshow Bob experiences further injury problems — which is highly likely now that his minutes are almost back up to pre-Bynum levels.

Boris Diaw, C/PF, San Antonio Spurs: If your team was in need of a centre and your research uncovered an available player that had done the following over the last 15 games: 8.4 points, 4.1 rebounds, 3.4 assists, .595 FG percentage, .818 FT percentage, we think you might be inclined to take a flier. Those stats reflect the performance of Diaw, who at less than three per cent owned (ESPN leagues) can be useful despite the lack of love he gets in Fantasy circles.

Now it’s your turn. Let us know in the comments below who your favourite Fantasy basketball waiver wire pickup of the week is.

By Bob Raymond
Tags: Kendall Marshall, Los Angeles Lakers
This entry was posted on Saturday, January 4th, 2014 at 4:07 pm and is filed under BASKETBALL, Bob Raymond, The Wire Troll. You can follow any responses to this entry through the RSS 2.0 feed. Both comments and pings are currently closed.