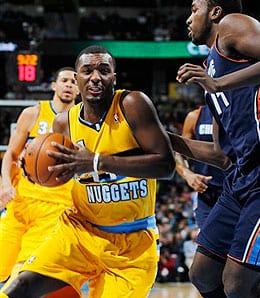 As we prepare to celebrate the New Year, let’s focus on several players who can help improve or even turn your season around during 2014. Not only do we hope you sip some champagne to celebrate a Happy New Year, but also to celebrate a Fantasy NBA crown come April.

Jordan Farmar, PG, Los Angeles Lakers: He’s back! After suffering a hamstring injury several weeks ago, Farmar has returned to the Lakers’ starting lineup. With Steve Blake (elbow), Kobe Bryant (knee) and Steve Nash (back) all sidelined indefinitely, Farmar has a terrific opportunity to register impressive statistics from the point guard position. On Friday against Utah, he compiled 16 points, seven assists, seven rebounds and three steals. Make it mandatory to acquire Farmar immediately.

Jordan Hamilton, SG, Denver Nuggets: On Friday against New Orleans, Hamilton was promoted to the starting lineup at the two and he responded with 12 points, seven rebounds and a block. He should get a long look as the Nuggets have been disappointed with the play of previous starter Randy Foye and Evan Fournier. Don’t discount Hamilton’s ability to shoot the three-ball either and he knows how to win over the fans, as you can see in the video below.

Jeremy Lamb, SG, Oklahoma City Thunder: With Russell Westbrook undergoing yet another knee operation and expected to be sidelined for 6-to-8 weeks, Lamb has an excellent opportunity. Reggie Jackson will assume the starting point guard duties while Lamb will gain additional minutes as the sixth man for the Thunder. Lamb was drafted for his scoring prowess and the next several weeks will determine his future value.

Mario Chalmers, PG, Miami Heat: We profiled Chalmers way back at the beginning of the season, yet his ownership remains under 50 per cent. During his last seven contests, he has averaged over 10 points, six assists, two steals and one trey. Adding more fuel to his value is Dwayne Wade’s nagging knee soreness. With Flash currently unable to participate in back-to-back games, Chalmers has a bigger opportunity to contribute.

Gerald Green, SF/SG, Phoenix Suns: If your team is in need of scoring and threes, then don’t hesitate to acquire Green ASAP. He has been on a tear from downtown, nailing 17 treys over his last four games. Getting over 25 minutes per game on a regular basis from Coach Jeff Hornacek seems to be what the doctor ordered for talented swingman Green.

Mirza Teletovic, PF, Brooklyn Nets: With the numerous problems encountered by the Nets, Teletovic has emerged as a bright spot in recent games. Seeing substantial playing time, he has responded with an average of 15 points, four boards and three treys over his last four outings. Teletovic can also block shots, which only enhances his Fantasy value.

James Johnson, SF, Memphis Grizzlies: Signed out of the D-League, former Raptor and Kings forward Johnson is unique in that he rebounds, steals and blocks shots. Not the most talented offensive player, he is capable of knocking down the three-ball, but will struggle to score points on a consistent basis.

Ersan Ilyasova, SF/PF, Milwaukee Bucks: Every season there are players you just can’t give up on. For us, one such dude is talented Turkish forward Ilyasova. Unable to get fully healthy from a preseason ankle ailment, he was rested, healed and brought back as a member of the starting five on Friday. After averaging 13 points and seven rebounds last year, Ilyasova is worth a continued look.

Kevin Garnett, C/PF, Brooklyn Nets: If the future Hall Of Famer is ever going to produce substantially for the Nets, now is the time. With Brook Lopez out for the season (foot fracture), Garnett is expected to receive additional playing time and offensive touches. There isn’t any guarantee he’ll show marked improvement, but he’s certainly worth keeping an eye on. Come on… he’s still KG, after all.

Jordan Hill, C/PF, Los Angeles Lakers: Hill has been a roller coaster for his Fantasy owners this season. His production has been inconsistent, resulting in Coach Mike D’Antoni shuffling him in and out of the starting lineup. Recently, Hill has been on an upswing and bears consideration with his scoring and rebounding ability. The fragile nature of frontcourt teammate Pau Gasol is also a plus for Hill’s owners.

Timofey Mozgov, Denver Nuggets: Mozgov is another player we highlighted earlier in the season who has come into prominence. He was promoted to the starting unit three games ago and since then he’s registered 12 points, 10 boards and one block per contest. If Mozgov remains the centre of choice in Denver, grab him.

Now it’s your turn. Who’s your favourite Fantasy basketball waiver wire pick of the week? Let us know in the comments below.

By Bob Raymond
Tags: Jordan Farmar
This entry was posted on Saturday, December 28th, 2013 at 5:31 pm and is filed under BASKETBALL, Bob Raymond, The Wire Troll. You can follow any responses to this entry through the RSS 2.0 feed. Both comments and pings are currently closed.