The Wire Troll: The Return of Andre Drummond 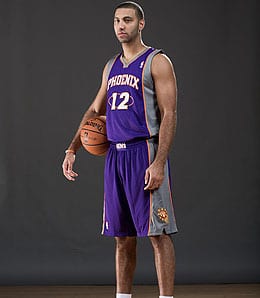 Kendall Marshall is finally getting a chance to shine for the Suns.

It’s nearly April, so it’s do-or-die time, people. Fantasy championships will be won or lost over the next couple of weeks.

This week, Marc Gasol returned just in time to help you for your Fantasy playoffs; the Bulls (even without Joakim Noah and Marco Belinelli) finally did what no one has been able to do since before the Super Bowl — beat the Heat; and Pat Riley blew a gasket and told Danny Ainge to “shut the fuck up.”

Kendall Marshall, PG, Phoenix Suns: Drafted as part of a succession plan to Steve Nash, Marshall is suddenly getting burn because for some reason Phoenix Coach Lindsey Hunter is opting to rest Goran Dragic. Marshall has responded with back-to-back double-digit assist games. Still, this is as short-term a pickup as it gets, folks. Dragic is healthy and his benching is causing some unrest in the Suns’ locker room, so expect this situation to come to a head shortly. In the meantime, if you need cheap dimes, Marshall’s your man.

Mike James, PG, Dallas Mavericks: Wow, we’re really digging up some golden oldies of late. The last time James held any Fantasy value was around two and a half years ago when he was a key bench part for the Wizards. The 37-year-old guard — that’s bounced around like a cheap ho — has been starting for the Mavs, and they managed to win nine of their first 12 games with him in the starting lineup to get back into the playoff race. James turned in a stinker Thursday (going scoreless, yet still dropping four dimes and getting a steal), but he’s still scoring nearly 10 points with 5.6 assists per game over the past five.

Jimmy Butler, SG/SF, Chicago Bulls: With Belinelli out, Butler is getting burn again and the sophomore swingman is really taking a step forward.

Dorell Wright, SG/SF, Philadelphia 76ers: Wright enjoyed a huge game Sunday and followed that up as a key cog in a big fourth-quarter run Wednesday as the Sixers have started to win a few games.

Keith Bogans, SF, Brooklyn Nets: Yet another player that’s been off the Fantasy radar for over two years, Bogans has been starting for Joe Johnson (heel/quad) and generally getting it done (although Friday was pretty ugly). If you’re in a very deep league and need treys, Bogans looks like a decent short-term option while JJ is ailing.

John Salmons, SF, Sacramento Kings: Last month, we erroneously assumed that Salmons would stop taking minutes away from Marcus Thornton on the going-nowhere Kings. However, the 10-year veteran Salmons just won’t go away and last weekend he showed signs of life (although his shooting slump has since returned). Still, he’s assumed a leadership role on this young team and is averaging a robust 36 MPG over the past five, giving him a chance to supply low-level numbers across the board.

Wesley Johnson, SF, Phoenix Suns: Johnson is suddenly getting touches galore (15.4 per game over the past five) in Phoenix.

Andre Drummond, Detroit Pistons: Drummond (tailbone) finally returned Friday — making his first career start, to boot. The 19-year-old rook has a four-game week upcoming and while his minutes were limited in his first game back (19), there was nothing wrong with his shooting touch (8-for-10), helping him score 17 points with two blocks and two steals. Reports suggest Drummond will not be on a minutes restriction for the rest of the season, so if you need big man help, this kid could be just what you seek.

Kyle O’Quinn, Orlando Magic: Who? I know. The Magic lineup has spurned a lot of “who the hell is that” moments this season, and O’Quinn is the latest. On Wednesday, he went off for a career-high 23 points (11-for-14 from the field), 11 boards and six assists (against Charlotte, so don’t go crazy) thanks to extra PT with Nikola Vucevic out with a concussion. O’Quinn’s effort Friday was much more modest, although he did block a pair, so consider a flier on him while Vucevic is sidelined.

Boris Diaw, San Antonio Spurs: This is a deep league special only, but Sunday Diaw showed what he can do with 10 points, two treys, a couple of blocks and a steal.

Elton Brand, PF/C, Dallas Mavericks: Brand’s PT has plummeted the past two seasons, yet he remains a decent source of boards, blocks and steals.

By RotoRob
Tags: Marc Gasol
This entry was posted on Saturday, March 30th, 2013 at 2:09 pm and is filed under BASKETBALL, RotoRob, The Wire Troll. You can follow any responses to this entry through the RSS 2.0 feed. Both comments and pings are currently closed.