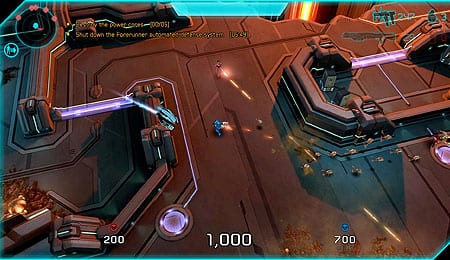 Red and blue… on the same side?! What madness is this?

Although Nintendo and Sony have mascots, neither of them is as singularly associated with any series as Microsoft is with Halo. Like any long-running franchise, Halo has its detractors, but by most objective measures it has been a smashing success in terms of both sales and quality. New to the series is Halo: Spartan Assault, which was originally released earlier in 2013 on the Windows Phone and PC, and has now found its way to the Xbox One.

Having played on both the touch-screen phone and keyboard-and-mouse PC versions, we can scarcely put into words how good it is to have a controller in our hands again. Spartan Assault is played from a top-down perspective as a twin-stick shooter in which you move with the left and aim with the right. There is no beam or line to indicate the flight of your bullets. This can be an issue now and then, particularly when ammo is scarce, but for the most part it feels very responsive and accurate.

Tossing grenades (done via the left trigger) isn’t quite as clean. Instead of a true arc, the game seems to anticipate where you want the grenade to go. Typically it properly identifies your intended target with ease. This isn’t always the case, however, and there are times when your grenades will detonate on a turret instead of a group of Covenant or something equally annoying.

Switching weapons, interacting with objects and activating armour abilities are all well implemented, and the act of driving (and hijacking) vehicles retains the signature Halo feel. The game also features the use of the Xbox One’s “impulse triggers,” which provide a nice warning when a weapon is about to overheat in the form of some serious vibration.

Visually, everything in Spartan Assault looks like it belongs in the Halo universe. Spartans, Covenant, weapons, vehicles and locations are all spot on, and that allows a game that’s well outside the range of traditional Halo titles to remain grounded in the lore. The level structure and location variety leave a little to be desired, and obviously as a port of a game originally designed to be played on phones you’re not going to be blown away, but it’s generally colourful and enjoyable.

As with the sights, the sounds are all vintage Halo. Weapon fire and explosions are instantly familiar, and the soundtrack delivers as well. There’s some sparse voice acting during mission movies and occasional in-game orders, but it’s not enough to register as being good or bad. It’s just there.

There isn’t much of a story in Spartan Assault, though Halo 4’s Sarah Palmer appears to give it some grounding in the timeline. Mostly it’s just a series of historical ops to be used by aspiring Spartans (like you) as training simulations. The campaign consists of six operations with five missions a piece — that’s a total of 30 for those that aren’t mathematically inclined. Each one is fairly short and must be completed in one go, meaning if you die you’re sent back to the start. It’s a setup that made lots of sense on mobile devices, but on a home console it feels kind of choppy.

While objectives for the various missions change, your goal remains constant: score as many points as possible. Each mission begins with a loadout screen with a primary/secondary weapon, armour ability and booster. You’ll get default selections for the first three while the last one is empty. To make changes you’ll need to “buy” upgraded items, either with real-world currency (credits) or by cashing in the experience you’ve earned from completed missions.

To be clear, you should have no trouble finishing levels with default gear. Still, much like the bite-sized mission structure, the pay-to-boost system feels out of place. Given how small in scope each of these encounters are it seems like just giving people the ability to try different loadouts would have been a nice way to extend the experience. Instead you either go with what you’re given or dip into your pockets (real or virtual).

Unique to the Xbox One version is a series of five co-op missions featuring everyone’s favourite enemy, the flood. These missions are timed, requiring you to hold a point or complete some objective until (or before) the timer reaches zero. They’re definitely frenetic, building from slow starts to chaotic finishes, though they feel more like an extension of Firefight than a truly co-operative experience.

Speaking of which, there are two factors that really hurt Spartan Assault: (a) There’s no co-op play on the campaign; and (b) There’s no couch co-op, period. Those are terrible omissions. Co-op is an integral part of Halo — much more so than other shooter heavyweights like Call of Duty and Battlefield — and to not be able to plunk down with a buddy and play the campaign (or at least the flood-based co-op missions) locally makes no sense. Without it, Spartan Assault becomes something you do in between longer sessions… think of it like gaming ginger, used to cleanse the palette.

There is a varying price point to be aware of. Those that picked it up on the Windows Phone and/or Windows 8 can download the game for US$5, at which point it’s a no brainer as this is by far the best version. If you’ve never played it before, Spartan Assault checks in at US$15, which is less of a slam dunk as that’s more than double the cost of previous versions with only slightly more content.

While no doubt the weakest entrant in the series, Halo: Spartan Assault is largely enjoyable in small or even moderate doses. It’s not built for longer sessions, though, and the presence of pay-to-boost items and lack of local/campaign co-op are low points. Here’s hoping a future patch adds those features, and maybe some DLC missions as well.

By Herija Green
Tags: Nintendo
This entry was posted on Friday, January 3rd, 2014 at 4:25 pm and is filed under Herija Green, Video Game Reviews. You can follow any responses to this entry through the RSS 2.0 feed. Both comments and pings are currently closed.