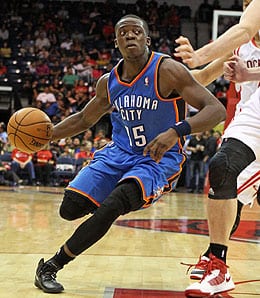 Reggie Jackson has become a force off the Thunder pine.

No matter the sport, experts will tell you that strong team bench play is essential to winning a championship. In the world of NBA basketball, that has certainly proven to be the case. In this edition of The Wire Troll, we have identified several “reserve” players that can make a difference on your Fantasy team. Not to be denied, we’ve also spotted several “starting five” participants that are rapidly developing.

Reggie Jackson, PG, Oklahoma City Thunder: Jackson is a player we were high on in the preseason. Over the last several games, he’s been the key player off the Thunder bench while playing both guard positions. Jackson has comparable numbers to several starting point guards in the league while playing nearly 30 minutes per game over his last six. With Kevin Martin departed (Minnesota) and Jeremy Lamb still developing for OKC, Jackson is a must own and will be a candidate Sixth Man of the Year honours. Hell, he’s even being used by his own teammates as a slingshot to getting post position (see video below)!

Nick Young, SG/SF, Los Angeles Lakers: One thing that can be said about Young is that the man can score. He is the type of player that runs hot and cold, but when he gets in a “zone,” he’s a very valuable bench scorer. The Lakers have witnessed that as of late with Young scoring 17 points per game, including two treys and two steals over his last six outings. He should remain a valuable reserve even with the pending return of Kobe Bryant.

Ben McLemore, SG, Sacramento Kings: We at RotoRob.com have been anxiously awaiting the potential of McLemore to display itself and it appears that time has arrived! The former University of Kansas standout was the seventh overall selection in the 2013 draft and was highly touted by NBA great LeBron James on draft day (via Twitter message shared on the ESPN draft telecast). On Friday versus the Lakers, McLemore registered 20 points, six rebounds and two thefts. The consistency is starting to come and your team will be the beneficiary.

Brandon Bass, PF, Boston Celtics: Bass has become a consistent performer for the Shamrocks, part of a rotation of frontcourt players used by rookie coach Brad Stevens. Bass is averaging 11.2 points and nearly six boards per game with advantageous field goal (47) and free throw (89) percentages. However, what really draws us to recommend him is the two blocks per game he has registered over his last seven contests. With quality players that contribute blocks hard to find, don’t sleep on Bass, or you may find your team sleeping with the fishes.

Taj Gibson, PF, Chicago Bulls: Gibson has been the ultimate bench performer over his last four outings, registering 21 points, eight rebounds and nearly two blocks per game. As the only productive “big” off the Bulls bench, he has the potential to become a valuable Fantasy asset if he can remain consistent. Also, Joakim Noah hasn’t been the healthiest of players in recent years, giving further merit to Gibson.

Khris Middleton, SF, Milwaukee Bucks: While Brandon Knight was seen as the key player acquired from Detroit in the Brandon Jennings trade, it may be Middleton who becomes the prize acquisition for the Bucks. In just his second season, Middleton is showing an impressive scoring touch including the ability to knock down three pointers. Facing Washington on Friday, he scored 29 points (helped by four treys) to go along with seven boards and two steals. Milwaukee’s frontcourt is having trouble staying healthy, so Middleton is making the most of his opportunity.

Jeff Taylor, SF, Charlotte Bobcats: When Michael Kidd-Gilchrist suffered a broken wrist earlier this week, it opened the door for Taylor to become a key member of the Bobcats starting unit. In his first start at small forward on Friday, Taylor responded nicely with 20 points, eight boards and one steal. MKG is expected to miss six-to-eight weeks, so grab Taylor immediately.

Timofey Mozgov, C, Denver Nuggets: While Mozgov certainly isn’t going to win any scoring titles, he has shown tremendous rebounding and shot blocking ability as of late. Coming off the Nuggets bench, he’s had games of 20 and 15 boards, respectively, with the blocks to accompany.

Amir Johnson, PF/C, Toronto Raptors: We mention Johnson because he appears to be emerging from an early season slump. Recently demoted to the bench, he has responded with a couple of solid performances. Johnson has had Fantasy value in the past and has now fallen below the 50 per cent ownership level. Keep an eye on him.

Kosta Koufos, PF/C, Memphis Grizzlies: Kudos to my colleague RotoRob for recommending Koufos a couple of weeks back. We include Koufos again because he should be owned in all leagues until Marc Gasol returns from injury. Koufos has actually played above and beyond expectations since joining the starting lineup, averaging a double-double with over two blocks and one steal. Get him now!

By Bob Raymond
Tags: Reggie Jackson
This entry was posted on Saturday, December 7th, 2013 at 4:35 pm and is filed under BASKETBALL, Bob Raymond, The Wire Troll. You can follow any responses to this entry through the RSS 2.0 feed. Both comments and pings are currently closed.

One Response to “The Wire Troll: Reggie Jackson, Mr. December?”