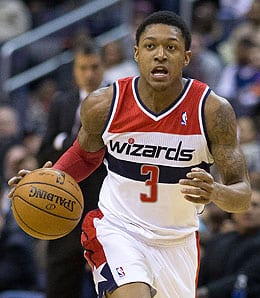 Bradley Beal is on the cusp of something very special.

The 2013-14 RotoRob NBA Draft Kit draws to a close today with our final Top 10 list. So while you wonder how long Danny Granger’s latest injury will keep him out (thereby lending credence to one of our picks below), let’s examine the top 10 sleepers for the 2013-14 Fantasy basketball season.

Finally, we have everyone’s favourite – sleepers! Who doesn’t love to get in on the ground floor of an up and coming player that’s bursting to break out? Identifying enough of these types of players is a sure fire recipe for winning.

1. Bradley Beal, SG, Washington Wizards: Beal’s development is one of the keys to the Wizards bouncing back this season. Seventh in our Shooting Guard Rankings, this potential superstar averaged 16.5 points and 2.1 treys per game after the break in his rookie season in 2012-13. Don’t be shocked if Beal averages 20 PPG as a soph. He has nice size for a two-guard and a really sweet shooting stroke as you can see in the video below.

2. Lance Stephenson, SG, Indiana Pacers: We’re expecting to see a more mature Stephenson this season, and that could really translate into a more consistent and productive player. He’ll be the starting two-guard with injury prone Danny Granger out yet again and there’s no guarantee that Granger will get the job back if and when he ever gets healthy.

3. Kawhi Leonard, SF, San Antonio Spurs: After Leonard took a massive step forward last season as a sophomore, we’re expecting even more this season – especially on offense. Want a sense of his impending surge? Take a look at Leonard’s playoff numbers last season – 13.5 points, 9.0 rebounds and 1.8 steals with a superb 54.5 FG percentage. He brings a professionalism to the court that ensures the great Spur run over the past 15 years will continue even after the current stars are gone.

4. Eric Bledsoe, PG/SG, Phoenix Suns: Acquired in a summer trade, Bledsoe represents the key to Phoenix’s future, but we’re confident he can be a serious asset this season – especially with news that he’s going to start alongside PG Goran Dragic. Bledsoe is a very good rebounder for a small guard, so his ability to put up those across-the-board stat lines really excites us.

5. Derrick Favors, PF, Utah Jazz: No more Al Jefferson and Paul Millsap = big time opportunity for 22-year-old Favors, who has long been a potential stud. He’ll need to improve his FG percentage to really break out, but at least we know he’s going to the minutes to have a shot. The Jazz recently extended Favors, further suggesting he’s a vital part of its future.

6. Harrison Barnes, SF, Golden St. Warriors: Barnes was a starter as a rookie last season, but he could occasionally come off the bench this season with the addition of Andre Iguodala. What really impressed us about Barnes was how much he stepped up in the playoffs, averaging 16.1 points, 6.4 boards and 1.6 treys per game. He’s about to show us why he went seventh overall in last year’s draft.

7. Jonas Valanciunas, C, Toronto Raptors: The seven-foot Lithuanian has looked strong this fall after a solid rookie campaign last season. He’ll need to stay healthy to take it to the next level, but we’re confident he’s on the cusp of a long and fruitful run as the centre of the Raptors.

8. Roy Hibbert, C, Indiana Pacers: Hibbert is yet another one of our sleepers that enjoyed his coming out party in the playoffs, averaging an eye-popping 17 points and 9.9 boards while shooting 51.1 from the field. Indy has plenty of frontcourt scoring options, but this dude looked like a stud in the Eastern Conference Finals last season, and we’re banking on seeing plenty more of that this season.

9. Dion Waiters, SG, Cleveland Cavaliers: Waiters looked inconsistent in his rookie campaign last season, but in fairness, he missed 21 games with injuries and backcourt mate Kyrie Irving also missed plenty of time, so the two didn’t have as much of a chance to gel as the Cavs would have liked. Waiters was far more efficient in the second half, doing more in less PT. As the fourth overall pick in last year’s draft, he’s going to get plenty of rope to prove he’s a starting two-guard in the NBA and you can count us among those who believe he’s going to do so.

10. Tobias Harris, SF/PF, Orlando Magic: Harris is a versatile player who proved he’s capable of filling the stat sheet after he was sent to Orlando from Milwaukee halfway through last season. What he did for the Magic was accomplished in relative obscurity over a span of less than 30 games, so there’s plenty of hope he’ll remain under the radar. Harris is still just 21 yet has already shown impressive scoring, rebounding and blocking ability.

Okay, now it’s your turn. In the comments below, tell us who your favourite sleeper is this season.

By RotoRob
This entry was posted on Monday, October 28th, 2013 at 3:13 pm and is filed under 2013-14 RotoRob NBA Draft Kit, BASKETBALL, RotoRob, Sleepers. You can follow any responses to this entry through the RSS 2.0 feed. Both comments and pings are currently closed.