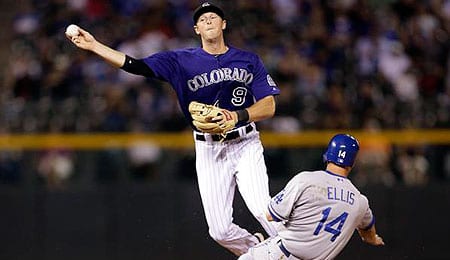 D.J. LeMahieu was one of the best waiver wire picks at the keystone corner.

It’s time to give those outstanding hidden gems their due accolades. Many winning Fantasy baseball teams will be proudly laying claim to owning at least some of this rather illustrious group in 2013.

Wilson Ramos, Washington Nationals: After a dreadful first half in which he spent more than two months on the DL dealing with a gimpy hamstring, Ramos has taken his game to a new level in the second half. Solid performances in both July and August have been followed up by a September in which he’s exploded — bashing six homers with 23 RBI. He’s played a huge role in Washington’s late-season surge and has the potential to be a force at his position for many years to come. Let’s just hope he can avoid fielding misadventures like the web gem in the video below.

Adam Lind, Toronto Blue Jays: Lind still can’t hit southpaws worth a lick, but absolutely feasted on righties in 2013. He’s currently amassed 23 long balls and 64 RBI with a .286 BA in 448 at-bats. It will be very interesting to see if the Jays exercise their $7 million option on him for 2014.

Brian Dozier, Minnesota Twins: In a rather weak year for middle-infielders, Dozier was one of the few bright spots. Buoyed by a strong August in which he hit six homers while driving in 20 runs, he moved to the top of the class as far second basemen that could be had off the wire. Dozier is now up to 17 homers on the year. Did anyone see that coming?

Josh Donaldson, Oakland Athletics: Donaldson got out of the gate strong and simply didn’t slow down. He’s currently up to 24 homers with 91 RBI and a stellar .388 OBP. Donaldson took a position that was a huge question mark in Oakland for the past couple of years and really solidified it.

Jonathan Villar, Houston Astros: Villar proved to be a great addition in the second half and in a close race with our first half winner, Jose Iglesias, gets the nod. Villar’s 17 thefts in only 180 at-bats were huge for those looking to gain ground in the stolen base category.

Yasiel Puig, Los Angeles Dodgers: The Puig-mania that we saw in June had to slow down but nonetheless, he was a consistent force over the summer and is back on a tear in September. We saw moments of youthful exuberance (read: immaturity) and brilliant play in his debut season but the combination of Puig getting the call and the return of Hanley Ramirez were the two biggest factors in the Dodgers’ huge turn around and eventual victory in the NL West.

Leonys Martin, Texas Rangers: Martin struggled early, found his form in June, and despite a rather inconsistent rookie campaign found a way to slug eight homers and steal 33 bases. He could always run, but this year he learned how to steal bases and he took full advantage of his new skill. Martin should be a fixture in the Rangers lineup for many years to come.

Eric Young Jr., New York Mets: The Mets took a flier and acquired Young in mid-June and he immediately paid dividends. In 339 at-bats he’s scored 47 runs (mainly hitting out of the leadoff slot) and stolen an amazing 32 bases. Young has fully taken advantage of his chance to be an everyday player.

Jose Fernandez, Miami Marlins: In a rather surprising move, the Marlins promoted Fernandez straight from High-A and we think it’s safe to say they didn’t overextend him as he emerged as one of the brightest young stars in the game. Before being shut down in early September, in 172 2/3 IP Fernandez struck out 187, allowed only 111 hits, and posted an off-the-charts 2.19 ERA. Not too shabby for a pitcher that didn’t turn 21 until July 31. Meet the 2013 NL ROY.

John Lackey, Boston Red Sox: A huge question mark entering 2013, Lackey has wound up being a huge factor in the Red Sox returning to the top of the AL East. Considered a total bust after his first three years in Boston, his current 3.44 ERA leaves him tied for the second best ERA of his career, last accomplished a decade ago. Lackey’s season should warrant serious consideration for the AL Comeback Player of the Year award.

Patrick Corbin, Arizona Diamondbacks: Corbin has struggled a bit down the stretch, but overall it has been an amazing season for the 24-year-old southpaw. He’s now up to 14 wins and has posted a stellar 3.17 ERA. Entering the season, he was owned in only 16 per cent of CBS Leagues and if you gambled on him early, the rewards have been huge.

Bartolo Colon, Oakland Athletics: Absolutely incredible is the only way to describe the season we’ve witnessed from Colon. He’s currently sitting at 17 wins with a 2.64 ERA. In September he’s reeled off three wins in four starts and allowed only two earned runs in 25 IP to lead the A’s to the AL West title.

Francisco Liriano, Pittsburgh Pirates: Liriano was coming off a run of four consecutive seasons with an ERA in excess of five. What does 2013 bring? Sixteen wins and a sparkling 2.88 ERA. One of the finest seasons of Liriano’s career couldn’t have come at a better time for long-suffering Pirates fans.

Koji Uehara, Boston Red Sox: What an incredible run for the former Yomiuri Giants ace. Uehara was given the opportunity to close at the end of June after lost both Joel Hanrahan and Andrew Bailey got hurt, and he turned into gold for the BoSox. From June 30 to September 13, Uehara allowed no earned runs. From August 21 to September 13, he pitched 12 consecutive innings of perfect ball with 17 strikeouts. Simply amazing.

Edward Mujica, St. Louis Cardinals: Even though a few chinks in the armour have started surfacing in September (probably from overwork), Mujica and enjoyed an amazing run after taking over the closer job in mid-April. Getting 37 saves from an early-season wire pickup was a difference maker in many Fantasy leagues this season.

Now’s your chance to sound off. Who was your favourite wire pickup of the year? Let us know in the comments below.

By Tim McLeod
Tags: Wilson Ramos
This entry was posted on Wednesday, September 25th, 2013 at 12:36 pm and is filed under BASEBALL, The Wire Troll, Tim McLeod. You can follow any responses to this entry through the RSS 2.0 feed. Both comments and pings are currently closed.