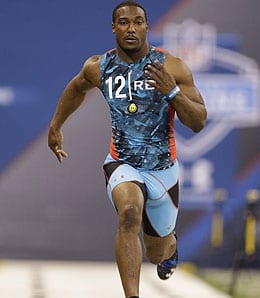 Each and every week of the NFL season, some random players emerge from depth charts and make an impact. When this happens fodder is produced for Fantasy dorks to debate over.

And now we present to you the NFL Wire Troll for Week Four.

Jake Locker, Tennessee Titans: The hard fightin’ Titans are 2-1 with an overtime loss to the highly touted Texans being the only blemish. Locker took a lot of heat this offseason — make the team a winner or you are gone was essentially the message. This season Locker has been sacked seven times and he was sub-par the first two weeks throwing for a combined 273 yards and two touchdowns against the Steelers and Texans. Against Pittsburgh, Locker was manhandled (see video below). In Week Three, however, he threw for 299 yards and a touchdown and also scrambled for 68 rushing yards and another touchdown. While rushing the ball is not Locker’s forte, he certainly is capable of making things happen. His Titans host the Jets this Sunday and Aaron Rodgers or Cam Newton owners can do worse as a bye week replacement.

Johnathan Franklin, Green Bay Packers: His 100-yard game Sunday will cause some owners to overreact. Just remember he was essentially number four on the depth chart at one point. Also Eddie Lacy and James Starks have the bye week to recover and don’t forget Franklin had zero touches before Week Three. We do believe Franklin is the best pass catcher among the group, but we suggest you keep things in perspective. Remember that things didn’t end on good note for him as his fumble cost the Packers the game.

Brandon Bolden, New England Patriots: Bolden made his case Sunday against the Bucs, gaining 100 yards on just eight touches (five receptions). With Shane Vereen out, the Pats need a pass catching RB to fill his void. Bolden, who caught 76 passes for 807 yards in college, can be that guy.

Donnie Avery, Kansas City Chiefs: The Avery talk has been swirling since seven catches for 141 yards against Eagles on Thursday. After all, he only had four receptions for 49 yards in the first two games combined. Was this a flash in the pan? In May, Avery ranked fifth in our Top 10 Fantasy Steals, so, yes, we believe in him.

Nate Washington, Tennessee Titans: Washington made the most of his 10 targets in Week Three, pulling in eight receptions for 131 yards. When a player receives double-digit targets in one game you must take notice. Washington had seven receptions on 12 targets through the first two weeks, so he is definitely peaking and those that own any of the Packers trio (Jordy Nelson, James Jones or Randall Cobb) will need to consider Washington. If you own the Carolina’s Steve Smith (14 receptions, 143 yards and one TD), you should know that Washington can be brought in for weekly consideration.

Charles Clay, Miami Dolphins: Dustin Keller? Whatever! Clay is listed as a tight end, but he is actually a halfback. With Keller lost for the season, Clay has come on and delivered. Clay gained over 3,400 yards as a college running back and so far this season has 19 catches for 203 yards. He also scored on one-yard touchdown run. Clay’s ball-carrying skills and 6’ 3” 255-pound frame leaves little reason for him to ever not be on the field for the Dolphins.

By Josh Johnson
This entry was posted on Tuesday, September 24th, 2013 at 12:30 pm and is filed under FOOTBALL, Josh Johnson, The Wire Troll. You can follow any responses to this entry through the RSS 2.0 feed. Both comments and pings are currently closed.