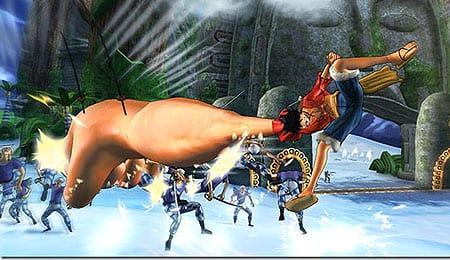 [Editor’s note: This is Matthew Stiplen’s first article for RotoRob.com. Please join me in welcoming him to the site.]

Are you a huge fan of the One Piece franchise? Love the Dynasty Warriors series? If you answered “yes” to either of those, One Piece: Pirate Warriors 2 is the game for you. If you said “no,” however, you may want to look elsewhere. This game drops you straight into the crazy, over-the-top world of One Piece, and if you’re unfamiliar with the series, it may only serve to confuse you.

The controls are a little odd. The game plays very fluidly for the most part and enables the player to effortlessly chain attacks. That being said, most of the game can be completed by simply button mashing. Each character has a series of different attacks, though none of them matter much because mashing achieves virtually the same effect as precise play. Plus, since only two basic attack buttons exist, combos consist of long, seemingly random sequences of those two buttons.

One of the best parts of One Piece: Pirate Warriors 2 is how closely the CG graphics match the original animation of the TV series. However, the very smooth 3D character bodies look slightly strange when paired with the 2D eyes. Another problem I had with the graphics is the over sexualization of the female characters. I realize the character model designer stayed true to the anime, but some of the cut scenes were gratuitous. The opening cut scene itself contains a huge close up of Nami’s chest — blatant objectification that serves no one.

True One Piece fans will be happy to know the game features all the real Japanese voice actors from the show. Whether or not you like the voices simply comes down to how much you like the show. One of the downsides to this is the fact that the player will be forced to read huge amounts of text during battle. Crucial instructions will often be delivered this way and sometimes the text is so small and disappears so quickly, the player must pause and consult the game’s log. Additionally, directions are given in real time, which detracts from the current gameplay.

The soundtrack is low quality synthesizer featuring occasional mediocre trumpet solos. Many songs are recycled at length throughout the game.

To put it bluntly, One Piece: Pirate Warriors 2 is simply not designed for anyone that is not a huge One Piece fan. Big fans will probably enjoy the game as it stays very true to the feel and style of the anime. Multitudes of wacky and larger-than-life characters are featured, and most of them are playable. Each character has their own move set, but as I stated earlier, most missions can be accomplished by button mashing. Additionally, the move lists are quite long and only employ two buttons, making memorization difficult.

Those unfamiliar with the One Piece series may be immediately turned off by the game. One Piece Pirate Warriors 2 drops Luffy straight into the battle zone without much back story. Large amounts of characters are also introduced simultaneously, so if you’re not already familiar with them you will probably get lost. The game does improve a bit as more aspects are introduced. Not being a One Piece fan myself, I found most of the story difficult to relate to. Aside from the One Piece aspects, the story is generic and predictable. The ending left me underwhelmed, despite the possibility for multiple conclusions.

The camera also presented a bit of a problem. The player controls it to a certain extent with an analog stick, but the computer will sometimes move it for you. One Piece: Pirate Warriors 2 functions best when the camera is directly behind the character’s back. In the heat of battle, enemies will attack from all sides, forcing the player to move back toward the camera. Times like these would be perfect to have the computer swing the camera around, but the game forces you to do it yourself, drawing your attention away from the actual game. The position of the camera creates a massive blind spot, rendering any backward motion more challenging than it should be. Also, when the player fights near a wall, the camera may glitch in and out rapidly, causing a strobe effect — it can even become momentarily stuck in a wall.

One Piece: Pirate Warriors 2 features a complex RPG-style leveling and item system. Characters earn experience by battling, but the game also introduces the concept of coins. Found in every environment, coins boost a specific stat of whatever character they are attached to. By collecting more than one of the same coin, the player will also level up that coin, increasing its usefulness. Characters can unlock more coin slots by leveling up.

In addition, the player must choose one other character as a “crew member.” Crew members are summoned after filling their “Style” bar and unleashing a special attack. You will then temporarily control the fully powered crew member instead of the main character. Each crew member also accrues experience that will level up independent of their main character counterpart. If this sounds confusing, that’s because it is. The system is far from intuitive, and it will require a good deal of reading in order to understand.

Anyone that has played the Dynasty Warriors series will immediately notice similarities. Average enemies are virtually harmless but appear en masse. Since these enemies are so defenseless, fighting them can be tedious and boring. I often found myself bypassing them altogether, skipping to the bosses. To be fair, though, unleashing a massive special attack and watching 50-plus people go flying was pretty satisfying. There are also types of small enemies introduced later on, but they are more of an annoyance than a challenge. Repetition is the true name of this game.

Also, on the topic of repetition, check out the layout of the episodes. Each one follows a similar format: 1. Player must support ally; 2. Defeat current enemy; 3. New, more powerful enemy appears; 4. New, more powerful ally appears; and 5. Defeat new foe together. Wash, rinse and repeat.

At its best, One Piece: Pirate Warriors 2 is a fun opportunity for fans to experience the insane world of the anime firsthand. At worst, it’s repetitive, generic and mildly offensive. The developers only targeted the hardcore fan base, leaving average gamers with little to hold on to. Unless you’re a member of this group, it might be best to take a pass on this one.

By Matthew Striplen
This entry was posted on Wednesday, September 25th, 2013 at 3:48 pm and is filed under Matthew Striplen, Video Game Reviews. You can follow any responses to this entry through the RSS 2.0 feed. You can skip to the end and leave a response. Pinging is currently not allowed.