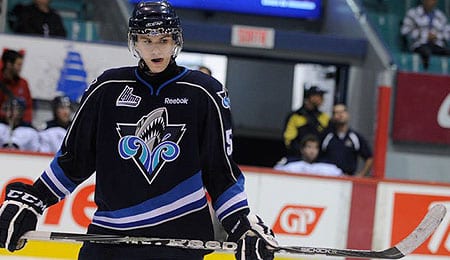 The selection of Samuel Morin 11th overall raised some eyebrows.

Editor’s Note: Philadelphia Flyers correspondent Rob Reath is back with another batch of his Flyers’ expertise, this time focusing on their draft effort’s this week.

The Philadelphia Flyers’ first pick came at 11th overall and Rimouski’s Samuel Morin heard his name called by the orange and black.

Morin stood out for Canada’s Under-18 entry at the World Championships not because of his height but rather his ability to contain loose pucks then skate six or eight feet before making a safe pass to a forward. For video evidence of his play at the Under-18 tourney, see below.

He also plays with great poise and aggression. In terms of defensive ability, there should be very little concern, and his enthusiasm for the game is obvious.

People seemed to make the erroneous judgment that because Morin is big, known to play plays hard mean hockey, and will fight, that General Manager Paul Holmgren dropped the ball and selected an unskilled player.

Our guess is those people haven’t seen Morin play. His skating is strong — especially given his size. He could stand to make tighter turns and fire that booming shot a bit more accurately, but his compete level and hunger to succeed are what sets him apart.

The kid is a keeper and will go on to a long NHL career of clearing the crease and keeping games close in his team’s favour. Those who don’t like this pick don’t like good hockey.

Robert Hagg from Sweden was the Flyers’ second pick — another defenseman, one with leadership and composure. For all the cries that Morin was not offensively skilled enough to be a first round pick, Hagg may be the answer to that criticism. Here is an all-purpose defenseman who boasts intelligence and puck-carrying skills. He has decent size at 6’2″ and over 200 pounds, he has played against men and is self aware enough to focus on his inconsistency, projected himself as being NHL ready in a year or two.

The Flyers were fortunate Hagg fell to pick 41, providing them with an opportunity to land a nice one-two defensive punch in him and Morin. It is not outrageous to suggest they may even be defensive partners one day.

Third rounder Tyrell Goulbourne was definitely the biggest surprise pick for the Flyers this year. An off the board selection to say the least, his game been likened to that of Flyers forward Zac Rinaldo. Sporting a compact frame (5’11”, 195), Goulbourne wins fights against larger opponents on a regular basis. He is an agitator and skilled fighter without much scoring touch. Still, Goulbourne’s competitive streak is a mile wide and his determination unmistakable. There was criticism that he too could have been chosen later with little risk of getting scooped up before the next round or two. Of course who’s to say whether Flyers management discovered other teams plans and circumvented them or not? That said, Unlike Morin’s case where he certainly would have been taken, there is more doubt in this case.

The Flyers continued to venture off the board with some very long range projects in D Terrance Amorosa (fifth round); Merrick Madsen (sixth round), a tall (6’4″), athletic goaltender; and David Drake (seventh round), a lanky (6’3″, 155) defenseman who’ll need some time to grow into his frame.

These players can only be considered longshots as none of them played against anything close to the sort of competition that comes from most of the premier European or North American leagues.

By Rob Reath
This entry was posted on Wednesday, July 3rd, 2013 at 11:12 am and is filed under Draft report, HOCKEY, Rob Reath, RotoRob correspondent report. You can follow any responses to this entry through the RSS 2.0 feed. Both comments and pings are currently closed.