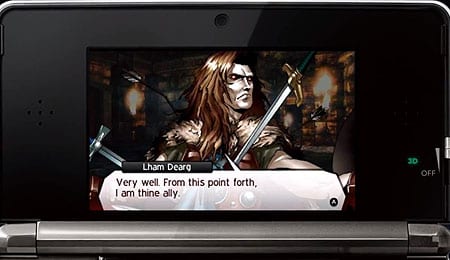 Sticking a sword in his chest convinced him to do it.

Shin Megami Tensei (SMT) was a series we considered to be in a similar boat to Castlevania or Wario, where common sense dictated there was once a mainline series without any subtitles, yet it was getting increasingly hard to find it. However, SMT was especially guilty of this because of the number of gamers not knowing it existed until Persona 4 was too good for people to ignore.

Now that I got my chance to see what the mainline series is like with Shin Megami Tensei IV, I find myself both grateful my 3DS is durable enough to withstand me chucking it out of frustration, yet still wanting to sink countless additional hours into it while checking out the other demon hunting greatness I missed out on.

SMT IV has a very clean and easy-to-use interface. The game does a fantastic job of explaining what every option does and paces itself so the player will get used to all of them very quickly. The only issue I had with the interface was that it was ill suited for using the touch screen to select commands. I prefer that to navigating RPG menus, yet here far too many options were too small even on a 3DS XL to accurately tap. Considering how intuitive using the standard buttons are, however, this is merely a small annoyance that was very easy to get used to.

This is a game that does an excellent job of working around the 3DS’ limitations. Conversations feature crisp and vibrant character models. The game employs talking heads for these, yet thanks to great writing and voice acting this never took me out of the experience.

Combat uses a first-person perspective similar to earlier Dragon Quest games and Earthbound, which is something gamers who do not enjoy this will want to keep in mind. Thanks to flashy and fun visual and sound effects for attacks, however, as well as a fantastic musical score, this was not an issue at all for me. The music is not something that made me hum it after playing, but it did make battles more intense and engaging.

Exploration is still done in third person, and while this is one of the better looking 3DS games I have played, it is the amazing art direction that really makes areas pop out. The dungeons and towns were not only very diverse, encompassing everything from a forest to a run-down city, but they are very fun to look at and explore as well.

First off, I must emphasize how good the overall combat is. Shin Megami Tensei IV is very similar to Pokemon in many ways, as your party consists of your main character and an ensemble of demons that you will recruit throughout the game. These demons have their own unique allotment of commands along with weaknesses and resistances to the elements each attack is assigned to.

This was an extremely addicting system as it manages to create an extreme sense of satisfaction from acquiring a powerful demon through recruitment, transformation (exactly like evolution in Pokemon), or fusion between two of your demons. Fusion in particular was compelling as it lets you pass on powers from the last demon, which could potentially aid in covering for its weaknesses.

Yet as much as I loved the combat, there were a few substantial flaws with this game, the most annoying of which was how it handles critical hits and misses. Both using super effective attacks and getting a critical hit gives the user an extra turn, which is given based on the number of living party members.

Awarding super effective hits works well enough as it provides an extra layer of strategy. There were many times when I wondered if I should heal my party or go for the super effective hit and hope my next demon can finish him off. Critical hits, however, are already cheap enough without additional rewards for doing nothing; and getting an extra turn felt incredibly cheap.

Meanwhile, misses are penalized by losing the player an extra turn in addition to doing nothing with the miss. Since there is no way to attack with a guaranteed hit, this creates a system too reliant on luck. This is best represented by a boss fight in which I was much stronger than every enemy in his dungeon, but I still lost to him over a dozen times in a row. Every single one of these deaths came in two turns maximum with a party at high health in which a combination of critical hits and misses single-handedly lost me the fight. Combine this with how everyone can be taken out in a few hits and this combat is ill equipped for long fights. It is only because most fights, even boss battles, last just a few turns that I enjoyed it.

This was not the only issue, either, as recruiting demons was also an issue. This involves conversations based on picking the right dialogue and giving the demon what he wants. Yet failing results in the loss of a turn and these conversations are only based on guesswork. If they score a critical hit during this, you are finished.

The worse part, however, is that even doing everything right doesn’t guarantee successful recruitment. Demons can take half my money, all my good healing items and a good chunk of my magic and health (yeah, they even ask for magic and health from you) yet leave right after this, making me feel like a chump. Quite frankly, it seems like Shin Megami Tensei IV just does not have a good sense of when to reward the player and when to punish them.

Thankfully, these are not flaws that ruin the combat. They just hurt it. Shin Megami Tensei IV still has some of the most fun RPG combat I have played, and it is only in these moments when it is hard for the wrong reasons that it stumbles — deaths caused, not by a careless move or bad strategy, but by sheer, dumb luck.

Despite being one of the most frustrating games I have ever played at times, I would still highly recommend Shin Megami Tensei IV. Its combat is flawed, yet still very deep and fun. Combine this with a good story and great world and you have the Nintendo 3DS’ best RPG to date.

By Casey Curran
This entry was posted on Wednesday, July 10th, 2013 at 12:07 pm and is filed under Casey Curran, Video Game Reviews. You can follow any responses to this entry through the RSS 2.0 feed. Both comments and pings are currently closed.