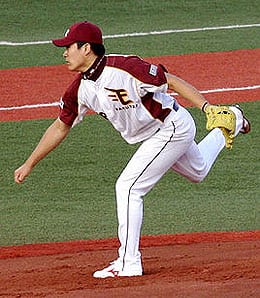 Could Masahiro Tanaka be headed to North America in 2014?

Not only did we host RotoRob’s Fantasy Baseball Weekly Podcast (heard every Thursday at 9 p.m. EST on Blogtalkradio) for a second straight week, but it actually came off without any technical glitches this time! Stop the presses!

As always, the show was chock-filled with Fantasy baseball goodness, including a look at:

Listen to the show in its entirety by clicking the play button below.

By RotoRob
This entry was posted on Friday, June 21st, 2013 at 11:31 am and is filed under BASEBALL, Podcast, RotoRob, RotoRob's Fantasy Baseball Weekly, Tim McLeod. You can follow any responses to this entry through the RSS 2.0 feed. Both comments and pings are currently closed.